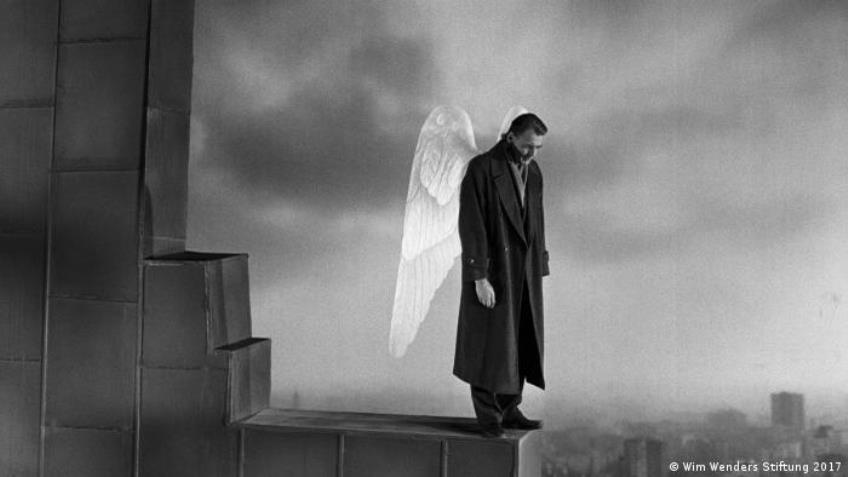 As Wim Wenders told a spellbound crowd at the Curzon Mayfair at the opening of a selective retrospective of his work, until his mid-twenties, he wanted to be a painter and loved the structure of seeing images in a frame. Like Wenders’ compatriot Ulrike Ottinger (see her autobiographical film, Paris Calligrammes), Wenders headed for Paris in the mid-1960s to pursue his passion. After art classes, he sought the warmth of the cinematheque and “by going to the loo,” he saw five films a day, many American and British, until his new passion became cinema.

All his passion and artistry went into his homage to American cinema, the Palme D’Or winning, Paris, Texas (that will be re-released in the retrospective on July 29th). But with fluent English and an improbable Teamsters Card under his belt, he became homesick and felt, ‘I had to live in America before I could return to Germany and see it.’ See it and hear it we do – specifically a divided Berlin – through the eyes and ears of German angels, Damiel (Bruno Ganz) and Cassiel (Otto Sander), in a miraculously beautiful 4K restoration of his 1987 film, Wings of Desire.

The inspirations? Many: from Wender’s Catholic upbringing to other films, like A Matter of Life and Death which also juxtaposes monochrome with colour film and where angels are jealous of humans. Then there are the angels in the poetry of Rainer Maria Rilke, or this, from his Ariel: “how sweet, how tempting: to give up all your magic and submit yourself to destiny like the others.” This is what Damiel does.

If Wings of Desire feels like two films melded together, it is an impression sustained by the director’s approach to filmmaking and his style. It may also express a symbolic wish for Germany’s unification two years before the destruction of the Berlin Wall. According to Wenders, the film was shot in chronological order (almost impossible for most films today because of cost) and ideas, as a function of available locations – the Berlin Wall scenes were shot in studio – were turned into scenes late each night. A largely silent film, Peter Handke’s dialogue was added later and recorded in voice over. The circus music and angelic fragments were composed by specialist composers and added to Jurgen Knieper’s score.

The first half of the film, shot in a subtlety nuanced monochrome, comprises Damiel and Cassiel, dressed in long trench coats with Japanese warrior hairdos, wandering through the city, listening to its mundane voices and bearing witness as they have for millennia. Only children can see the angels. Handke’s poem, Song of Childhood, with opening lines reminiscent of Paul’s Corinthians 13:11, “when I was a child, I spoke as a child, I understood as a child…” but carrying a different meaning, is a running poetic theme and builds to the powerful ending.

The angels witness a woman in labour being rushed to the hospital; a woman in a car berating her unfaithful husband; and an “in joke” from this rock and roll loving director, a scene in which a father, fed up with the noise and costs of his rock ‘n’ roll obsessed son, laments, ‘I already bought him a guitar and now he needs drums.’ A man who feels like a loser suddenly becomes optimistic that he can change with a comforting arm around him, but Cassiel fails to save a suicidal man.

The two angels meet to compare notes and flip through their log: “Twenty years ago today a Soviet jet fighter crashed into the lake in Spandau” and “fifty years ago were the Olympic Games” (which might evoke memories of the 1972 terrorist attack at the Munich Games). In one such meeting, where they sit in an empty car in Potsdamer Platz (at the time, the heavily bombed area was a wasteland), Damiel first posits the idea of “taking the plunge”: “…Sometimes I get fed up with my transcendent existence. I don’t want to always hover above. I’d rather feel a weight within.”

Unlike Hollywood and mainstream films in general (which Wenders admires but declines to direct), where everything is planned and known before filming begins, it was three weeks into the shoot when Wenders realised that they needed another character. Peter Falk was suggested perhaps for his compassionate face and Columbo’s powers of observation. Falk was a much loved character in Germany (Ganz and Sander were primarily theatre actors) since Columbo was first aired in West Germany in 1973 and indeed the public greeted him wherever he went. Wenders, who describes Falk as “gentle and funny,” recounts how he phoned him at home in Los Angeles and offered him the part of “an ex-angel,” starting immediately. Falk laughed and said, ‘I’ve done some of my best work that way’ (i.e. on the cuff).

One of the many in jokes in the film is on the plane to Berlin where, thanks to Damiel’s mind-reading powers, we hear Falk, who plays himself as an actor heading to a job in Berlin, thinking to himself, ‘It’s amazing how little I know about this part. Maybe I’ll discover it during the shoot…’ What Falk discovers is that he can feel the presence of an angel, even if he cannot see it. In one of the most touching scenes, Falk “feels” the presence of Damiel at a coffee stand and tells him what he loved about becoming human: ‘To smoke and have coffee-and if you do it together, it’s fantastic. To draw, and when your hands are cold you rub them together …’

The tipping point for Damiel, and for the film, which moves into colour mode in the second half, is his discovery of the beautiful, but lonely aerial artist Marion (Solveig Dommartin) just before The Circus Alekan (named after the film’s celebrated cinematographer Henri Alekan) is closed down. Dommartin was trained for the role and performed her own gravity death-defying stunts. In another in joke, Marion is first seen swinging under the circus roof with angel wings and the manager barks, ‘For God’s sake, don’t dangle, you’re an angel: FLY’ Here, just at the halfway point, begins a romantic, metaphysical love story. Marion and Damiel eventually meet in the crowded nightclub where Marion comes by herself to hear the Australian groups that gravitated to Berlin in the 1980s, like Crime and the City Solution and Nick Cave and the Bad Seeds who appear in the film.

‘It’s amazing how the language you grew up with forms you,’ Wenders reflects, and if Wings of Desire is a film about time and what it is to be human, it is also a film about the human need for storytelling: for keeping records and for passing them on. A principal location is Hans Scharoun’s 1960’s State Library of Berlin, and the fifth main character is the ancient storyteller Homer, who wanders the city recording it because ‘people need me’. Homer was the last role undertaken by then-86-year-old Curt Bois who, 45 years earlier, played the pickpocket in Casablanca. Homer, Damiel and Cassiel are recorders of time and stories, and so are filmmakers. The film is “dedicated to all the former angels, but especially to Yasujiro, François and Andrej” (Yasujirō Ozu, François Truffaut, and Andrei Tarkovsky).