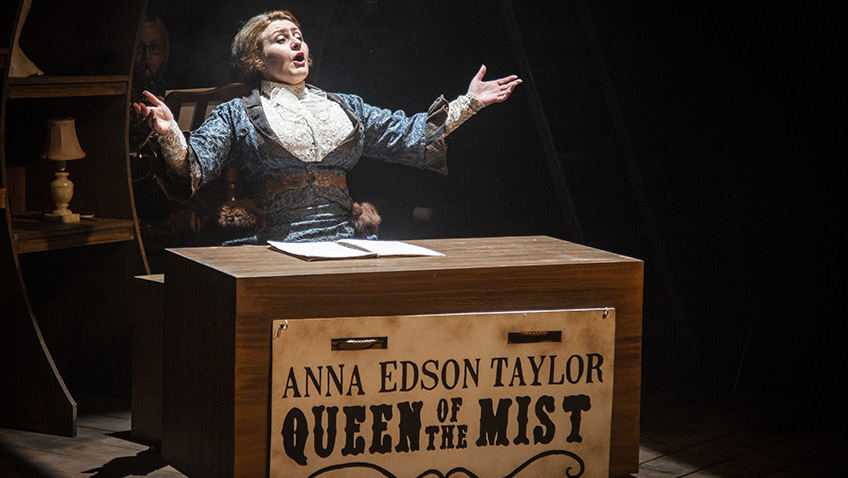 The awesome Niagara Falls have been a magnet for funambulists, boatmen and swimmers ever since daredevil Frenchman Charles Blondin famously became the first man to cross a tightrope stretching 11,000 feet over the Falls in 1860.

Michael John LaChiusa’s musical Queen of the Mist is the story of Anna Edson Taylor (1838 – 1921), an American schoolteacher who, on her 63rd birthday, October 24, 1901, became the first person to survive a trip over Niagara Falls in a barrel. 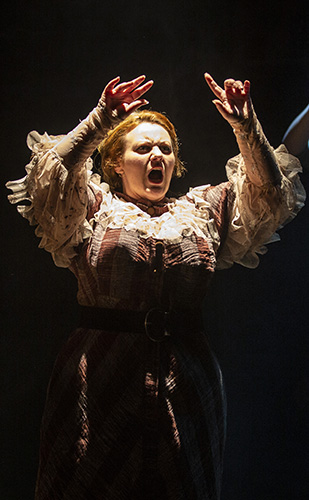 Trudi Camilleri in Queen of the Mist

“I would sooner walk up to the mouth of a cannon, knowing it was going to blow me to pieces than make another trip over the Fall,” she told the press.

Anna was a widow. Her husband had been killed during the American Civil War. She taught music, dancing and physical education but she had no students and she was broke.

She decided to take the plunge. Her motives were purely financial; but the fortune she hoped to make never materialised. She died in poverty and was buried in a pauper’s grave.

The famous Irish actor-manager-playwright Dion Boucicault was the master of sensation and his plays were famous for burning houses, exploding steamboats and people jumping off bridges and drowning.

“Sensation is what the public wants,” said Boucicault, “and you can’t give them too much of it.” But even he would have been hard pushed to reproduce the Victoria Falls on stage.

LaChusia’s flawed musical, cleverly directed by Dom O’Hanlon on a traverse stage, is a portrait of a feisty, insane phenomenon. It’s a taxing role. Anna, powerfully sung by Trudi Camilleri, is never off stage and she is singing all the time.

There are good scenes with her manager (Will Arundell) who ran off with her money and stole her barrel, and with her married sister (Emily Juler) who is embarrassed by her vulgar and unseemly exhibitionism. There is also a touching scene with a frightened World War 1 soldier (Tom Blackmore) off to fight the Hun who remembers seeing her as a child and thinks she can give him courage.