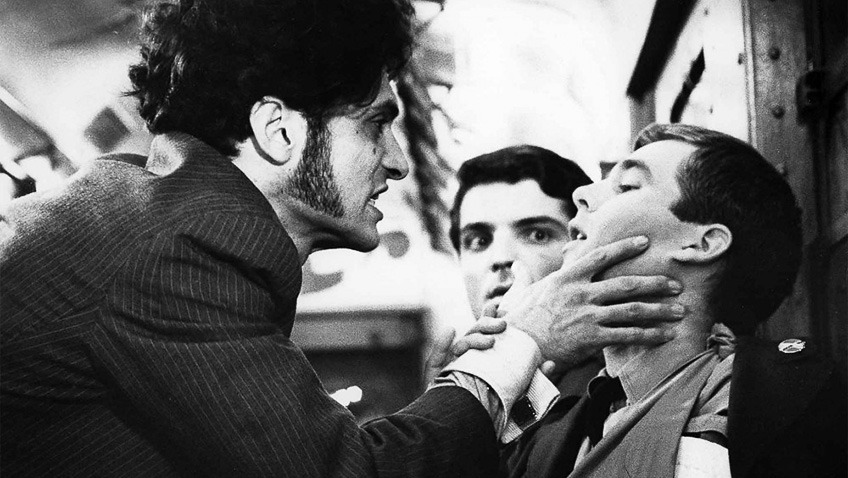 The Incident (Eureka), a powerful and chilling small budget 1967 thriller directed by Larry Peerce, is shot in stark black and white. It deserves to be much better known. Most of the action takes place on a New York subway at two o’clock in the morning. Couples and singletons get on the train. The tension comes as we wait for two hoodlums (Tony Musante, vicious, terrific, and a baby-face Martin Sheen, making his movie debut) to join them. The nastiness had begun with them beating up an old man in the street. The fourteen passengers, a cross section of society, baited and intimidated, remain passive and keep their heads down, fearful to come to anybody’s defence. It’s an uncomfortable film to watch, forcing viewers to think how they would react in a similar situation. The cast, except for two old timers, Jack Gilford and Thelma Ritter, are all Method actors. The confrontations, which feel improvised, give the production its distinct gritty period feel. The fine cast includes Gary Merrill, Beau Bridges, Ruby Dee, Brock Peters and Jan Sterling.

Shadow (Ying) (Universal) is set in Ancient China and directed by Yimou Zhang with his usual epic flair. The photography is beautiful. The images are in grey with splashes of colour. A cowardly king prefers peace to war. The intrigue at court with a Doppelganger is complex. The high spots are the choreographed duels and battles. The male fighters are taught to rely on their feminine side and fight like women. The weapon of choice is an ingenious umbrella made from shiny and slippery blades. The umbrella when turned upside down can be used as a toboggan. The army looks like giant crabs. The violence is savage.

Oh… Rosalinda!! (StudioCanal). Johann Strauss’ Die Fledermaus, the most popular operetta in the world, is updated from 1874 to post-World War 2 Vienna when it was occupied by the four allied powers. Michael Powell and Emeric Pressburger’s film is as bad as everybody said it was on its release in 1955. Hopes that they might do for opera what The Red Shoes had done for ballet are quickly crushed. The production, poorly designed, looks a mess. The actors, and particularly the chorus, are awkwardly positioned and the screen is constantly cluttered. The choreography is non-existent and the waltzing couples are never given enough time and space to really waltz. The voices are dubbed. The cast – Anton Walbrook, Michael Redgrave, Mel Ferrer, Anthony Quayle, Dennis Price and Ludmilla Tchérina – looks good on paper but the acting on screen is ham-fisted.