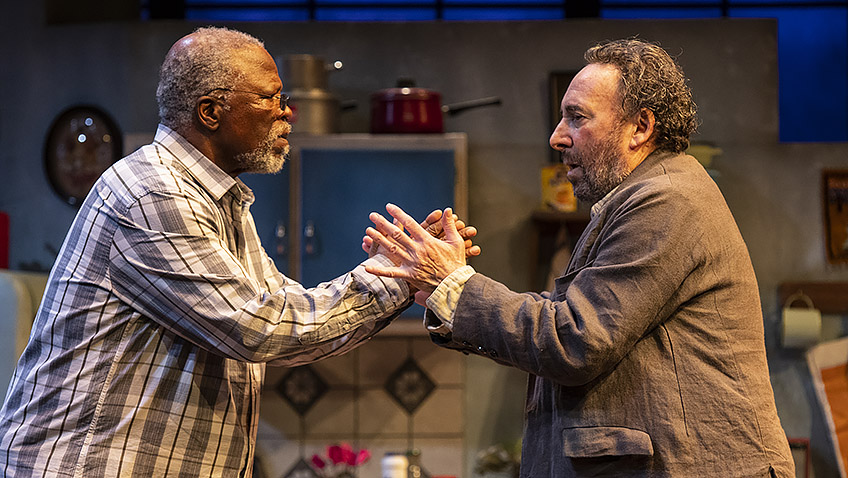 There’s been 25 years of democracy in South Africa since apartheid ended but racism and discrimination continue.

Two elderly men meet for the first time. One is a celebrated classical actor and he is dying of liver cancer. The other is his carer, a retired male nurse. The actor is South African and white and played by Antony Sher. The nurse is African and black and played by John Kani. 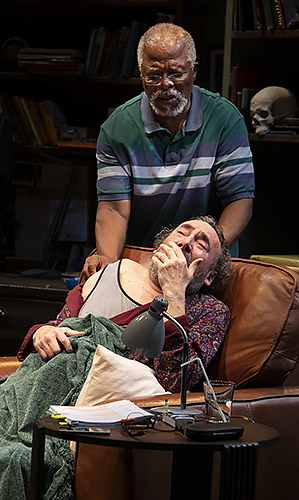 John Kani and Antony Sher in Kunene and the King

The actor is in great physical pain and cantankerous. There is a truly shocking moment (and the audience is audibly shocked) when he throws his soiled underpants in the nurse’s face.

The carer has such dignity and humanity. The actor’s tearful shame, appalled by what he has just done, is deeply moving.

Kani, actor, cultural activist and playwright, made a big impression all those years ago when he first appeared at the Royal Court with Winston Ntshona in Sizwe Bansi Is Dead, which was written by them and Athol Fugard and based on their experiences of apartheid.

Sher and Kani appeared together as Prospero and Caliban in a colonial take of The Tempest in a production directed by Janice Honeyman for the RSC and South Africa’s Baxter Theatre in 2009.

It was that production which inspired Kani to write his two-hander, Kunene and the King, which Honeyman also directs. The production is a joint production between the RSC and Fugard Theatre in Cape Town.

The two men have an uneasy relationship; but what binds them is their love of Shakespeare and their personal and political clashes gradually give way to mutual understanding and reconciliation.

When Kani was a schoolboy during the apartheid era Julius Caesar was regularly taught in schools as a warning to black students not to rebel. Sher speaks Marc Antony’s oration, Friends, Romans, countrymen in English and Kani translates it into the Xhosa language line by line.

The old actor, afraid of death and surviving on morphine and gin, is preparing to play King Lear. It is their interpretation and rehearsal of King Lear which provides some of the best laughs of the evening.