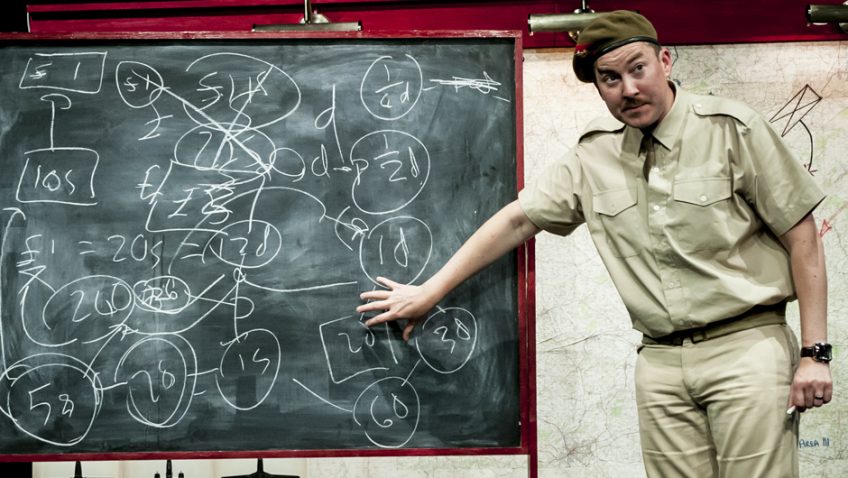 Oversexed, overpaid and over here

In 1942 the United States War Department distributed a handbook to all servicemen on British customs, character and language.

The pamphlet – fascinating wartime propaganda – gives a nostalgic insight as to how America saw Britain then and pays tribute to her courage. The GIs were told it is impolite to criticize their hosts and militarily stupid to criticize their allies. If you are a student of World War 2 this little handbook is very useful in defining what it was like to be British in 1942. The GIs offered the war-starved impoverished natives chewing gum, chocolates and stockings.

The show, a caricature of British and American culture, has been created by Dan Marsh, Jim Millard and Matt Sheahan and is performed by them.

Co-author and director John Walton’s production is immersive. The audience is treated as if they were GIs attending a crash course by two American officers, one sensible, the other idiotic, and a silly ass British officer.

The GIs learn that England is small, crowded, wet and that the English are reserved, old-fashioned, stuck-up and like warm beer.

There is a very funny lecture on British currency, which is not made any easier to follow when the blackboard becomes chaotically filled with more and more incomprehensible figures.

The second half is devoted to cricket and baseball and throwing balls at the actors. For a grand climax there is Morris dancing. The audience is persuaded to stand up, dance and wave handkerchiefs to music by Glenn Miller.

The show is the sort of jolly, over-the-top, childish, patronising silliness you might expect Oxbridge undergraduates to take to the Edinburgh Festival for a late-night cabaret spot.

I can see it having a cult following.