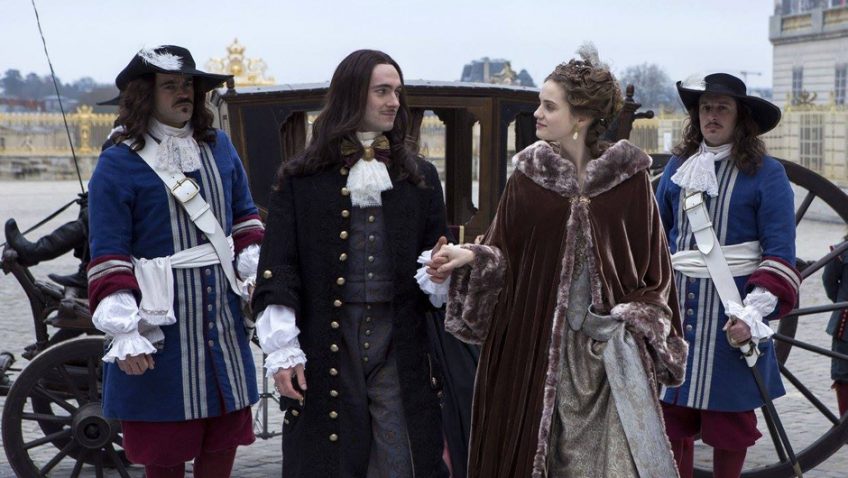 Versailles The Complete Series One & Two (Acorn). 28-year-old King Louis XIV, the Sun King, commissions the most beautiful and lavish palace in Europe and imposes his authority on the French aristocracy by forcing them to come and live with him. Versailles, his dream palace, is their prison. There are plots to kill the king. There is witchcraft and murders by poison. There is court etiquette to learn, a war to fight with the Dutch and lots of torture and lots of sex. The main plot is a power struggle between the king (George Blagden) and his openly homosexual brother (Alexander Vlahos). The production is handsome, extravagant and entertaining fiction. A fortune has been spent on costumes, wigs and locations. The first-rate cast rise above the dialogue, which is full of anachronisms and often sounds like a very bad translation.

Dunkirk (Arrow). Britain very nearly lost World War 2 before it had barely started. The entire British Expeditionary Force trapped in France was liable to be killed or taken prisoner. The Royal and Merchant Navy and small civilian boats, heavily bombarded, saved more than 338,000 men in 10 days in May/June 1940. It was one of the greatest maritime evacuations in history. This three hour impressive and emotionally involving BBC docudrama, which aired in 2004, is a moving record and tribute to courage and determination, filmed with a mixture of genuine archive footage and recreation, based on first-hand accounts. All the characters are real and there are no histrionics. Simon Russell Beale as Churchill heads a cast which includes John Carlisle, Benedict Cumberbatch, Christopher Good, Richard Durden and Rick Warden. Timothy Dalton narrates and Alex Holmes directs

Marriage Italian Style (Cult Films) is an adaptation of Eduardo de Filippo’s stage-play Filumena with Sophia Loren and Marcello Mastroianni. First produced in 1946, it was championed by both Catholics and Communists and remains the most performed of modern Italian plays. The story is set just after World War 2 in Naples, a city then renowned for the abandonment of its children, both illegitimate and legitimate. A shameless 56-year-old womaniser marries his mistress, on her deathbed, only to find that she was faking. She then drops her next bombshell. She has three adult sons fathered by three different men and she wants him to marry her so that she could give them his name. He is outraged and refuses to support them until she says that one of them is his own son. She won’t tell him which one because she knows he will lavish his affection and money on him at the expense of the other two. de Filippo (1900-1984) was Italy’s most popular playwright. When he died and lay in state in the Roman Senate, 30,000 people paid him homage.

Lola (SudioCanal). Many critics rate the prolific, controversial Rainer Werner Fassbinder’s brightly coloured 1981 satire on moral bankruptcy in post-war Germany amongst his best. A new building commissioner (Armin Mueller-Stahl), high-minded, idealistic, determines to clean up the town. Lola (Barbara Sukowa) is the mistress of the leading profiteer (Mario Adorf), a property developer, who runs a cabaret brothel. The commissioner falls in love with Lola, not realising she is a whore. Fassbinder, who died in 1982, aged 37, pays homage to Marlene Dietrich in The Blue Angel and Rita Hayworth in Gilda.

Neruda (Network).The great Chilean poet and political activist is on the run in 1948 after he has lambasted the Fascist president in parliament. A policeman is sent to catch and humiliate him. Director Pablo Larraín embraces a variety of genres – road movie, film noir, western – and takes an art house, poetic, murky, surreal approach to the man-hunt, a mixture of fact, fiction and legend, making it quite exceptional. The poet and the power of his poetry politically are for real. The policeman is an invention. Luis Gnecco is Neruda. Gael García Bernal is the policeman

Harmonium (Eureka). All you need to know about the female stegodyphus lineatus, the desert spider, is revealed in the first five minutes over breakfast. How would you react if you found out that the stranger in your home, and whom you are employing in your workshop, was a killer who had just been released from prison? Would you trust him to teach your young daughter how to play the harmonium? Would you encourage or reject his advances? And what might happen if you did either? Kôji Fukada directs this strong emotional, slow-burner, a Japanese family drama. Tadanobu Asano is the stranger, a striking presence all in white. Kanji Furutachi and Mariko Tsutsui are the unhappily married couple.