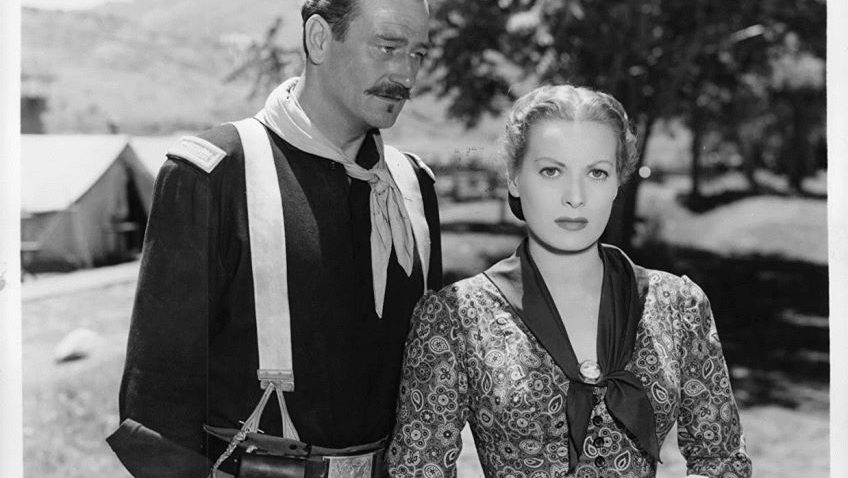 RIO GRANDE (Eureka) is the third in the John Ford/John Wayne US cavalry trilogy and, woodenly acted. It is not as good as Fort Apache and She Wore A Yellow Ribbon. Wayne is cast as the lonely commander who after a 15 years absence is reunited with his wife (Maureen O’Hara) and son who has just failed his exams at West Point and enlisted as a soldier. Victor McLagen repeats the broad oafish performance he has given many times before. When the 7th Cavalry are not chasing Apache across the Mexican borders, they are singing too many ballads. The cowboy band is so artificially introduced as to cheapen the film and bring it down to a Roy Rogers Western level. The high spots are the raids and the hard-riding horsemanship. One man rides two horses, standing on their saddles, Roman style.

EMA (MUBI) is a strange film from Chile directed by Pablo Larrain which is going to have a cult following. It is also going to irritate a lot of people. An estranged couple (Mariana di Girolawa and Gael Garcia Bernal), living in the seaport of Valparaiso, decide they can no longer cope with the six-year-old boy they adopted and they return him to the social services who farm him out to another couple. The boy had set fire to their house, burned his aunt and put the cat in the freezer. The couple blame each other. (You know what Philip Larkin said about parents.) The wife, a passionate dancer and an equally passionate flamethrower, has a fling with a firefighter, who has adopted the boy. She also has a lot of sex with a lot of lesbians.

ROMANTIC COMEDY (MUBI). How do you feel about a Rom com? Love it? Hate it? The genre has a poor reputation. Elizabeth Sankey’s documentary takes a look at the way women are portrayed and finds the genre very suspect, raising unrealistic expectations. Women are there (so it would seem) just to make men happy. Since its earliest days Rom com has been aimed at white, straight, well-heeled middle-class audiences. Sankey has high praise for When Harry Met Sally, God’s Own Country and Big Sick. She relies entirely on clips from films and a voiceover commentary. There are no talking heads to interrupt the flow of images. How many films do you recognize and can you name the actors? There over 160 clips, perfect for film buffs who enjoy a quiz.