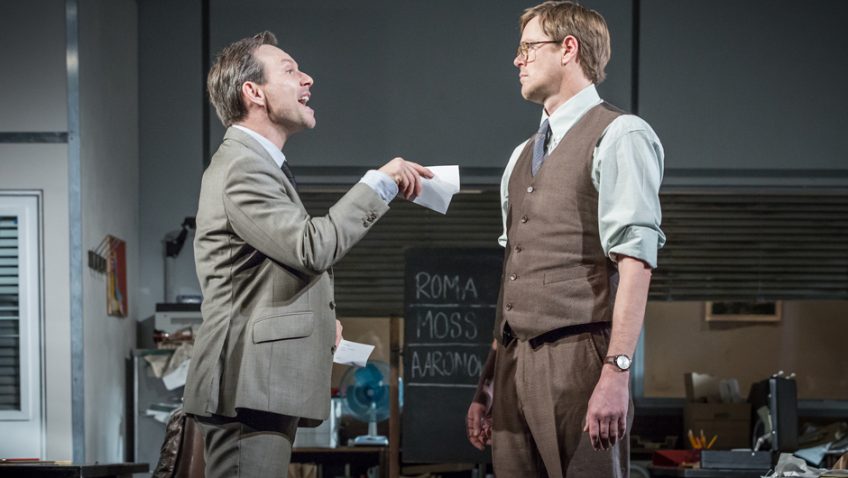 Four Chicago salesmen in real estate are fighting to keep their jobs. It’s tough. They have to prove they can close deals; but first they have to get the leads and the best leads are the prerogative of the manager.

One old salesman, on the skids, strikes a very hard bargain to get a decent lead. Two other salesmen, who haven’t got good leads, think it might be easier to steal some from the manager’s office and sell them to a rival firm. Glengarry Glen Ross is David Mamet’s best play and as damning an indictment of capitalism in the 1980s as Arthur Millers’ Death of a Salesman was in the 1940s. It premiered in London at the National Theatre in 1983.

Mamet has a good ear for the way salesmen talk and can parody, wittily, the full range of their limited vocabulary and their ability to be articulate and inarticulate at one and the same time.

The pleasure of the performance is listening to the way Mamet is manipulating the language and making it difficult to pin down what these salesmen/professional conmen are precisely saying.

The expletive-ridden argot and unfinished sentences have a rhythm and the actors have to get the rhythm right otherwise the play doesn’t work.

Christian Slater, who appeared on the London stage in One Flew Over the Cuckoo’s Nest in 2004 and in Swimming with Sharks in 2007, is the master conman, unperturbed by morality, and he gets the rhythm exactly right.

Slater heads a strong cast. Stanley Townsend is the has-been who is cock-a-hoop that he has at last made a killing. Don Warrington is the old guy who is disconcerted to find he is an accomplice because he has just listened to an idea. Kris Marshall is the shitty manager, played much younger than usual.

On the night I went in the second scene of the first act Robert Glenister froze and collapsed on stage. There was a very long wait before the play resumed.

It says a great deal for Mamet, Sam Yates’s production, the whole cast, the understudy Mark Carlisle (who had to go on with the script in his hand) and the good nature of the audience, that the play did not lose its grip.