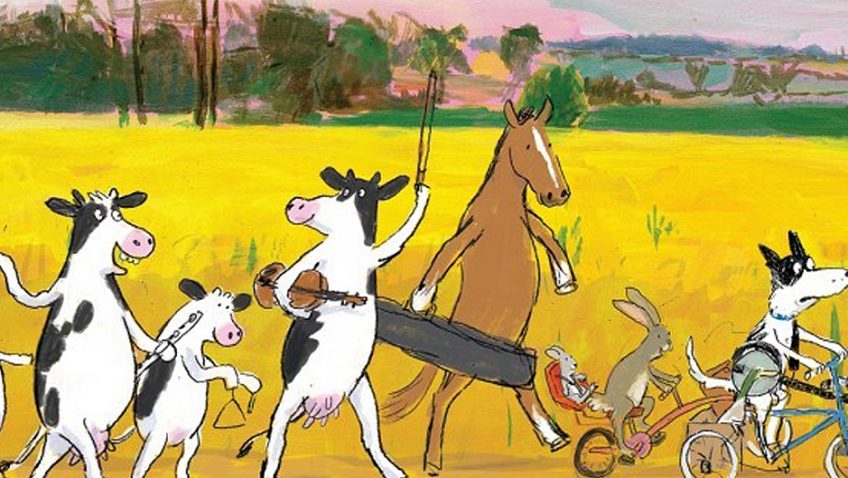 Get ready, lucky youngsters and adults around the country! Stan and Mabel are on their way again, this time in a Race for Space – in more ways than one. They’ve just had their world premiere at the Crucible – four times over, in fact, each time bringing delight and excitement to eight or nine hundred bubbly youngsters up to seven years old. In 2018, they’ll be on tour. As with previous Ensemble 360 onstage musical stories (- Crazy Creatures, Giddy Goat and Sir Scallywag and the Golden Underpants being a few of the other hugely successful delights -) they’re working closely with schools and also performing separate family concerts.

As Jason Chapman’s storybook tale unfolds, the shining enthusiasm and glittering rainbow shoes of narrator Polly’ Ives dazzle all the way, accompanied by the sparkling musicianship of revered, world-class players, Ensemble 360, serious musicians, all too keen to join in the fun and frolics. With relaxed charm, perky humour and lively expression, intrepid, engaging Polly takes charge of revered musicians and vast hundreds of lively children alike – and off we go!

Polly’s firm, good-humoured interaction establishes superb rapport with the audience as she introduces players and instruments, practises the catchy choruses and actions (like roaring and clawing), and has the kids systematically let off steam in organised ways. Then, as story and music interweave, the delightful spectacle of Jason Chapman’s beautiful illustrations create a glory of colour, humour and detail on high, to which lively movement is added via zooming and panning, and by occasionally superimposing a real child to act as reporter.

It was three or so years ago that Stan the dog and Mabel the stripy cat kept, by chance, bumping into all manner of instrument-playing animals. This time the animals they meet are not such happy beasties for, as cities and towns get bigger and bigger, the Wild gets smaller and smaller. As Stan and Mabel help them in a race for space, they head upwards in a rocket but are soon forced to find a more down to earth solution to this quest for space.

Music in the Round‘s resident composer Paul Rissman has again written music to enhance the drama, pleasing little eyes and ears with some haunting horn notes, jazzy clarinet, sad bassoon, flaunting flute, twinkling piano and a plethora of excited strings. Mozart gets an airing, too, along with an entertaining Name That Tune medley of classical snatches.

It’s all a fantastic way for youngsters to combine the excitement of a first theatre trip spectacular with the joy of vibrant, live music from polished performers. And if you haven’t yet witnessed the spectacle of serious classical musicians playing in animal costumes with horns on their heads, now’s your chance! They don’t oblige, alas, at their classical concerts for adults.

The family show will be performed in Sheffield on Nov 18th. Dates for the 2018 tour are to be announced.