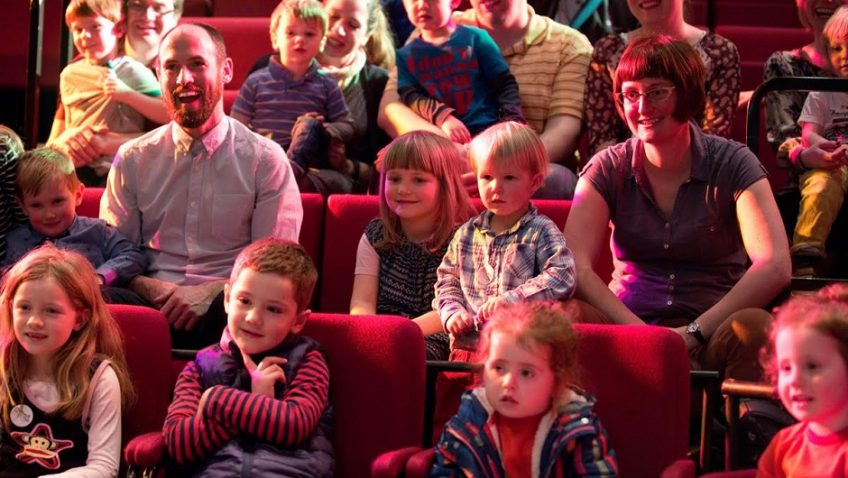 Top quality children’s entertainment, full of live musical fun and performed by world-class musicians is a rare and wonderful thing. When it comes with a good story, a screen full of big, bright illustrations, heaps of audience participation and a charismatic narrator, it’s like a sparkling gem. Chutney the Chimp last toured the land in 2012. Now he’s back, once more transforming grey, miserable Drabsville into a bright and joyful Happytown. He has to deal with a spell in jail and a megalomaniac, tree-chopping mayor first, but rest assured, in the end, the town is painted bright and beautiful, and the trees and flowers bloom freely.

To help firm-but-fun narrator Polly Ives and the fabulous musicians of Music in the Round’s Ensemble 360 tell the tale, a good deal of singing, clapping, pointing, foot-stamping, fist-waving and shouting are required. Enter, in various combinations, hundreds of children, parents and teachers! The simple sing-along choruses and actions, already enjoyed by some in school workshops or downloads, are given a run-through before the story proper begins, then off we go!

Along the way, instruments and T-shirted players are introduced in fun ways to demonstrate the variety of their magic, more of it poured into the rich, slow march from Mahler’s First, a gentle I Can Sing A Rainbow, and in the whipping up of a right old storm in Vivaldi’s Summer. Then, as the brilliantly expressive Polly Ives narrates Giles Andreae’s story and directs the action, Guy Parker-Rees’ large, bright illustrations form the backdrop as the passionate string quintet creates the changing moods with exciting music, specially composed by Paul Rissmann. An inspiration to all.

Miraculously, there was still enough left in the tank to slap delighted smiles on adult faces a few hours later (including those of a group of refugees at their first chamber music event over here) when another Ensemble 360 programme got underway in the in-the-round auditorium. Schubert’s one-movement B flat string trio sparkled first, written in 1817 when he was but nineteen; then with added second violin, Mozart’s String Quartet in D minor, dedicated to Joseph Haydn. Crowning glory was Dvorak’s powerful, vibrant String Quartet in G Op 77.With the relaxed togetherness, virtuosity, drive and drama so characteristic of Ensemble 360, breathtaking beauty was served up, Laurene Durantal’s double bass bringing lush, sonorous depth and rich texture to the heavenly blend. Wonderful.