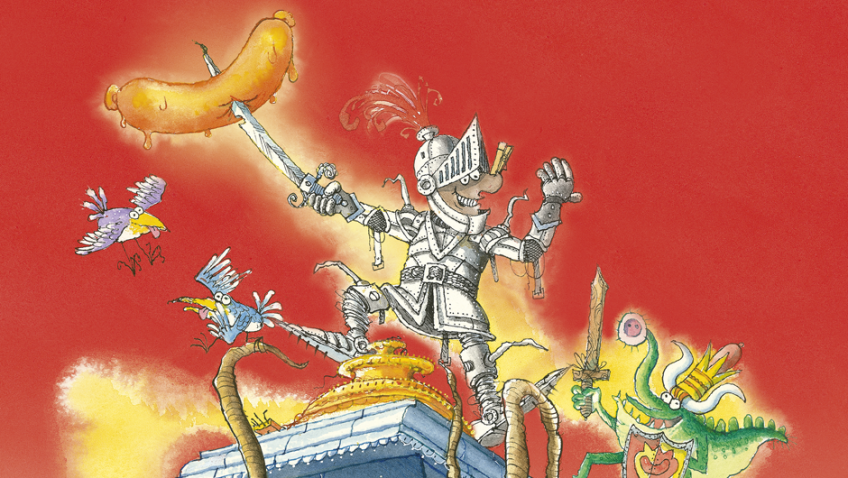 Sir Scallywag and the Battle of Stinky Bottom

What a treat it is to see several hundred 5 and 6-year olds of wide-ranging abilities pouring joy and enthusiasm into making music together. And how uniquely special, into the bargain, when their live accompaniment is performed by a group of highly revered classical musicians, all too keen to show what wondrous sounds instruments can produce, from thrilling piano trills and soaring strings to French horn raspberries.

Latest in Ensemble 360’s perky, musical story-telling series (Crazy Creatures, Stan and Mabel, Giddy Goat and Sir Scallywag and the Golden Underpants being amongst previous delights) comes a further tale of foolish King Colin. Not content with owning golden underpants, he’s now after getting his hands on the Golden Sausage of immortality. Again it’s Sir Scallywag who must gallop off on his behalf, this time to a stench-filled lake, Stinky Bottom, filled with burping, belching swamp trolls. Good thing he’s mighty, brave and bold – in spite of being only 6 years old!

After hearty introductions to the T-shirt clad players and their instruments, then a jolly run through of the songs and actions the children will be bringing to the mix, off we go! With captivating expression, warm enthusiasm and fidget-quelling charm, narrator Polly Ives takes charge of engaging the masses in rhythmic fun, rollicking silliness and great music.

Behind the performers, colourful onstage backdrops of Korky Paul’s wacky illustrations entertain in their own right as the story unfolds (again written and rhymed by Giles Andreae) and, while Polly brings the tale to life and cues the kids, the players pipe copious musical icing onto the cake.

Though Brahms and Rossini pop in for a soothing lullaby and a riotous, high-bouncing William Tell gallop, and God is urged to Save the King, the score is otherwise penned by composer-in-residence Paul Rissmann, his simple, catchy refrains for the youngsters combined with more intricate instrumental parts. After singing of Sir Scallywag the mighty, of doughnuts and baked beans and of swamp slime pies, in contrasting musical moods, the kids boogie-woogie with the swamp trolls before soothing them with a snoozy lullaby.

This is children’s (and adults’!) entertainment at its top-notch best. That’s the way to do it! And there’s a twist in the tale too, thanks to the chef’s naughty dog!

The children’s performance, in tandem with a classical evening concert, will tour soon to different venues including Carlisle, Stamford, York and Doncaster, and eventually London.

CDs are available too.