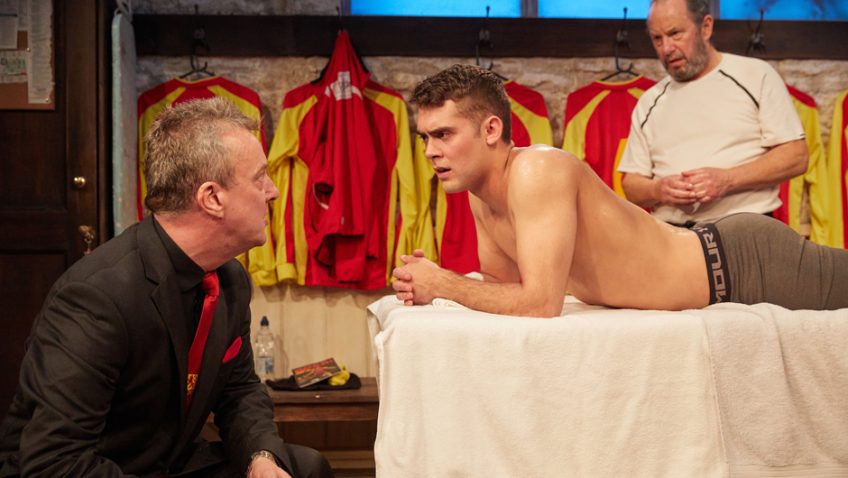 Patrick Marber’s football play premiered at the Dorfman at the National Theatre in 2015. It has now been substantially cut, amended and relocated in the North of England and feels even better.

The present 95-minute production by Max Roberts premiered at Live Theatre in Newcastle upon Tyne. It has a good cast and the small and intimate Trafalgar Studio is the right space for it. Dean Bone in The Red Lion

Marber, a life-long football supporter, who saved Lewes FC from liquidation, sets the action in the changing room of a semi-professional football team in a small town.

There are just three characters. There is a young footballer (Dean Bone) with great potential; but he also has a serious handicap which he keeps private.

He has two mentors: an old man (John Bowler), a former major player, now reduced to cleaning and ironing the team’s kit and the present manager (Stephen Tompkinson), who is bankrupt and prepared to do anything illegal to get what he wants.

These two older men fight for his soul, believing he could be their saviour.

They also represent two sides of contemporary England, one pre-Thatcher and the other post-Thatcher. The kit man, romantic and nostalgic, puts the club first. The manger, cynical and greedy, puts himself first.

The young man makes it clear he is a devout Christian and says he will not cheat, lie, fake and intimidate the referee. “It’s illegal!” he cries. Back comes the instant retort: “It’s football!”

The beautiful game is no longer as beautiful as it once was. Football and corruption go hand in hand. The Aegean stables are badly in need of a clean-up.

Stephen Tompkinson, John Bowler and Dean Bone are at the top of their game.

The North of England vernacular gives their dialogue its grit and realism and also its poetry and lyricism. Bowler’s voice is perfect for it.