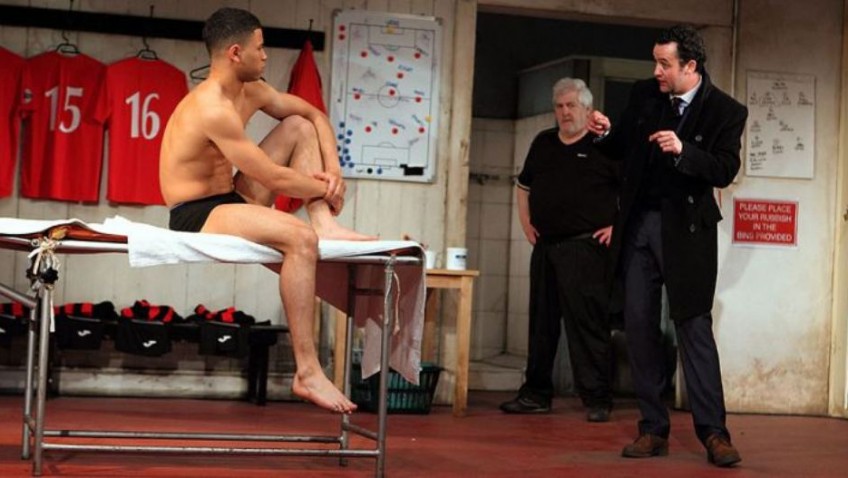 Patrick Marber and the not-so-beautiful game

The beautiful game is no longer beautiful. Football and corruption seem to go hand in hand. How long will it be before the Augean stables are cleaned out?

Patrick Marber, a life-long football supporter, who saved Lewes FC from liquidation, sets his play in the changing room of a non-league football club of a small town.

There have been more plays and musical about football than you might think: Harold Brighouse’s The Game, Peter Terson’s Zigger Zagger, John Godber’s Up ‘n’ Under, David Storey’s The Changing Room, Roy Williams’s Sing Yer Heart Out for the Lads, Andrew Lloyd Webber’s The Beautiful Game, Tom Wells’s Jumpers for Goalposts, Robin Soans’s Crush Touch, Pause, Engage and about to open, Howard Goodall’s musical version of Bend It Like Beckham.

Marber’s play has just three characters. There is a young player (Calvin Demba) with great potential and a serious handicap. He has two mentors: an old man (Peter Wight), a former manager, now reduced to cleaning and ironing the team’s kit and the present manager (Daniel Mays), who is prepared to be crooked to get what he wants. Which of the two mentors, so different in their outlook as to what is right for the club, will have the greater influence? The young man makes it clear he is a devout Christian and says he will not cheat, lie, fake and intimidate the referee.

Asked to do something he knows to be wrong, he cries out: “It’s illegal!” Back comes the immediate retort: “It’s football!”

The Red Lion takes a long time to get going; but once Marber is into the second act, the drama, directed by Ian Rickson, takes hold and Wight, Mays and Demba are excellent.