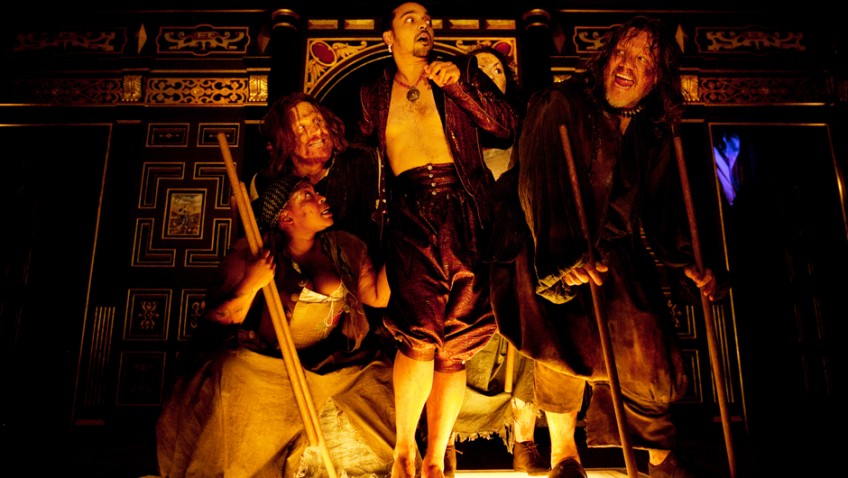 John Milton’s elaborate masque in honour of chastity, temperance, faith and honour is very rarely performed these days and is exactly the sort of courtly entertainment the Sam Wanamaker Playhouse, Shakespeare’s Globe Theatre’s indoors Jacobean theatre, should be staging.

The masque, a debate on sexual desire, was commissioned by the Earl of Bridgewater and performed at Ludlow Castle in 1634. His 15-year-old daughter and his two sons, aged 11 and 9 years, played the Lady and her brothers. The family had recently been involved in a sex scandal and the performance was an act of cleansing the family honour.

Comus, a pagan God, the son of Bacchus and Circe, is a Milton invention, created by him in his twenties. “What hath night to do with sleep?” he asks.

Comus (Danny Lee Winter), in disguise as a shepherd, meets a virginal Lady (Emma Curtis), who is lost in the forest and takes her back to his palace where he and his rout of monstrous followers attempt to seduce her. Heavily drugged, she is rescued in the nick of time by her brothers, who have certainly reached puberty in this version.

Lucy Bailey’s production adds a prologue and epilogue written by Patrick Barlow, artistic director of The National Theatre of Brent. Barlow’s contribution features the Bridgwater family and servants rehearsing the play and the daughter initially refusing to act the Lady.

Barlow also gives the daughter a spirited feminist epilogue, which is far more convincing than anything she actually says in the masque.

It might have been interesting to recreate William Charles Macready’s production with Helen Faucit or something along similar lines with really fine verse speaking, really fine singing and really fine period choreography.

What we get is a send-up rather than a masque. Lucy Bailey’s production, crude rather than carnal, is not overawed by Milton’s text. The actor most expert and funny with the interjections is Philip Cumbus.