Home / LIFESTYLE / REVIEWS > / FILM REVIEWS / This perceptive glimpse of the end of a marriage makes a slight, but engrossing film 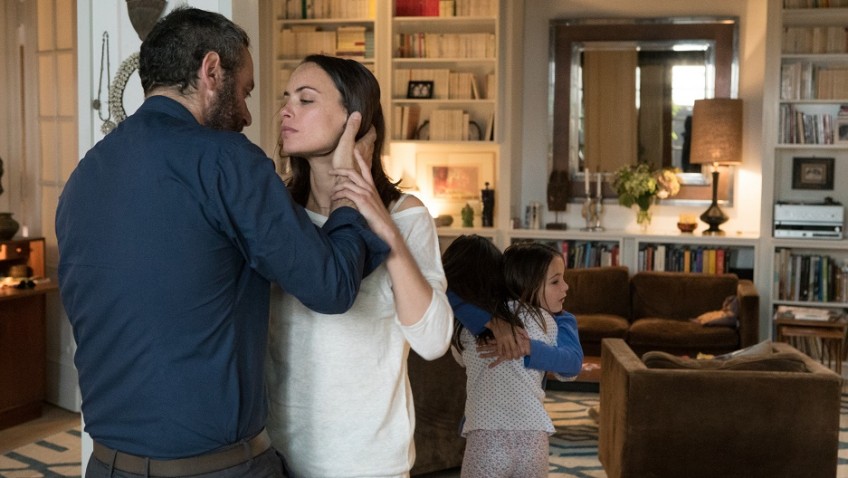 This perceptive glimpse of the end of a marriage makes a slight, but engrossing film

After Love is a fittingly claustrophobic portrait of the last days of a 15-year relationship. Marie (Bérénice Bejo) has had enough of her impecunious husband Boris (Cédric Kahn) with whom she still share a home that is not longer big enough for the both of them. Boris, in debt to loan sharks, wants half, not a third of the house’s value. Marie purchased it with an inheritance, but he claims he built in the value ended with his own designs and handy work. The film, with its single set and small cast, could be a theatre piece, but it also seems like a variation on a theme that preoccupies Belgium co-writer/director Joachim Lafosse.

In this perceptively written and well-directed chamber piece, Marie and Boris vent their anger and frustration, often in front of their adorable twin daughters (Jade and Margaux Soentjens), in arguments that are, in at other times, softened by sorrow and the dying embers of love. The child actresses are so good that we have no problem imagining that there was once a happy routine and family life in the house that is now filled with tension.

Lafosse co-wrote the script with three other writers, one of whom is Mazarine Pingeot, the daughter of Francois Mitterand and his art historian mistress, Ann Pingeot. No doubt she has a personal perspective on a child’s reaction to separation. There is no plot or even much of a story, and what action there is is confined to movement throughout the rooms and a front courtyard that serves as a dining room. The writers nonetheless hold our attention by their selection of carefully modulated scenes that relax and build tension. After a dinner that Boris prepares, the girls put on a record that the family used to dance to and they begin to dance. Silently, and with big smiles on their faces, they draw first their father and, then their mother together to join in. It almost feels like a calculated ploy straight out of that Haley Mills movie, The Parent Trap But this moment of hope is an isolated, flickering ember. We are, like the guests,out of our comfort zone at Marie’s dinner party where the subject turns to Boris. Marie tells her friends, who include a handsome man on his own, ‘I hate him; his way of walking and standing and his every remark. I can’t be in the same room as him.’ At that moment Boris walks in and does not take much convincing from an uneasy mutual friend at the table to join the group for a drink. Boris asks (making it clear he knows the answer) if they were talking about him. Taking over the space and helping himself to bread and cheese as well as wine, Boris is goading Marie and she does her best to remain in control. She urges the guests to remain for the cake she has baked, but everyone has lost their appetite.

Marie’s mother (well played by 71-year-old Marthe Keller) isn’t helping. There is money to be made from the sale of Marie’s father’s house but it needs to be fixed up for a sale. In front of Boris, she proposes hiring him for the job, but the last thing Marie wants is an excuse to prolong the relationship.

There have been several noteworthy movies about the break-down of a marriage, arguably the most famous being Kramer vs. Kramer, but After Love feels like part of a prism of dysfunctional scenes of family life. We see a pattern emerging with Lafosse’s 2006 film Private Property in which the ex-husband’s divorce settlement that benefits two grown twin sons living at home, keeps their mother a virtual prisoner and frustrates a new relationship. In Private Lessons, a young boy failing at school is left vulnerable to child abuse after the break down of his family, while in Our Children (reviewed on this website 10 May, 2013), based on a true story, a mother of six, pushed to breaking point by her weak husband’s domineering adoptive father, kills her children. In last year’s, White Knights, a group of vulnerable African orphans are – and we can draw our own conclusions – either saved by altruistic do-gooders or kidnapped by a shady NGO crossing the line between charity and illegal trafficking.

While the warring parents take centre stage, it is clear from Lafosse’s body of work that we should be worrying about the children, particularly at an age when they hear everything but personalise much of that, often feeling responsible for their parents’ arguments. It is interesting, too, that Lafosse returns to his casting of twins here.

Bejo’s performance is closer to her role in The Past than to her break-out role in The Artist, and she is perfectly cast. She goes about her daily routine as if she has done it a thousand times and her relationship with the two children is so natural that you have to see the credits to believe that they are not her own. Cédric Kahn, best known as the writer/director of three terrific thrillers: Roberto Succo; Red Lights and The Airplane, gives arguably his best performance to date as an actor. He, too, is a natural with the children and you feel his fear, sadness, bitterness and even vulnerability in every glance. Boris knows he is tormenting Marie by offering to do the building work and joining in her dinner party, but he is desperate to keep a foot in the door and remain part of the family a little longer.

After Love would make a good double bill with Kahn’s little known film, Les Regrets (Regrets) about an architect who bumps into a woman he loved madly but hasn’t seen in 15 years. Both are now married, but when she invites him over for old time sake, their former passion is reignited. In After Love, Marie seems eager to move on, but in the final scene of the film, the two sit deep in thought barely hearing what the lawyers are saying. Perhaps the regrets are already stronger than the relief.