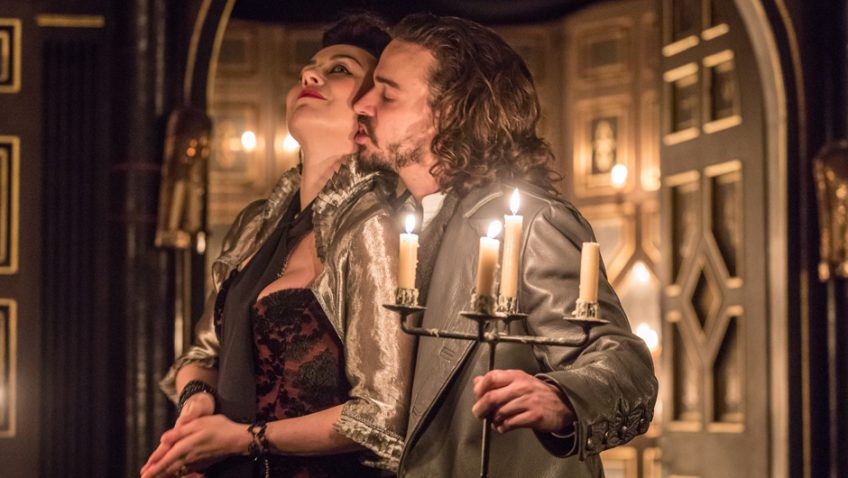 The Sam Wanamaker Playhouse, the Globe’s intimate indoor 17th century theatre, with its oak structured horseshoe auditorium and ornate ceiling and stage doors, was built specifically for the Jacobean repertoire.

I sat in the Pit for the first time and liked it very much. Kate Stanley-Brennan in The White Devil

The theatre is lit by candlelight, chandelier and handheld, which is perfect for The White Devil, John Webster’s dark chamber of horrors.

Webster was not happy with the play’s reception at the premiere in 1612 and dismissed the audience as “ignorant asses.”

He would have been delighted with the audience’s enthusiastic reception at the press night of Annie Ryan’s production.

Jacobean audiences liked nothing better than sadistic, gory melodrama; the more murders the better, a stage filled with corpses made for ideal entertainment.

The characters are cruel and violent, obsessed with corruption and death

The story is based on some notorious murders which had actually happened in Italy thirty years earlier. One of the murders took place in a church during High Mass with the connivance of the Church.

The play was very popular in the 17th century but completely ignored in the 18th and 19th centuries.

The horrors can still surprise and shock. Two murderers disguise themselves as monks and strangle their victim whilst performing the Last Rites

Vittoria (Kate Stanley-Brennan) persuades her lover Bracciano (Jamie Ballard) to murder her husband and his wife with the help of her brother, Flamineo (Joseph Timms)

Vittoria is arrested and put on trial and this is one of the play’s high spots. The Cardinal sentences her to a “house of penitent whores.” His description of a whore is a memorable tirade.

No less memorable is Vittoria’s retort at his sentence: “A rape! A rape! You have ravished justice!”

The actor who makes the most impact is Joseph Timms but then he is playing Flamineo and Flamineo is a flamboyant villain. He has a great scene when he and two women are brandishing pistols at each other. Who will shoot who first?