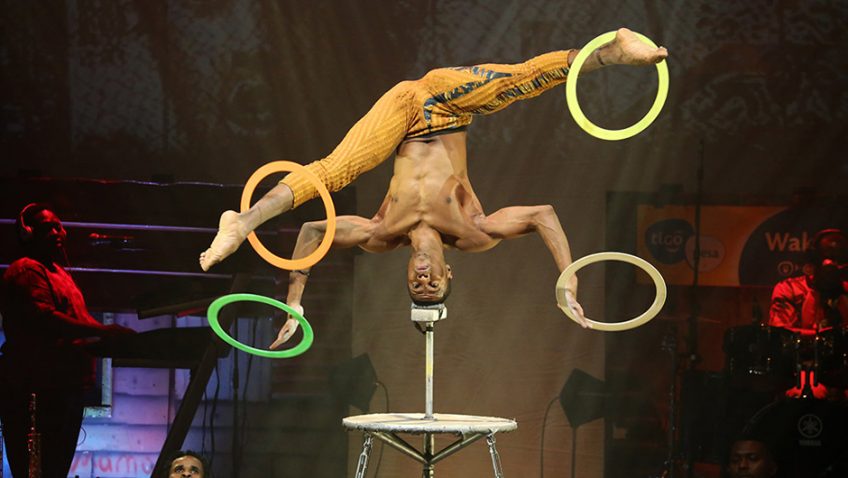 Mother Africa is billed as an acrobatic extravaganza of circus, dance and live music.

The show is conceived and directed by Winston Riddle who opened a Circus School in Tanzania in 2003 and founded Mother Africa in 2006. It is not a West End show with high production values. It’s much nearer to a circus and the ideal venue for it would be a Big Top.

The performers are drawn from South Africa, Tanzania, Ethiopia and Ghana and they offer amazing and precarious stunts

Another couple, Thomas Teka Alemu and Tamrat Yemane Ayalew, have a breathtaking act in which he lies on his back and she lies on his upturned feet and he juggles her with his feet, throwing her in the air and she, somersaulting, lands back on his feet.

Mohammed Tadei Mohammed does hand stands and a balancing act on a variety of totally unsafe objects, piled high. It is so dangerous that you presume Health and Safety does not exist in South Africa.

There’s a live band on stage throughout. The dancing, however, is merely energetic street dancing.

The show has to be seen within the context of the show’s sub-title: Khayelitsha – My Home.

Khayelitsha is a township of 2.4 million in Western Cape, South Africa, located on the Cape Flats in the city of Cape Town. 50% are under 19. 73% are unemployed. 70% live in shacks

Mother Africa is a source of education, encouragement and pride. It lasts 120 minutes, including interval, and is aimed at family audiences. Children under 16 go half price.