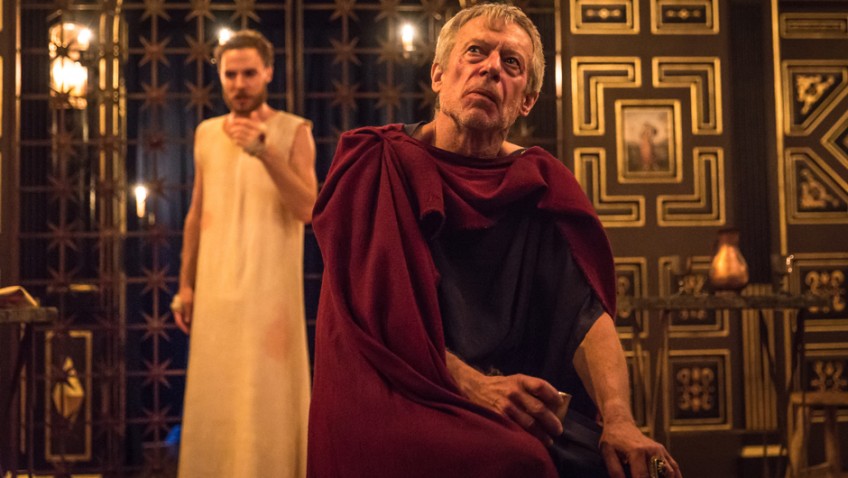 A meeting of Caesar and Christ Samuel Collings (Jesus) in The Inn at Lydda

The Caesar Jesus was referring to was the stern, taciturn and highly unpopular Roman Emperor Tiberius, described by Pliny as “the gloomiest of men.”

John Wolfson bases his play on an incident recorded in a book called The Death of Pilate which can be found in the New Testament Apocrypha.

The mortally ill Tiberius (Stephen Boxer) hears Jesus is able to heal the sick and decides to journey to Judea and be healed by Him, only to find, when he arrives in the Holy Land, that he is too late. Jesus had been crucified three days earlier.

Wolfson, curator of rare books and treasured friend of the Globe, imagines a meeting between the risen Christ and the Emperor in a brothel in Lydda and wonders if Christ will heal a brutal mass murderer?

I presumed the play was going to be serious and was much surprised to find it was so trivial, banal and silly.

32 years on the Magi are still alive and haven’t aged. The trio (headed by Joseph Marcell) would not be out of place in Monty Python’s Life of Brian. Similarly, Tiberius’s astrologer (David Cardy) is a role for Frankie Howerd in his Up Pompeii mode.

Caligula (Philip Cumbus) and his pretty dancing catamite (Chris Lew Kum Hoi) are as camp as camp can be. Caligula will become Emperor when Tiberius is dead and it is he, who, in the play’s most arresting speech, prophesies that the carnage created in the next two thousand years by Christians will be far greater than anything done by the Roman Empire.

John, the apostle (Matthew Romain) who describes himself as a writer and teacher, is already quite mad and wearing an off-the shoulder blazing red evening gown.  It is John, who witnesses the meeting between Christ and Tiberius; and it is listening to what Christ says which will inspire him to write the apocalyptic Book of Revelation.

The Art world and indeed the film world have produced so many images of Christ – El Greco, Leonardo da Vinci, Velazquez, Holman Hunt, Max von Sydow, John Caviezel, etc, etc – which are all quite different and yet conform to the same idea.

But Samuel Collings, wandering around in a white shift, intellectually, physically, is no more believable as Jesus Christ than Declan Bennett was in Jesus Christ Superstar in Regent’s Park in July.