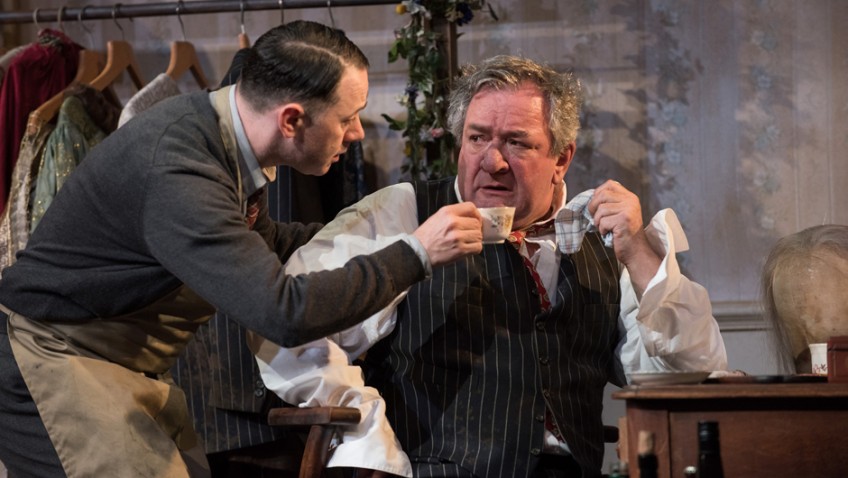 Reece Shearsmith in The Dresser

It was last seen last year on television with Anthony Hopkins and Ian McKellen as pro and dresser. It is now back in the West End with Ken Stott and Reece Shearsmith in a production by Sean Foley.

The Dresser could well be a minor modern classic. Its depiction of life back-stage whilst on tour has an authentic 1940s wartime feel to it.

Ronald Harwood worked with Donald Wolfit for five years and though the play is not about Wolfit, Harwood acknowledges the play clearly draws on that experience.

Wolfit, an actor-born out of his time, was the last of the great virtuoso actor‑managers. A barnstormer, he would have flourished in the Victorian age and indeed in the age of Garrick.

Wolfit was infamous for surrounding himself with inferior actors so that he could shine all the more.  He was never afraid to ham it up and upstage everybody. His greatest role was King Lear.

Ronald Harwood’s actor, known only as Sir, is a spent force, who has to be coaxed and bullied into his make-up and costume and then on to the stage by his dresser.

Sir is touring tacky productions of Shakespeare in the provinces during World War 2. He is leading a company of “old men, cripples and nancy boys” (all the young actors have been called up). Bombs are falling and he is about to play his 227th King Lear.

The play concentrates on the relationship between Sir and his dresser and the parallels between them and Lear and the Fool.

Ken Stott is a magnificent, selfish, egotistical, crumbling, sobbing old ham.  Reece Shearsmith as the devoted dresser is giving the best performance I have seen him give: camp, waspish, sad, lonely, bitter, and finally deeply moving.