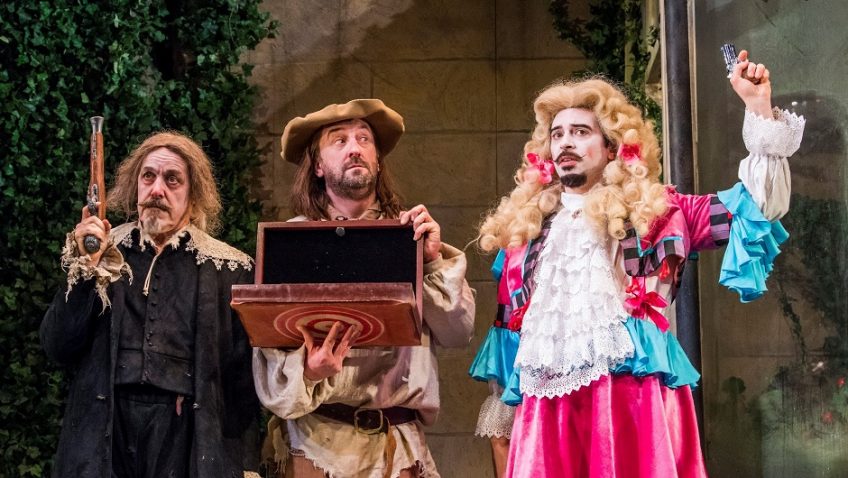 Molière is much better than this production would suggest

An opportunity to see a play by Molière is rare these days. So it is doubly unfortunate that director Sean Foley does not think Molière is funny enough for today’s audiences and has decided to adapt The Miser very freely. Foley and his co-adaptor Phil Potter want to create a modern comedy idiom that can be as rugged and playful for modern audiences as it was for 17th century audiences. The Miser premiered in 1668

“I think what we have done,” says Foley, “is utterly faithful but totally irreverent with the source material.”

Molière spent 13 years in the provinces before he hit the big time in Paris. Equally adept with verbal and physical comedy, he learned his craft, as an actor and as a dramatist, in farces which were inspired by the commedia dell’arte. His characters are all taken from stock but given a new life.

Molière raised Comedy to the same status as Tragedy. His satires are comic but they are also serious, psychological studies of obsessions.

What Foley has done is to take Molière’s play and emphasize its commedia dell’arte source, a retrograde step.

“I don’t know if any straight actor would survive in this production,” says Griff  Rhys Jones, who has not been on the London stage since he appeared as Fagin in Lionel Bart’s Oliver!

Harpagon’s high spot is the great Act IV soliloquy when he discovers all his money has been stolen and madly harangues the audience.

Lee Mack is making his West End debut. This is the first play he has ever done. His longtime experience as a stand-up comedian stands him in good stead when it comes to interacting with the audience and ad-libbing. Mack has the comic role of servant who is also coachman, cook and hangman and he wears a different hat for each role.

Foley’s sledgehammer production, a series of over-the-top comic routines by comedians, misses out completely on the seriousness and the pathos. And the actors shout too much. The worst offender is Katy Wix.

What is needed now is a production of one of Molière’s plays which shows what a great playwright he is.

The production would have to be as classy and as innovative and as superbly acted as John Dexter’s Le Misanthrope, Roger Planchon’s Tartuffe and Steven Pimlott’s The Miser. Pimlott took Harpagon very seriously indeed.

How about a revival of Les Femmes savants? It was one of Molière’s most popular plays.