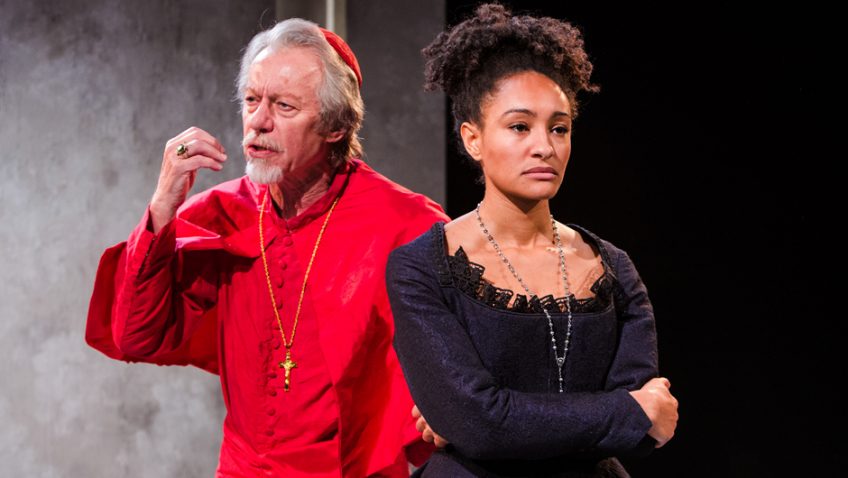 Now Troupe becomes even more adventurous and stages James Shirley’s The Cardinal, which premiered in 1641 and was one of the last plays of King Charles I’s reign. Marcus Griffiths and Natalie Simpson in The Cardinal

In 1642 Charles was beheaded and the Puritans closed the theatres. Actors were declared to be vagabonds and rogues and liable to be whipped if caught performing. Audiences were fined five shillings.

James Shirley (1596—1666), a prolific writer of romantic comedies and tragedies, and a Roman Catholic convert, was renowned in his day. He and his contemporaries thought The Cardinal was his best work.

It acts like a watered down Jacobean drama. The language is not so rich and the court is not so decadent; though the play does end with four of the leading characters dead, murdered, poisoned.

Shirley is not as good as John Webster and John Ford, but his play is interesting and he is exactly the sort of playwright the major fringe theatres should be reviving. Justin Audibert directs a strong cast.

The widowed Duchess Rosaura (Natalie Simpson) marries Count D’Alvarez (Marcus Griffiths) against the wishes of the devious Cardinal who wants her to marry his nephew, Columbo (Jay Saighal).

Columbo, a general well versed in killing, murders D’Alvarez on his wedding day during a dance/masque too celebrate his marriage.

Rosaura, an attractive and resourceful woman, superior to king, courtiers and lovers, refuses to kowtow to the Cardinal and, Shirley taking a tip from Hamlet and The Duchess of Malfi, has her feigning madness in order to exact her revenge.

The Catholic Church in plays of the Caroline Jacobean eras always comes out as the major villain. It is said that Shirley based the Cardinal on Archbishop William Laud, senior advisor to Charles I and confident to George Villiers.

The Cardinal, ambitious, hypocritical, corrupt, a crafty devil, is not quite in the league of Cardinal Richelieu, but he does attempt to rape the Duchess. Stephen Boxer in scarlet is fully aware that the Cardinal’s prodigious wickedness makes him a bit of a comic character.