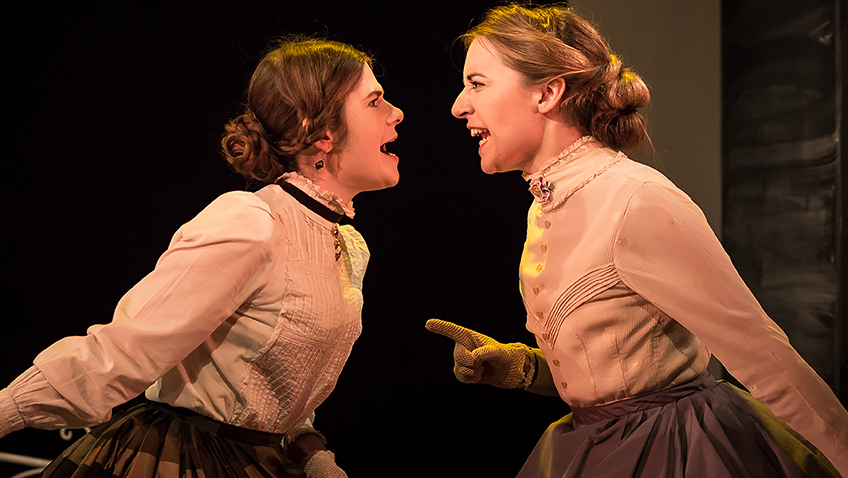 The first London production for over 150 years

There will be very few people who have even heard of John Pratt Wooler (1824-1868) let alone having seen his comediettas and farces.

If you want to catch up with British theatre history, then Neil McPherson’s Finborough Theatre is where you have to go.

Wooler’s A Winning Hazard was the one-act play with which Marie Wilton opened the refurbished Prince of Wales Theatre in Tottenham Court Road on 15 April, 1865. 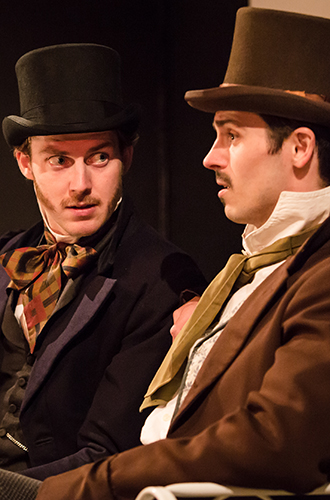 Max Marcq and Edward Mitchell in A Winning Hazard

Phillip James Rouse is directing a lively triple bill of Wooler’s light-hearted pieces which once served as curtain raisers and which were very popular with Victorian theatregoers.

Two young men (Max Marcq and Edward Mitchell) who need to get married if they are not to be disinherited, fake a duel in order to win two young ladies (Josephine Starte and Evelyn Lockley). The funniest scene is when these toffs are disparaging each other with the most outrageous lies.

Allow Me to Apologise, a farce, which was written 15 years earlier, suffers from having immediately to follow A Winning Hazard without a decent break. It just seemed more of the same and the actors were shouting far too much.

A man (Edward Mitchell), who has proposed marriage to two women, feigns madness, to get himself off the hook. Meanwhile, a woman (Jasmine Blackborrow) has disguised herself as a man and fooled another woman (Josephine Starte) into falling in love with her. Rouse adds a blatantly modern LGBT denouement which jars.

Orange Blossoms, which dates from 1862, admits it owes something to Shakespeare’s Benedict and Beatrice in Much Ado About Nothing. A man (Max Marcq), who is a woman hater, and a woman (Jasmine Blackborrow), who is a man hater, abhor marriage. So you can guess what happens.

The trouble with putting on three curtain-raisers one after another is that they don’t work so well together as they would individually.

Wooler described A Winning Hazard as “a little light dish before the main meal.” This is true of all three plays and they really do need something more substantial to go with them.