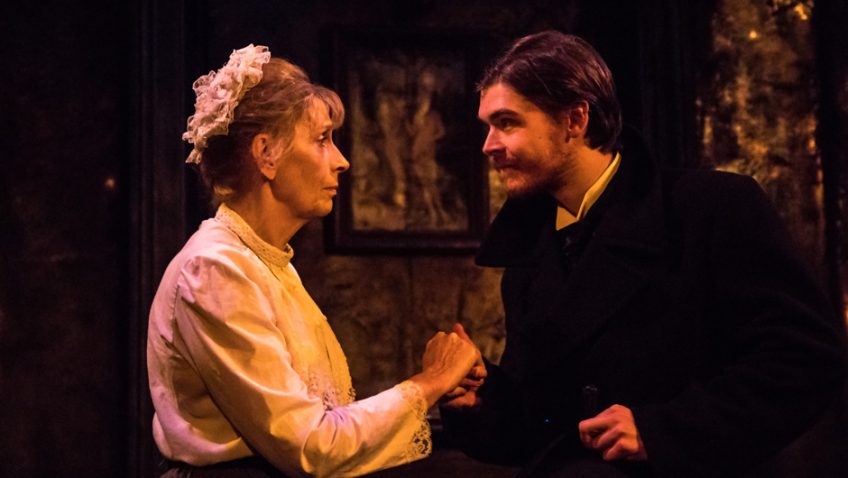 An Edwardian morality play gets a well-deserved revival

Robert Tanitch reviews The Passing of The Third Floor Back at Finborough Theatre, London SW10

Once again Neil McPherson, artistic director of Finborough Theatre, revives a famous play, which has not been seen in years, an invaluable service for all those who are interested in theatre history.

Today, Jerome K Jerome is known only as the author of that classic comic novel Three Men in a Boat but in 1908 he had a huge box-office success with his modern morality play. Edward Wolstenholme, Alex Knox and Graham Pountney in The Passing of The Third Floor Back

The lead role was created by one of the finest actors of the day, Johnston Forbes-Robertson whose elocution and grace were much admired. He kept reviving the play over the next five years.

The Passing of The Third Floor Back is described as “an idle fancy in a Prologue, a Play and an Epilogue.” The setting is a third-rate boarding house in Bloomsbury.

The characters are listed in the programme by, their sin not their name: a cheat, a slut, a painted lady, a shrew, a snob, a bully, a hussy, a satyr, a coward, a rogue and a cad.

A Stranger, a Christ-like personage, arrives and immediately starts converting them, one by one; appealing to their better selves and praising them for the good qualities they did not know they had.

The play (taking its inspiration from Psalm 122:9: “I will seek thy good”) was highly praised in churches and chapels throughout the UK and USA.

The theatre critics were less keen and found its pseudo-religiosity mechanical, banal and tedious; more of a sermon than a drama. The characters were dismissed as puppets, mere thumbnail sketches. Max Beerbohm said Jerome was a tenth-rate writer. The critics were wrong.

Director Jonny Kelly’s skilful handling of 12 actors, when they are all on stage at the same time in a tiny space, is a miracle in itself. Jasmine Swan’s set is beautiful.

A first-rate ensemble is headed by Alexander Knox as the saintly Stranger, Anna Mottram as the cheating landlady, Graham Poutney as the bullying major and Paddy Navin as the painted lady who is persuaded to remove the rouge on her cheeks and the dye in her hair.

Lizzie Faber’s gentle harp playing throughout is an essential part of the revival’s success.