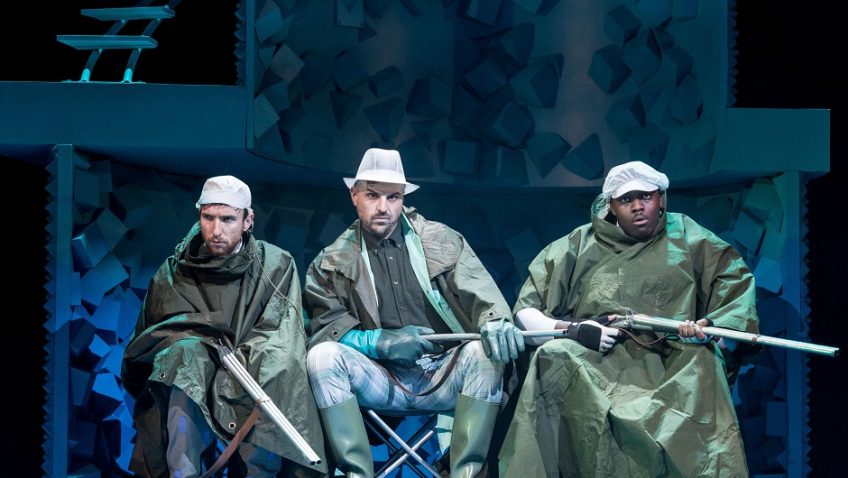 Roald Dahl was an enormously successful writer of children’s books and his stories have been turned into plays, films (big screen and TV), musicals and even operas. I think I have this thing where everybody has to think I’m the greatest. And if they aren’t completely knocked out and dazzled and slightly intimidated by me, I don’t feel good about myself.

OK, it was not You Know Who; though it could have been, couldn’t it?

It was said by Mr Fox, who outfoxes three mean, ugly and very nasty farmers with the help of his feisty wife, a blind Mole, a studious Badger, a cheesy Mouse and a brainless Playboy Bunny Rabbit.

Dahl’s story is a satire on capitalist greed and a simplistic moral fable about working together for the common good. It was first published in 1970; but in the knowledge that the USA has just been trumped, its staging could not be timelier.

The best Fantastic Mr Fox version I have seen was Wes Anderson’s stop motion animation. The puppet animals, all dressed in human clothes, were delightful. It’s a hard act to follow.

George Clooney is the definitive Mr Fox, suave, debonair, vocally perfect; and the advantage he had over the present actor Greg Barnett was that he looked like a fox. He had a great fox’s head.

The actors in Maria Aberg’s production look like children pretending to be animals and they behave like primary school children.

The adaptation is by lyricist Sam Hollcroft and composer and lyricist Arthur Darvill.

The egotistical and philosophical Mr Fox is now not as clever as he makes himself out to be and Tom Scutt’s set looks more urban than countrified.

The small-scale touring production is aimed at family audiences and particularly young children. It has to be judged for what it is. It’s not a big West End show like Matilda, Charlie and the Chocolate Factory and Chitty Chitty Bang Bang.

The high spot, the wittiest, the funniest moment, is when the farmers find their inner fox.