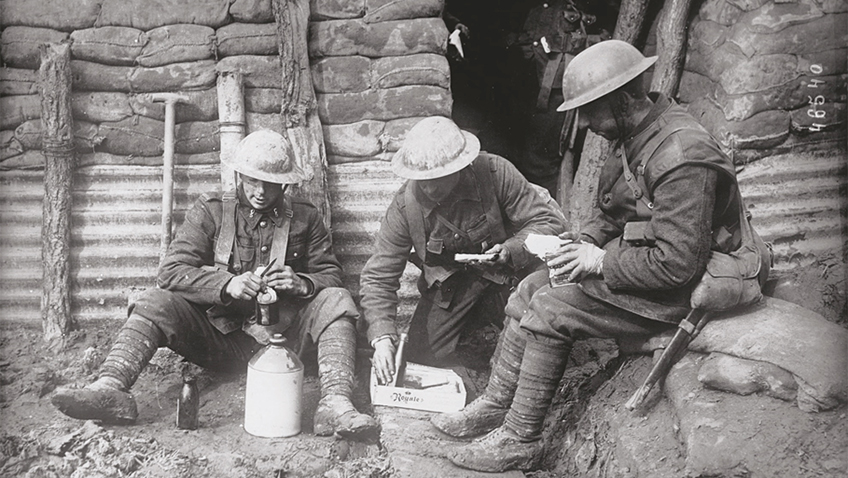 At the start of the First World War, Britain was the only major power involved without a large-scale standing army, with an armed force of approximately 700,000 soldiers. In sharp contrast, the German Army consisted of a staggering 3.7 million men.

Realising that Britain needed a much bigger fighting force, Lord Kitchener, The Secretary of State for War, introduced a system of volunteer recruitment. Famously, Kitchener appeared on recruitment posters with the slogan, ‘Your Country Needs YOU!’ and the call went out for people to enlist. This approach was hugely successful and vast queues quickly formed outside recruiting offices up and down the country. By the end of 1914, over 1 million had volunteered.

In theory, men had to be 18 years old to sign up and 19 before they could be involved in active service overseas, but overtaken by the patriotic fervor sweeping the country, many youngsters, some as young as 12, signed up, lying about their ages and often giving false names.

As most people thought that the war ‘will be over by Christmas’, a blind eye was turned to this practice; many thought that it would do youngsters good to join the army and if the volunteers were deemed fit, healthy and keen to join up, why stop them?

Some underage soldiers left their trenches without permission after months under fire and constant bombardment. Many were shot at dawn for desertion ‘in the face of the enemy’; their families simply told that their youngsters were missing. Sadly, some killed in action were unidentifiable due to the false names they’d given, leaving families unaware of what had happened to their children.

One of the few in authority to take the issue of underage recruitment seriously was Sir Arthur Markham, Mansfield’s Liberal MP. He worked tirelessly to get the practice stopped and for all underage recruits to be returned home. He raised numerous questions in the House of Commons and received thousands of letters from parents all over the UK, anxious about the whereabouts of their children. Many believe that the effort of his campaigning caused his death in 1916, at only 50 years of age.

Conscription was introduced to the UK (except in Ireland) at the beginning of 1916, superseding the volunteer process and in June the War Office agreed that if parents could prove their child was underage they could be sent home, unless the recruit wanted to stay or if the unit refused. Some were held in holding camps until they came of age and then sent back to the front.

In 2007, Jo Riley first heard about Sir Arthur Markham’s work and the issue of underage recruits in WWI. Being from Mansfield herself, she decided to bring Sir Arthur’s work to the attention of the local community. Jo started her research and the more she delved into the archives, the more the plight of the youngsters absorbed her. She discovered that over 11,000 underage volunteers signed up in Nottinghamshire alone, all under 16 years old and many only 12 or 13. Telling their story became a passion and she regularity visits local schools to tell todays’ youngsters the story of those who went to war.

To mark the centenary of the WWI Armistice, and to commemorate the underage recruits who took part in the conflict from the Nottinghamshire area, Jo is staging an exhibition: Recruitment to Remembrance: The Story of Underage Boy Soldiers. The exhibition covers the work of Sir Arthur Markham; the stories of some of the young Nottinghamshire volunteers; and features Jo’s Yellow Ribbon of Remembrance, detailing all the local youngsters who died or went missing.

Jo says: ‘I am keen for as many people as possible to come and see the exhibition – young and old alike. This is such an emotional and poignant story so do be prepared to shed a tear’.

The exhibition is free and can be seen in the Four Seasons Shopping Centre in Mansfield from Monday 29th October to 11th November and will be open everyday between 10am – 4.30pm.

Have you got someone in your family who signed up when they were underage or have you been inspired to start to research the underage recruits in your area?

Write to us at our usual address.