Home / LIFESTYLE / REVIEWS > / THEATRE REVIEWS / The dialogue is snappy, fast and frequently fiery with humour throughout 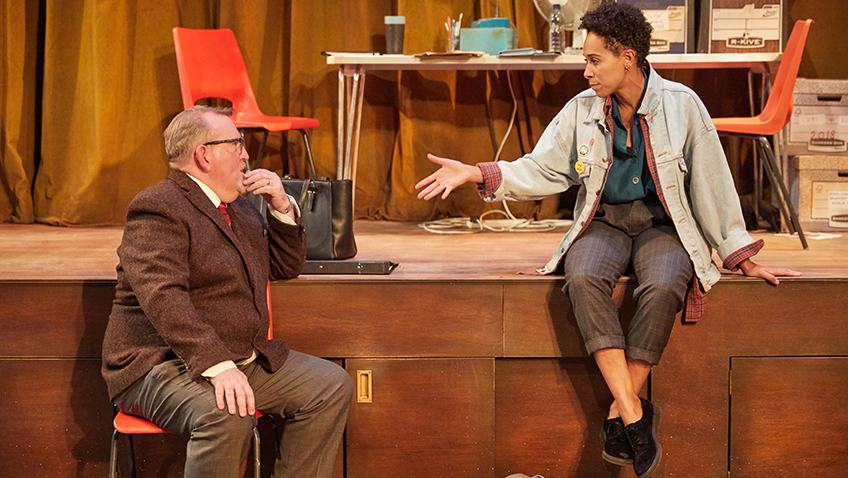 The dialogue is snappy, fast and frequently fiery with humour throughout

Two actors, a man and a woman, play four characters. One pair is involved in local council Labour party politics in 1988, the other in local metro mayor politicking in 2018. Throughout the two acts, scenes from each era alternate, providing direct parallels and contrasts in pace, mood, attitudes and relationships both personal and political, with the main focus on the role of the woman in politics, in particular the woman of colour.

This is the latest play from Chris Bush, born in the Steel City of Sheffield and writer, amongst other things, of 2007 success TONY! The Blair Musical. Things have certainly changed over the last thirty years. Society and politics have moved on and we’ve progressed. But what has that progress achieved? Are we, and are women, in a better place now or a worse one, or is it just the same? If you expect clear-cut conclusions, think on! As in politics, as in life, there are none. 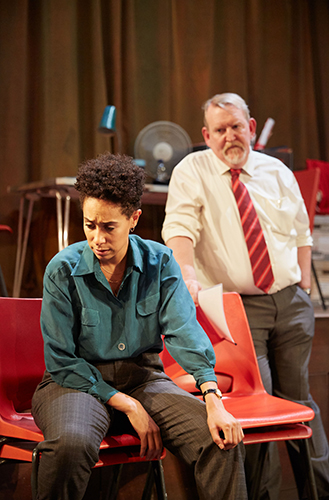 All praise to the two actors as they rapidly alternate their roles with slick rotations of props and personalities before a massive backdrop of school hall/community hall curtains and wooden platform, plastic chairs below, desk cluttered with old box files and lamps above. Nigel Betts transforms admirably from affable Welshman councillor Dai, gently encouraging self-effacing, diffident, naive young Josie Kirkwood to campaign for a seat on the council alongside him in the days when laid-back humour and cups of tea got everyone through the day, into shirt-clad, stalwart Yorkshireman Ian, assisting modern, forthright, career woman Vanessa Gallacher in winning a fraught, frenetic, confrontational bid to be metro mayor in a party full of infighting and backstabbing. Might both men, though, prove to be just manipulators for their own ends?

Rebecca Sproggs alternates 1988’s modest Yorkshire lass, Josie, an expert in steel who’s asked for advice only on child care while her expert knowledge is ripped off by a man and whose mother’s foremost aspiration for her is that get a boyfriend, with 2018’s pushy, determined career woman Vanessa. Locally born, she’s spent her latter years in the Latte-lands of Westminster in the alien regions of Down South and is now set on bringing progress Up North to the former Socialist Republic of South Yorkshire. Efficiency demands dying industries, like dying cats, be put out of their misery, regardless of collateral damage and, in a world in which public perception and image reign supreme, passionate beliefs that cling to past traditions are out.

In snapshot snatches, we glimpse comparisons of then and now: the pace of life changes from laid-back and leisurely to neurotic and abusive; we change from occasional newspaper items and idle gossip to non-stop scathing, frenetic updates on phones and tablets; women’s personal and political roles change from subservient to feisty. But personalities, like politics, are complex and contradictory and not always as they seem, and both scenarios have a twist in the tale (though not, perhaps, totally convincing). Might that heartless bitch actually have a heart? Might that warm, caring, father-figure be just a Harvey Weinstein wolf in Welsh sheep’s clothing? 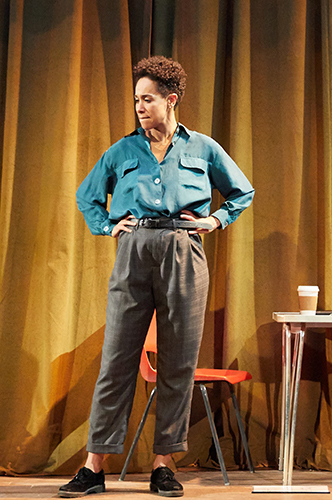 The dialogue is snappy, fast and frequently fiery with humour throughout, sometimes topical, sometimes contrived, sometimes based entirely on expletives. At times, especially towards the end, Steel feels too scrappy, perhaps, to rivet a full flow of fascinated focus. It says a lot and says it fast, but overload can lead to jumbled, confusing messages in places. Josie’s farcical re-enactment of a confused fusion of Julie Walters’ 1986 Two Soupssketch and Mrs Overall the tea-lady, using real soup (!) is way over-the-top even if Josie were to turn out to be pure fantasy. (What! Why? Where did that come from?) The steel references are perhaps a little overdone and the teabag analogy a bit strained (Eleanor Roosevelt’s fault entirely.) Why is a woman like a teabag? You find out how strong she is only when she’s in hot water. Of course, some teabags turn out to be wishy-washy weak, while some disintegrate altogether! So that one doesn’t quite hold water. But interesting and amusing things are said and shown, and the piece is beautifully acted.

Showing in Sheffield until Oct 6th