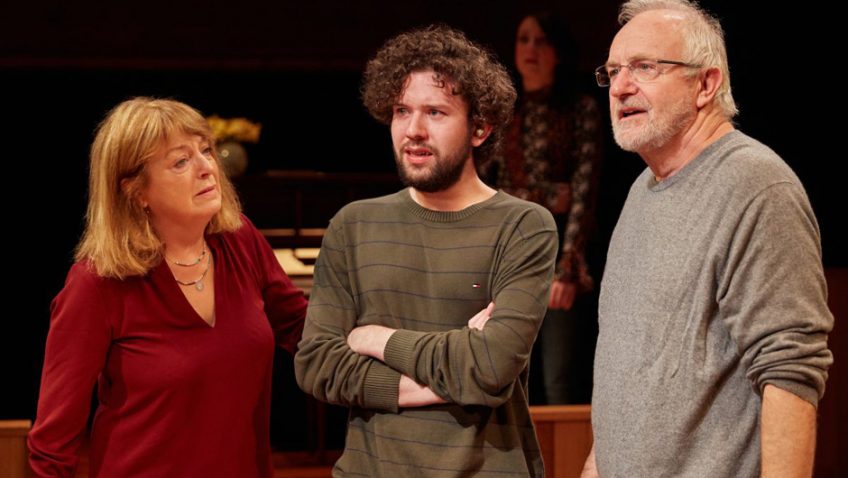 Raine’s lively play is dotted with engaging moments of humour, pain and pathos

Being born deaf into a hearing family, no matter how loving, can prove pretty isolating. It’s doubly so when family members are so caught up with their own problems, preoccupations and egos that they don’t ever properly consider the world from the standpoint of the deaf person or properly communicate and interact with him. In Nina Raine’s Tribes, premiered in 2010 and winner of an Outstanding Play award in 2012, it’s Billy, youngest of three grown-up siblings in a loud, quarrelsome family, who is deaf. (Played sympathetically by Ciaran Alexander-Stewart, unlike the rest, he’s inexplicably Scottish, too!) Around Billy, on the periphery of his semi-silent world, siblings Ruth and Dan and parents Beth and Christopher operate in a separate, chaotic, very wordy world, filled with constant joshing and abusive bickering. Presented with wit and humour, it’s laced, too, with heavy-handed doses of foul obscenities and bitterest bile. Playing dad Christopher, Simon Rouse is convincingly obnoxious in bulldozing everyone in sight with his loud, unmoveable, unreasonable opinions. In fact, he’s deafest of all, refusing to listen to anyone or ever consider the needs and viewpoints of others. Along with the rest of them, he demonstrates how intricacies of communication and relationships are difficult not just for the physically deaf but for all of us. Each with our own limitations, ambiguities, insecurities, blind-spots and deafnesses, we all live, to a greater or lesser extent, in isolated, self-centred worlds, not listening properly to others or putting ourselves in their shoes. Since relationships are forged through communication, the more muddled the communication, the more muddled the relationship. This family’s relationships are certainly muddled and all too destructive.

Billy’s sister Ruth (Louisa Connolly-Burnham), histrionic drama queen and would-be operatic diva, bickers vociferously with thesis-writing brother Dan, played with great sensitivity by Oliver Johnstone, as Dan’s mental health problems take him from bombastic, self-assured verbosity to shaking, jibbering wreck, unable, in the end, to communicate with words at all. Aspiring novelist wordsmith Mum (Lindy Whiteford) is the softest, most loving of them but still a feisty fighter in the constant arguing bouts.

Within this lively family ‘tribe’ Billy, loved by each, is largely excluded from the noisy goings-on, a good thing in some respects, but giving him no chance to fully establish his identity and express himself. Then he meets lovely, lively Sylvia (the expressive Emily Howlett), daughter of deaf parents, who is now struggling to come to terms with becoming deaf herself as an adult, her dilemma similar yet very different to Billy’s. Via Sylvia, Billy joins a new ‘tribe’, from which his family had previously ‘sheltered’ him – the deaf community, where he finds outlets for expressing himself at last, though not necessarily all to the good.

Dotted with engaging moments of humour, pain and pathos, Raine’s lively play demonstrates the human need to be part of a group or tribe, where a sense of belonging, identity and self-expression can flourish and where interests, values, empathy and understanding are shared. It deals, too, with the nature and limitations of communication through words, tone of voice, through sign language and bodily expression. Indeed, so many strands of thought are expressed throughout the play, so much is said and in so many words, it’s difficult to draw everything together in any lucid, logical, rounded way. As in Billy’s family, communication overload can be just as bewildering as lack of communication.

Tribes plays at the Sheffield Crucible Studio until July 22nd with some performances audio described, signed or captioned.