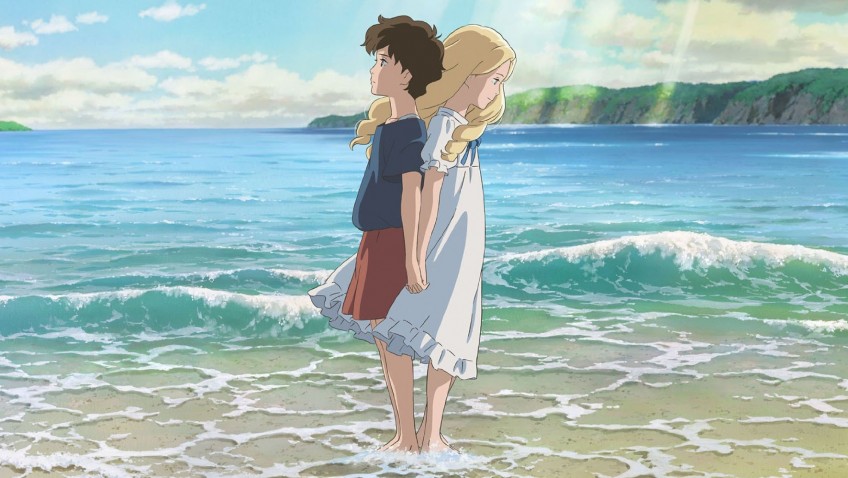 A qualified winner from the now closed Studio Ghibli

Hayao Miyazaki (The Wind Also Rises, Spirited Away) and Isao Takahata (The Tale of the Princess Kaguya, Grave of the Fireflies) have retired at the ages of 75 and 80 respectively, and the successful studio they founded, Studio Ghibli, has ‘temporarily’ closed.

The Studio’s last release is not by the two masters at all, but by a 42-year-old animator in the company, Hiromasa Yonebayashi, who worked his way up the ranks to director in 2010 with the delightful The Secret World of Arrietty.  Arrietty was based on The Borrowers by English author Mary Norton. For his second and maybe last feature under the Ghibli logo, Hiromasa Yonebayashi has again chosen to adapt a novel about childhood by a female British author: Joan G Robinson’s When Marnie was There.  His atmospheric adaptation is a sumptuous, dreamlike feast for the eyes, and the intriguing element of mystery masks, for the most part, the increasingly sentimentality. But the film is burdened with a plot-heavy, expository ending reminiscent of those found in Agatha Christie’s mysteries.

Yonebayashi changes the novel’s location from Norfolk to Sapporo in Japan, but the eponymous Marnie remains a blond-haired English rose (who is, and who speaks Japanese in the sub-titled version). Twelve-year-old Anna Sasaski lives in Sapporo with her foster parents and is an antisocial, unhappy girl. Unbeknown to her foster parents, the reason she remains distant from them is because she has learned that they are paid by the government to care for her.  She believes they would otherwise reject her and that they only care about the money.

When she collapses at school one day from asthma attack, her foster mother, Yoriko, sends Anna to spend the summer holidays with Yorkiko’s relatives, Setsu and Kiyomasa Oiwa. They live in a beautiful seaside town near Kushiro where the air is clear and the sea beckons.

Anna’s room is one to set us all dreaming.  On the side of a hill, it opens out on the sea as though you could dive from the window.  Anna immediately goes off exploring and is instantly drawn to a rundown and seemingly abandoned villa set in a cove in the salt marshes.

Anna wades over to the house increasingly convinced she has been there or seen the house before. Realising the tide has risen, Anna panics but is rowed back to shore by a mute old fisherman named Toichi. As she turns back for one final look, the villa, now lit up, seems to change. Her hosts tell her that the villa was once the holiday home of a foreign family, but is now vacant.  Intrigued, Anna has dreams of seeing a blond girl at the upstairs bay window, her hair being combed by an elderly woman.

When, upset by an argument about her curious blue eyes, Anna rows herself back to the house, she meets the blond girl whose name is Marnie. Marnie convinces the lonely Anna that Anna is not dreaming – that she is real.  Marnie invites Anna to a society party her socialite parents are throwing where Anna is disconcerted to watch Marnie dance with a handsome young man named Kazuhiko.

In the early hours of the morning the townsfolk find Anna lying outside near the road. Her indulgent, non-judgmental hosts take her in for breakfast, few questions asked. When Anna returns to the house, it is once again derelict with no lights on. The meetings between Marnie and Anna continue and eventually Marnie tells Anna that her parents frequently leave her alone with an abusive nanny and maids while they travelled.   They threatened to lock her overnight in the eerie silo and she remains petrified of it.  Anna leads Marnie there to overcome her fear, but Anna awakens alone in the silo, cold and wet.

There are two other female characters who play a key role in the story. Sayaka is a girl Anna’s age whose parents are renovating the derelict villa and who finds Marnie’s diary in the house, with a few pages missing.  Sayaka becomes Anna’s first friend and someone with whom she can share her discovery of Marnie.  The other character is a landscape painter named Hisako.

There is much to admire in this gorgeously animated, unusually dark coming-of-age film about memories, loss and childhood fantasies. The last quarter of the film, however, assumes that viewers will bring to the film the heightened emotion that Anna feels, but that is probably not going to be the case with everyone. Children will remain haunted by the interplay of dream and reality and certainly by the invisible friend motif and the haunted house. That works for adults, too, until the sentimentality and contrived nature of the plot (the first hint is Hisako’s comment) starts to encroach on that mood.  That the mystery is ‘explained’ in a surge of after-the-fact explanation instead of being hinted at visually or woven into the story through dialogue remains a problem in the adaptation.

Children might prefer the dubbed version.  While it is excellently dubbed by a great cast of voices, it is odd that almost all the actors are American, and not English as in the source novel.  Hailee Steinfeld (True Grit) is Anna.  Geena Davis (The Long Kiss Goodnight, Thelma and Louise) voices Anna’s foster mother while John C Reilly (The Aviator, Gangs of New York, Boogie Nights), voices Kiyomasa Oiwa.