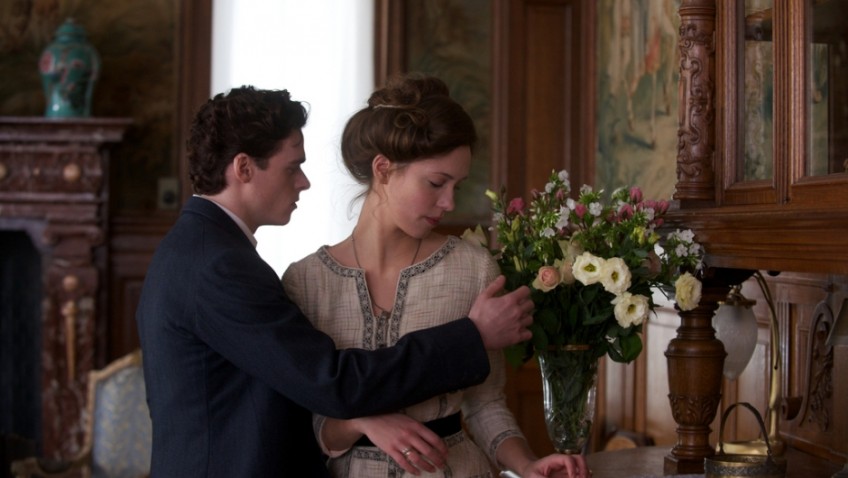 French filmmaker Patrice Leconte, now 66, burst on the international scene 25 years ago with the psychological thriller, Monsieur Hire. A remake of the 1947 film, Panique, Monsieur Hire is based on a novel by Georges Simenon and stars a creepy Michel Blanc as the eponymous voyeur.

Unsettling, ironic, perceptive and very French, Leconte, frequently writing his scripts with Jérôme Tonnerre, went on to endear himself to international art house audiences with films such as The Hairdresser’s Husband, the Girl on the Bridge, Ridicule, Intimate Strangers, and The Man on the Train.

It is perhaps inevitable that Leconte, like so many established European and Asian directors, would want to try his hand at an English language film to widen his audience and choice of actors. You cannot blame him for this ambition, but you can for his misguided choice of project. Combining his style with a meditative Austrian love story, an historic, pre-and post- WWI time frame; a German setting and British actors, Leconte, co-writing with Tonnerre, give us a pointless Euro-pudding too far.

Friedrich Zeitz (Richard Madden), a brilliant engineering graduate from a poor background, impresses Karl Hoffmeister (Alan Rickman), the demanding, aloof boss of a prominent family run German factory. When Hoffmeister, who is suffering from ill health, makes Zeitz plant manager, the promotion comes with a curious condition. Zeitz must move from the garret he shares with his devoted working class girlfriend, Anna (Shannon Tarbet), to his own spacious room at the Hoffmeister mansion.

While Zeitz is reluctant to abandon Anna and his independence, he is ambitious and hopelessly attracted to Hoffmeister’s beautiful, sophisticated, young wife Charlotte (Rebecca Hall). Zeitz tutors the couple’s son until he excels at school, listens with rapt attention as Charlotte plays the piano, and escorts her on leisure and cultural outings as though he is already Charlotte’s husband. The young couple fails to realise that their growing passion is being masterminded by Hoffmeister, controlling until the last.

Zeitz convinces Hoffmeister that the factory must lower the cost of its core component, manganese ore, and has a plan about how to do so. Zeitz’s solution, which finds favour with Hoffmeister’s bankers, is to purchase cheap land in Mexico to mine the ore which is in plentiful supply there. When Hoffmeister determines that Zeitz should oversee the operations for two years, he and Charlotte are distraught. They declare their love for one another and make a promise to be reunited come what may. They cannot foresee that World War I will separate them for nearly a decade.

It really does feel like nine long years, too. The slow, melodramatic pacing of the story’s development is matched only by the lull of the lovers’ separation during which Charlotte writes letters and occasionally reads them. It doesn’t help that the story is seeped in the German landscape and history while failing to integrate it into the story. Even Charlotte’s piano playing, which seems to hold some dark, symbolic secret, comes to nothing. The fact that all the characters are British does not help the film’s atmosphere or credibility as they feel oddly out of place in their own homes.

Hoffmeister remains an enigma; generously preparing the way for his young wife to remarry, yet jealously playing a game in which the young couple are never allowed to consummate their love. This might be a natural reaction, but we never understand him enough to know whether his plan has backfired, or if he is a tad sadistic.

The big scene in which Zeitz finally returns is underwhelming and awkward.You can’t help but think that Zweig’s novel, A Journey into the Past, had something meaningful to say about the nature of love, promises, and retrieving the past that the film fails to develop.

While Madden is handsome and Charlotte is very attractive, Hall, a head taller than Madden and bigger boned, overwhelms him. Zeitz always seems like Charlotte’s younger brother. Unintentionally or not, the real chemistry is between Zeitz and his impoverished girlfriend, for whom you might find yourself rooting. Some reassurance that Zeitz is providing for her financially might help us to care a little more about a less than sympathetic character.