Home / LIFESTYLE / MOTORING / Opposite ends of the spectrum 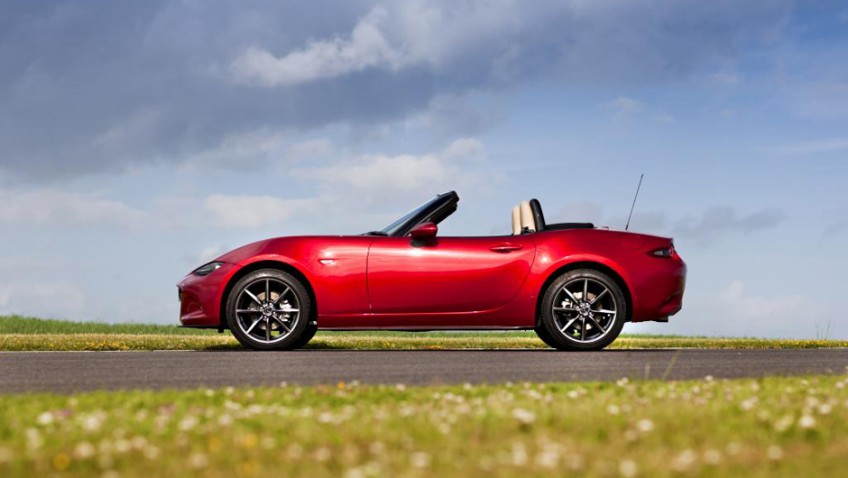 Opposite ends of the spectrum

Sports cars…..don’t you just love ’em. Well, if you’re British, statistics say you certainly do, for despite our weather the number of convertibles sold in the UK – expressed as a percentage of total car sales – exceeds virtually every other European country by a country mile. There are good reasons for this; the most important being the ease of folding the hood down and up in recent convertible cars. When it starts to rain you really don’t want to be standing outside the car fiddling with flapping canvas and press fasteners while the elements dampen your haute couture.

Thankfully these days you don’t have to, because the electric folding roofs employed by most manufacturers make the job just a matter of pressing a switch. The country’s – indeed the world’s – most popular sports car, Mazda’s MX-5, achieves this in just twelve seconds; at least it did until the new model came along, for which there is currently only a soft top which has to be folded by the driver. Having said which, provided you are reasonably supple it can be done one-handed without getting out of the car, and in rather less than twelve seconds. Bearing in mind the popularity of the folding hard tops I asked a Mazda spokesman when we’d be seeing one on the new model; a question which failed to elicit an answer, so it’s not going to be in the near future. Don’t rule it out altogether though.

The MX-5 is a small car in practical terms, which is to say that it suits men and women who travel light. Forget the hefty suitcases – they won’t fit. A couple of weekend bags, and no golf clubs, will fill the boot to capacity; actual volume is 130 litres (4.6 cubic feet), but it’s important to stress that this volume is independent of the hood position; unlike most convertibles you’re not limited to hood-up motoring in order to maximise the luggage space. The MX-5 has been with us for over a quarter of a century, and one of the fundamental reasons for its continued success is the rear-wheel drive configuration. When it was first launched Mazda were happy to admit they’d taken the best factors from traditional sports cars like the Triumph TR series and the Austin Healey, both of which I’d owned, and I’m sure many readers will have had one of them. What it meant was two seats and most importantly rear-wheel drive, which can give an experienced driver far more control than what was then the increasingly popular front-drive format. These days of course we’re blessed with Dynamic Stability Control which in almost all circumstances will prevent the car sliding out of line when cornering; keen drivers can however reduce the amount of assistance offered by DSC by pressing a switch, thereby leaving themselves in full charge of the car’s attitude. If that seems an unwise thing to be doing, it’s worth saying that for 90% of drivers – those who don’t wish to be fully sensitive to how the car will react in the next tenth of a second – it certainly is.

Two petrol engines are offered for the new MX-5: 1.5 and 2.0 litres. The larger engine, as you’d expect, offers better performance, though not perhaps sufficient an improvement to warrant a noticeably worse fuel figure – 40.9mpg compared to the 47.1 of the smaller engine.

It’s interesting to describe the plus points of a sports car, for the practicalities don’t actually get much of a look-in. What it comes down to is the driving experience; why else would you go for a car that doesn’t boast amazing fuel consumption, or great rear leg room, or the ability to transport children’s piles of luggage from university to first apartment. My guess is that even drivers who might doubt their ability to enjoy the experience would be surprised at what an MX-5 can do to change their thinking. There’s only one way to be sure, and if you feel even the slightest wish to treat yourself, why not give it a try. Talking about the alternatives of driving pleasure and motoring practicality, Mitsubishi would no doubt contend that their Plug-in Hybrid Electric Vehicle is the ultimate route to the latter. It’s certainly the opposite end of the spectrum to cars such as the MX-5.

The new model of Outlander PHEV has just been launched, with sales of the previous one having proved that the British public appreciates the point of combining electric and petrol engines to get the best of both worlds. The PHEV is the UK’s best selling plug-in hybrid, taking around half of all sales in the segment.

The electric system is necessarily a complex piece of design, but you can see what the computer is up to on the well designed info screen. As usual, when lifting off the throttle or braking, the motors reverse their thinking and charge the battery, so you use less braking and can feel the deceleration caused by that charging; you can adjust the fierceness of it yourself. If you do floor the throttle for a rapid overtaking manoeuvre, then the 2-litre petrol engine will cut in imperceptibly and you’ll have electric and internal combustion motors working to speed your progress. This ‘Parallel Hybrid’ mode sets the Outlander apart from cars such as the Vauxhall Ampera and Chevrolet Volt (no longer available) which merely use their small 1.4 petrol engine to charge the batteries; this system is known as ‘Series Hybrid’. With the Outlander’s two electric motors driving the front and rear wheels, and the petrol engine also giving its effort to the front, the PHEV is a genuine 4WD ‘Sports Utility Vehicle’ that will prove perfectly capable off road. The range on electric power alone is quoted by Mitsubishi as 32 miles. In my experience that’s a tad optimistic, even when you’re trying to maximise the mileage. We tested the car around the roads of Bristol, and regular visitors to that city will know the traffic here is a severe test for any sort of fuel economy. The 18-mile route eventually saw the battery charge reduced to below one-quarter, so there weren’t many miles left. We’d mostly driven pretty steadily, though one rapid overtaking manoeuvre caused the petrol engine to cut in and lend a hand. Apart from that the journey as far as we could tell was exclusively by electric power. Our average fuel consumption was therefore impressive; to be precise, according to the computer it was 941mpg. Anyone completing the journey without using the petrol engine at all would of course have had an infinite mpg, though that’s a near impossibility. The highest figure achieved by any of the 26 testers was 2,825mpg. Naturally, after the battery has given its all, you either recharge it or use petrol, subsequently getting economy that’s the norm for a fairly heavy (1,845kg) family car. The official emissions figure is 42g/km (slightly lower than the previous model), which means that freedom from road tax and congestion charge are assured for quite a few years to come.

A full recharge at home, on night-time tariffs, will likely cost little more than £1. There are also a growing number of ‘fast-charging stations’ at service areas and in-town car parks which will give an 80% charge in just 30 minutes. Such is the government’s apparent desire to see greater take-up of battery powered cars that these fast-charge stations in some cases offer that charge for free. You can get full details of this on a very useful site: www.chargemap.com.

Battery weight does have some effect on the Outlander’s performance and ride, but stored where they are – flat below the rear seat – the centre of gravity is lower than with other models, so handling feels solid and secure. It’s no sports car, but the 0-62 time of 11 seconds isn’t slow, and the instant max torque from the electric motors gives an impressive boost from stationary.

The list of improvements over the previous model is a long one – the body is 40mm longer for a start, and incorporates the new ‘Dynamic Shield’ styling which will be common to other Mitsubishis in the future; slim wraparound LED headlamps with LED day running lights play a strong part here. Major improvements have also been made to interior noise levels, and the ride now is certainly quietly refined.

New diesel engined versions of the Outlander are also being launched, but the big story is the PHEV. As long as the government keeps up its £5,000 grant for buyers it’s going to look like a very reasonable buy. I like it a lot, and there are worthwhile improvements on the new model. My only slight reservation is the electric range which isn’t massive. But if your normal daily usage is less than 30 miles you could in theory avoid petrol pumps altogether, and there are those that have!