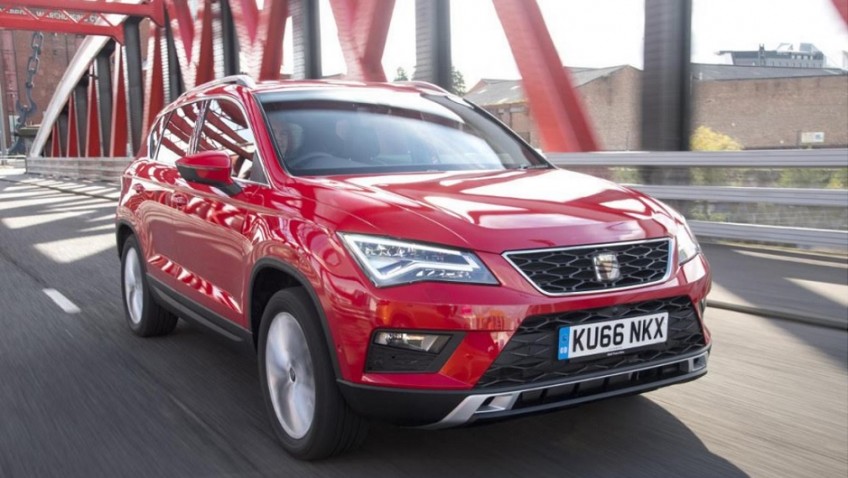 The Spanish manufacturer SEAT has been with us a long time, and in the years 2008-2014 British buyers showed their appreciation by raising the UK market share from 1.4% up to almost 2.2%, which is the equal of Honda and equates to over 50,000 cars per annum. SEAT is a member of the Volkswagen group, and the public perception of it within the group is at the ‘performance’ end of things: more exciting than Škoda, and less expensive than Audi.

The Seat Ateca, named after the municipality in Zaragoza, is a small Sports Utility Vehicle which effectively replaces the Altea – similar in name and slightly similar in size/shape – which SEAT had been producing since 2004. The SUV niche has grown vastly and rapidly in the last few years; regular readers will have seen more than a few of them in Mature Times. Part of the fascination for SUVs is found in the high set driving position, which appeals to those who want the best possible view ahead and to the sides, and should you be inclined to go off-road from time to time, the extra ground clearance of an SUV will make life easier for its underside.

Talking of going off-road, the ultimate capability here is reserved for 4-wheel-drive vehicles, and with the Ateca you have the choice of 2- or 4WD. However, the 4WD models (there are just two) are at the top of the spec list, and pricing for these starts at £27,425. Engine choice across the range consists of two petrol (1.0 and 1.4 litres) and three diesel – 1.6 and 2-litres, the latter with either 150 or 190PS. Bearing in mind that this is a medium sized car (about the size of a Ford Focus) you might think that the 1-litre petrol engine would be lacking power when push came to shove, but as with all the new three-cylinder 1-litre engines – and many manufacturers now have one – there’s a surprising amount of shove available. Having said which, my favourite of the petrol engines was the 1.4, which feels more like a 1.8 and has official fuel consumption within 1mpg of the 1-litre, a clear illustration of the fact that there’s a limit to how small one should go with capacity for a given car.

Interestingly, SEAT themselves expect UK buyers to be equally split between petrol and diesel.
SEAT has always aimed high with their technology, and the Ateca has a good range of electronic equipment. It extends from full LED headlights through a broad portfolio of assistance systems, including Traffic Jam Assist and Emergency Assist, to a package of ‘infotainment systems’ with 8” touch-screens and what they call ‘Full Link Connectivity’. This carries the operating systems for smartphones, so as SEAT put it: “This means that SEAT drivers are always connected whatever smartphone they use and able to retain their full concentration on the road, with secure access to the enabled functions via the touch-screen”.

Clever stuff, but I know there will be many readers who feel that SEAT drivers could possibly manage without their phones until they get where they’re going. The gadgetry does also make its presence felt in safety areas. For instance with Blind Spot Detection which will particularly help when lane changing; two radar sensors monitor traffic behind the Ateca on both sides, and a visual signal in the exterior mirror warns of vehicles approaching in the blind spot. In terms of everyday practicality the Ateca scores well. There’s ample room for long legs in both front and rear seats, and head room too is plentiful enough for lanky teenage children or grandchildren in the rear. Boot space – 510 litres before folding the rear seats – is pretty generous, though it is slightly reduced for 4WD models. Folding those rear seats is very easy, but as with almost all cars these days, only the seat backs fold, not the cushions, so you’re left with a sloping floor.

The Ateca is well built and has a quality feel to the interior. It’s not cheap, but more than matches its competitors – Nissan Qashqai, Kia Sportage, Renault Kadjar etc.. If you’re after an SUV, be sure to give this one a test.