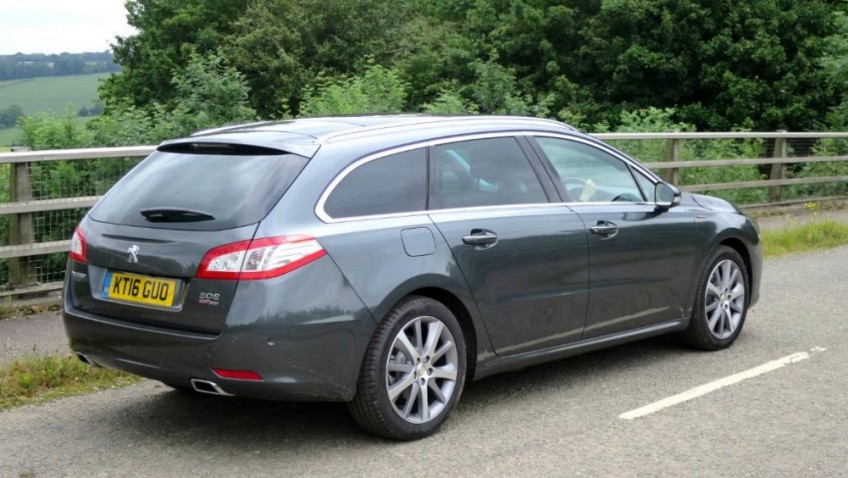 Most of the reviews I’ve written for Mature Times concern new cars, because those are models with which by definition most readers will not be familiar. However, every so often I do test cars that are not in their first flush of youth, but which after lengthy testing I’ve come to realise are not only easy to live with, but represent good value for money. Such a car is the Peugeot 508 SW.
Launched about five years ago, the 508 SW is a big car. With an Imperial length of 15’10” and its estate car design, it offers enough space for a big family, their luggage, and shopping too. I’ve been driving it for over three months, and certainly never failed to get everything we needed into the boot. Power for our model is a 2-litre diesel, and my long term fuel consumption has been 50.3mpg, which is remarkable for a car of this size. Although we’ve done a few long journeys, that consumption has been composed mostly of short trips, so is a realistic figure. Incidentally, the mpg was calculated from actual ‘fuel in’ figures, measured on the brim to brim method.

Amazingly this agrees exactly with the trip computer, and for me this is very much a ‘first’; tripcomputers are nearly always somewhat optimistic. I should say here that although Peugeot offer other diesel engines and indeed a hybrid version of the 508, there are currently no petrol engines available.

We’ve recently taken the car to France for a couple of days, and since I was testing the car I thought I’d test a new means of getting there. Our preference is for the ferry, rather than tunnel which for me doesn’t offer a particularly enjoyable experience, whereas a boat provides holiday atmosphere. For the short crossing the choice is P&O or DFDS, and for a change I opted for the Danish DFDS line. Pricing for this is similar to P&O, though both companies offer special deals which if they suit you can considerably lower the price.

Our tickets were priced at £70 for the return journey between Dover and Calais, though we did increase that marginally by opting for the DFDS Premium Lounge, which offers cakes, fresh fruit, petit fours and copious other goodies (even a glass of Prosecco if you’re inclined), all in a very smart lounge. The crossing, which took around 90 minutes, was totally serene, partly because the sea resembled the proverbial millpond. But even in heavier weather today’s big ferries make light work of the channel. Although the tunnel is slightly quicker, it’s usually more expensive.

It stands to reason that anyone buying an estate car will be doing so for its luggage capabilities.The 508 is a fairly large car, so even in saloon format it’s not short of boot space. Our SW version – which Peugeot for some arcane reason refuse to call Station Wagon, or indeed ‘estate’ – has official capacity figures of 660/1,865 litres, with the rear seat backs up and down respectively. This does assume the thing is packed to the roof, and if you’re still Imperially inclined that’s a maximum of 65 cubic feet, which is huge. Loading the boot over a flat sill that’s almost at boot floor level is an easy job, and the parcel shelf is likewise well designed. This is a spring-loaded unit which slots neatly into the side recesses just aft of the rear seats, after which the flexible cover can be pulled out or retracted back in with a pleasing solidity thanks to the side channels in which it runs. The whole thing feels well made and built to last.

The 508 is for the most part an easy car to drive, but I have an issue with the visibility; it’s fine to the front, but right turns at a T-junction can be very tricky. The problem is caused partly by deep head restraints, but mostly by the thick B-pillars, which are a mighty 21cm wide. A lot of care and head movement are required to filter into the traffic. Other than that it’s really easy to drive, and although a large car, all but the base model are fitted not only with parking sensors front and rear but also a reversing camera.

If you have the need for this much space in your car, then the 508 SW is well worth a look. The electronics really do aid the parking process, and build quality, ride comfort and fuel consumption are such that it’s a pleasure to be on board.