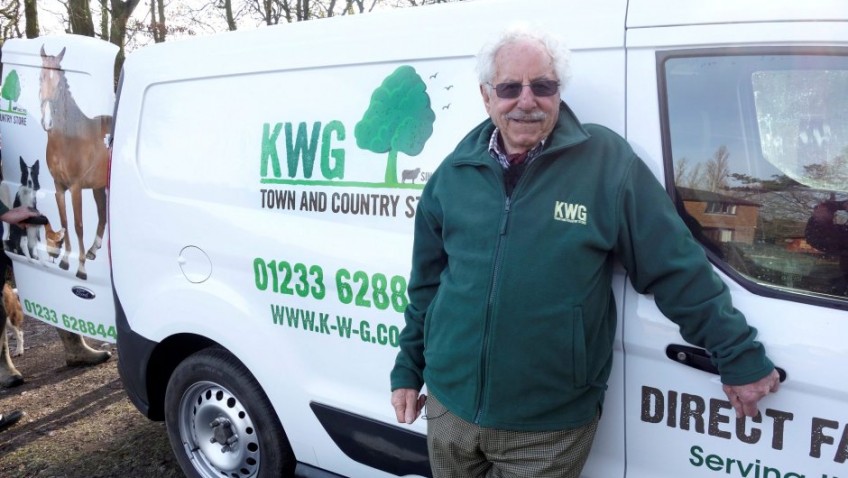 The grandfather-of-two has spent nearly eight DECADES in full-time employment but says he has no plans of retiring.

He has owned his own pharmaceutical company, worked as a labourer on farmland and had a stint in the British Army.

For the past three years Reginald has been travelling around Kent selling farm clothing and accessories for Kent Wool Growers.

He gets up at six, works nine til five, five days a week and says he would not be alive today if it wasn’t for his work.

Reginald, from Stelling Minnis, Kent, said: “I hate the thought of sitting at home because people deteriorate.

“It is like having a car, if you leave it in the garage and you don’t use it then there is a problem. The body I think is the same.”

He added: “It takes me a month to get around to every customer.

“They get excited when they see me because they know I give them the best value going.”

Reginald was born and raised into a farming family in Harrietsham, Kent, where his grandparents were farmers and butchers.

He spent seven years in the army after joining at 22 before starting his first job in 1947 working for Dalcinex Chemicals.

The grandfather went on to work for various companies and became area manager at local company Cooper McDougall & Robertson.

He then set up R K Huntley Vet Pharmaceuticals which successfully ran for over 40 years selling medical and agricultural products to the farming community.

Now the farm sales ambassador looks after 300 customers for KWG and racks up 250 miles a week driving around to see clients.

Asked what his secret was, Reginald said: “I mustn’t publicise that too much. I don’t want people to catch on to the idea.”

He keeps fit and healthy by working, regularly exercising and making sure he gets eight hours sleep every night.

For the past 50 years he has attended the gym once a week and said nutrition is key with “meat and two veg” on the menu.

Peter Holmes, managing director of the company, said: “He is a great asset to the company and a role model for society, we’re very proud of his achievements .

“We can all take a valuable lesson from Reg’s passion for life and business.”

Reginald celebrated his 96th birthday on Friday and celebrated with mulled wine and mince pies.

The golf fanatic, who once had a handicap of 4, lives with his wife Patricia, a farmer’s daughter, and has two children and two grandsons.