Home / LIFESTYLE / Not for the chopping block 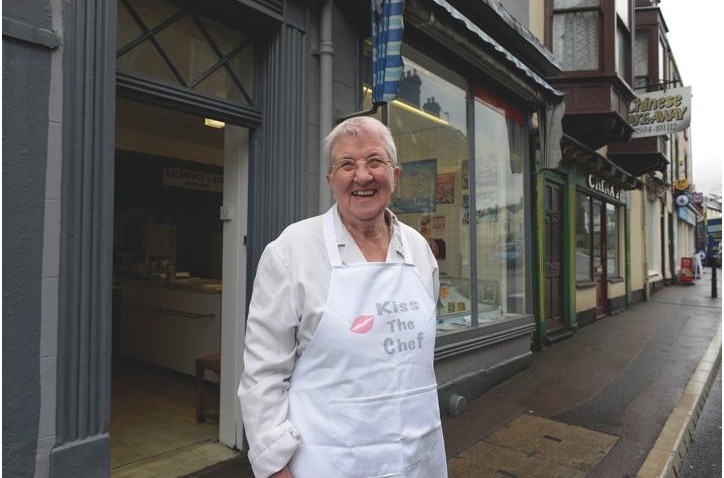 Not for the chopping block

‘Meat’ Marian Voyce – Britain’s oldest female butcher who refuses to give up the job despite being aged 83.

The sprightly butcher joined her husband Lionel’s family meat business in 1959 when the pair married, and helped move out of the market hall to the shop it in which it stands today.

Lionel taught her all he knew about cuts and running a business, and since his death in 2000 she has single-handedly been at the helm of the well-used butcher’s block.

Marian still has chairs in the shop so locals can sit down for a chat, and only uses a pencil and paper to tot up customers’ bills.

But the community stalwart has no intention of retiring any time soon because she’d miss the chit-chat of the shop, FC Voyce and Son, in Coleford, Gloucestershire.

Pleased to meet you

Smiley Marian said: “I like meeting people and chatting. You’ve got to keep going, haven’t you?

“It will depend on my health. Anyway, if I retired, what would I do?” FC Voyce was set up by Marian’s father-in-law Frederick Charles in the 1930s, when he set up a stall in the old market hall.

He travelled every day from his home in Cinderford on his pony and trap for the daily market.

“There wasn’t refrigeration then, so any meat not sold at the end of the day, Lionel’s dad would take to the miners at places like New Fancy pit and sell it to them,” said Marion.

When the market hall was pulled down in 1968, Marian found their new premises where they remain today.

She said: “I worked with my husband Lionel, who was still here part-time when he was 80, but I have been completely on my own since he died 15 years ago.

“In all our working life we rarely had a holiday because of the business.

“When we did, we used to close on Saturday afternoon then drive down to Bournemouth and be back by Monday.

“Lionel showed me all the cuts, how to cut to the bone. I didn’t like touching liver though. I used to pull a face when I was handling liver.

“Customers would have their meat wrapped in greaseproof paper and would expect to get several days of meals from one joint.

“They wanted the best meat and it was the men’s job to buy the Sunday joint.

“People used to buy a Sunday roast and would make it last for a week – Monday bubble and squeak, Tuesday cold meats, Wednesday meat or stew and
so on.”