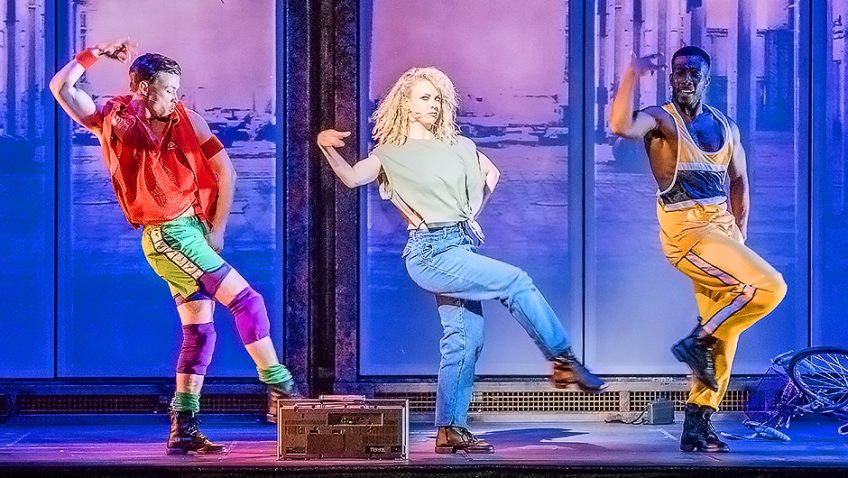 Mature Times reviews Flashdance – The Musical at The Bristol Hippodrome

A colourful array of neon Lycra, legwarmers, sweat bands and retro running shorts took the stage by storm as Flashdance the Musical arrived at The Bristol Hippodrome this week.

Set in 1980s Pittsburgh, Flashdance the Musical follows feisty Alex Owens, a strong-willed and independent young woman who works as an apprentice welder by day and a nightclub dancer by night. Alex aspires to get in to the prestigious dance school, Shipley Academy, but as a working class girl with no formal training, knows the odds are against her.

As Alex pursues her dream, the story unravels her relationship with her boss and rich-kid, Nick Hurley, who wrestles with his conscience when it comes to making staff cuts at his family’s steelworks.

Alongside them, other talented cast members portrayed supporting characters with gusto. Colin Kiyani as Jimmy, Emily Kenwright (understudy) as Gloria, Carol Ball as Hannah and Rhodri Watkins as Andy, all stood out.

The music, by Robbie Roth (with Lyrics by Robbie Roth and Robert Cary) is high-spirited and delivered with energy and clarity by both the cast and the band, led by George Carter. With few tunes that you won’t recognise, the familiar, lively soundtrack of classic songs, including, “What a feeling”, “I love Rock & Roll” and “She’s a maniac” will certainly have you smiling, if not swaying in your seat. With that and the eclectic assortment of colourful costumes, Flashdance plunges its audience right back to the awesome eighties!

Both the set and the lighting worked well to portray the contrast between the industrial steelworks, the bright lights of Harry’s Club and the darker side of rival club, Chameleon, while the clever use of simple stairs to depict a variety of scenes enabled set changes to happen seamlessly.

There’s no doubt that last night’s show was a spectacle of fast moves, flashing lights and fantastic tunes, but there was perhaps a sense that it was lacking the polish and precision to really wow in the way it could have.

However, overall, the cast gave an energetic and entertaining performance. Highlights included the spectacular, iconic scene at the end of the first half and as the show drew to a close, an energy-filled, celebratory finale left the audience joyful and uplifted and, in many cases, on their feet, singing, dancing and clapping the night away!