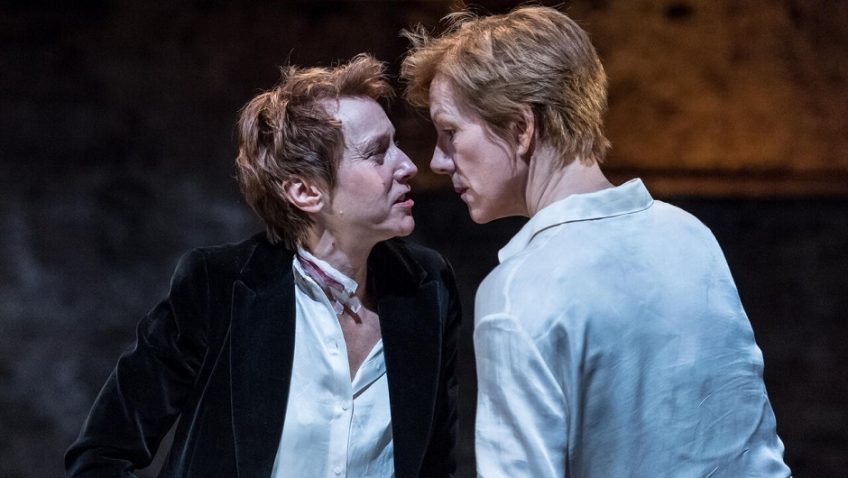 Friedrich Schiller wrote this first class political thriller in 1800. Robert Icke’s modern dress production, acted out on a circular revolving stage, is very modern in its language and urgency. The drama is totally gripping. It doesn’t matter who you see. The actresses, initially dressed in velvet suits and white shirts and mirror images of each other, are equally impressive in both roles, emphasising the similarities rather than the differences, two sides of the same coin, one Catholic, the other Protestant.

Elizabeth imprisoned Mary for 19 years fearing that Catholics would put her on the throne. She knows Mary will have to be executed; but she wavers, fearing the repercussions.

The most famous scene, a dramatic face to face confrontation, is fiction invented by Schiller. The Earl of Leicester engineers the meeting feeling certain that Elizabeth will be moved to pity and will pardon Mary.

Mary, goaded into insulting Elizabeth loses her temper and the two end up fighting like schoolgirls in a playground and have to be separated by the courtiers.

There are strong performances throughout. Vincent Franklin is Burleigh, a dangerous bully. John Light is Leicester in love with both queens and quick to ditch Mortimer to save his own skin.

Rudi Dharmalingham is Mortimer, a fictional Catholic activist. Sude Rimi is his uncle, a decent, honourable man. Alan Williams is Talbot, the wise elderly statesman whom Elizabeth should heed.

David Jonsson, cast as Elizabeth’s private secretary, has a memorable scene, which is fact not fiction. Elizabeth hands him a warrant for Mary’s execution and is deliberately ambiguous about whether he should keep it or deliver it immediately. He knows that whatever he does, his neck will be on the block.

Icke’s production ends with a theatrical flourish with Elizabeth in full Gloriana costume and make-up: red-wigged, whitened-face, body in a pannier, a royal waxwork.

Schiller’s Mary Stuart is one of the great historical dramas and this version is strongly recommended.