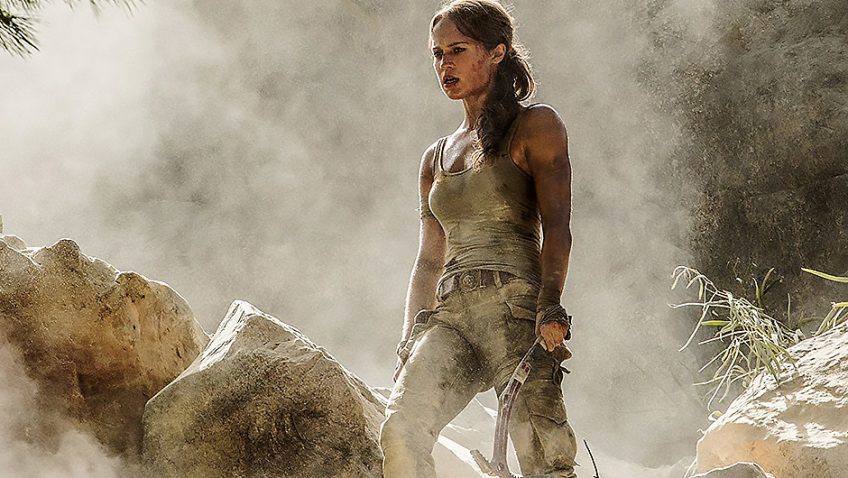 At the end of Tomb Raider

– a reboot of the video game-inspired, 17-year-old film series that began with Lara Croft: Tomb Raider – Lara, now played by Alicia Vikander (The Danish Girl), picks up two pistols and suggests they will come in handy (in the intended sequel). This scene is a nod to the ending of Lara Croft: Tomb Raider that starred a more physically credible and fun Angelina Jolie. But in the 2001 movie, it’s Lara’s butler Hillary who hands her the pistols on a pure silver tray. Modern Lara spends the first quarter of Tomb Raider

pleading poverty and even stealing an apple from her personal trainer. She works as a delivery cyclist in London, terrorising pedestrians and drivers alike as she races across the lanes and pavements around St Paul’s and Paternoster Square to win £600 as the fox in a cyclists’ fox hunt game. Distracted by a pedestrian who reminds her of her father, she crashes into a police car (without a scratch) and is bailed out by her guardian: her father’s trusted business partner Ana, (Kristin Scott Thomas).

As we learn in flash backs, Lara is a poor-little-rich-girl whose fabulous wealthy widower father, Sir Richard Croft (Dominic West) left her on the family estate during archery practice to embark on a research mission and never returned. He is presumed dead and Ana has been pressuring Lara – in denial over her father’s death – to take control of her father’s money and business as he intended.

In the company lawyer’s office, on the verge of signing the transfer of power, Lara fiddles around with one of her father’s puzzles and discovers a note and a key. If you’ve seen the original Lara Croft: Tomb Raider, The Da Vinci Code and Raiders of the Lost Ark, there’s no point in sticking around. It’s far-fetched enough to imagine that Sir Richard would foresee his daughter finding the key, but what follows is Dan Brown silly. The key leads her to a secret office in the stately home where a ‘if you are watching this I am dead’ video tells Lara that her dad was more than just a boring business man. Just how Sir Richard got all the clues, maps and objects (including a photo of a boat, The Endurance) to the hidden room if he’s been on the remote island of Yamatai for ten years is a puzzle you need to be Lara Croft to figure out.

Sir Richard explains to his daughter that he has been researching the first queen of Japan, Himiko, who, the legend goes, ruled her empire through dark magic until one day her own generals had enough of her tyranny. They dragged her to the remote Devil’s Sea and left her buried under a mountain on Yamatai island. Sir Richard travelled to Hong Kong and found one sucker poor enough to shuttle him over to the island. There, Sir Richard had to contend with his partner-turned-maniac, Mathias Vogel (Walton Goggins). The exploration mission was funded by a shadowy organisation called The Trinity (not to be confused with the Holy Trinity of The Da Vinci Code) – a nasty organisation that is destined to reappear in the sequel. 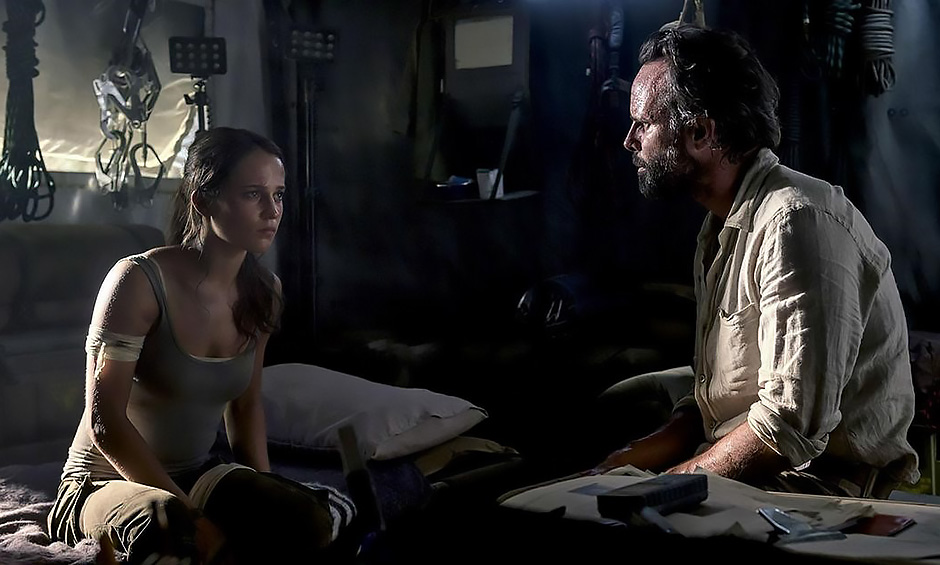 It seems that Sir Richard, humanitarian that he is, had a fatal difference of opinion with Vogel about the sanity of opening the burial chamber door and releasing Himiko’s deadly spell like a Pandora’s Box. Vogel, a bit like Colonel Strickland in The Shape of Water cannot go home to his family until he has the creature – rather, the sarcophagus – in his possession and out of commission. You really couldn’t make it up: but story creators Evan Daugherty (Snow White and the Huntsman) and Geneva Robertson-Dworet did.

It’s worth pointing out that the cycling race; a previous scene in which Lara, with her perfect sun-bed tan, is getting a pounding in a gym’s kickboxing ring, and flashbacks of teenage Lara at archery practice serve a function beyond exhibiting 29-year-old Alicia’s perfectly toned gamine body. We have to believe that when she survives a ship wreck, leads an island revolt; jumps across crumbling caves inside Queen Himiko’s burial chamber and goes head-to-head with Vogel on a ladder across a ravine, she has had solid training to make it plausible.

from the 2001 version. He is going for realism and playing it straight, with none of the original’s welcome humour. This search for realism is no doubt responsible for the race of the reckless cyclists, a familiar sight in London that clearly had an impact on the Norwegian director.

Ironically, while Uthaug is going for realism, the action sequences on Yamatai are so indebted to CGI that it wouldn’t matter whether Lara was a Navy Seal or had just arisen from the sofa after watching a box-set of Game of Thrones.

In her father’s video handy for expository information, he warns her to burn all his papers about Himiko so they can’t fall into the wrong hands. Ignoring this and stuffing the papers in her rucksack, Lara heads for Hong Kong where, by some miracle, she spots the very boat her father had taken to Yamatai – The Endurance. 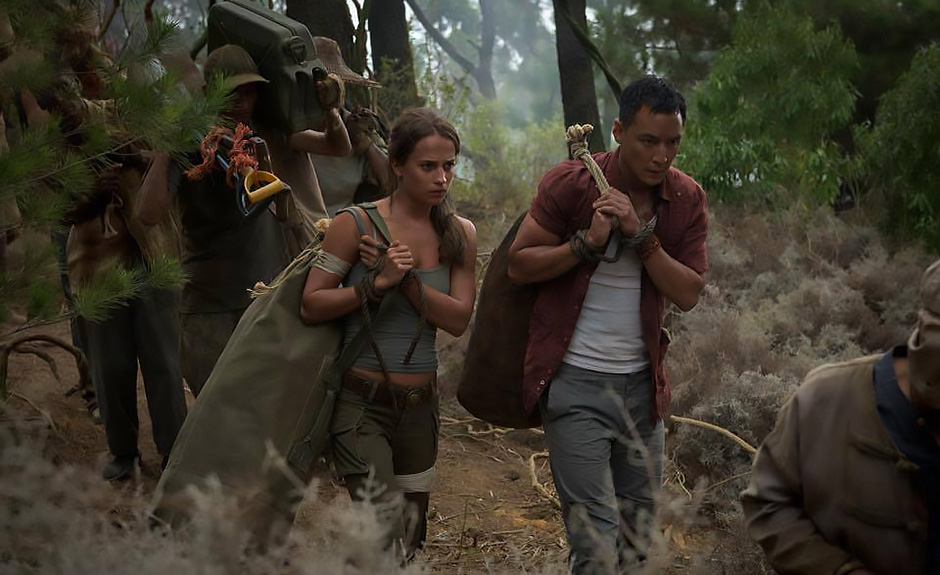 She also spots the boat’s sexy (single) captain, Lu Ren (Daniel Wu), whom Lara finds in a drunken stupor. Perhaps he’s been mourning his own father all these years, but he, too is about to be bribed into going to Yamatai, just like the father before him. Clearly scriptwriters Geneva Robertson-Dworet and Alastair Siddons haven’t realised that China is the superpower now. In any event, it’s the battle of the biceps as the two good looking orphans in revealing T-shirts, set out together on the Endurance.

Endurance is what you will need to get through the ‘perilous adventure’ that ensues on Yamatai. Lara has five obvious and easy opportunities of killing the evil Vogel, but, misses them all in what can only be an attempt to extend her time on screen. Given the film’s title, it is ironic that neither Lara nor her father are tomb raiders. Lara only agrees to enter the tomb under duress after failing to kill Vogel.

It is somewhat depressing to watch The Endurance crash into the rocky coast of Yamatai during a violent storm and remember Uthaug’s film The Wave made just two years ago. One of the best disaster movies of the decade, his thriller was made for a tiny fraction of the budget of Tomb Raider, but is so real and suspenseful that you need a stiff drink after leaving the cinema.

might be the story of a woman lured to a treacherous island in the hope of rescuing her beloved father. But it is the equally familiar tale of a talented foreign director lured to the treacherous shores of Los Angeles to direct by numbers.