Home / LIFESTYLE / REVIEWS > / FILM REVIEWS / A Mary Magdalene for our times, if not for Times Up 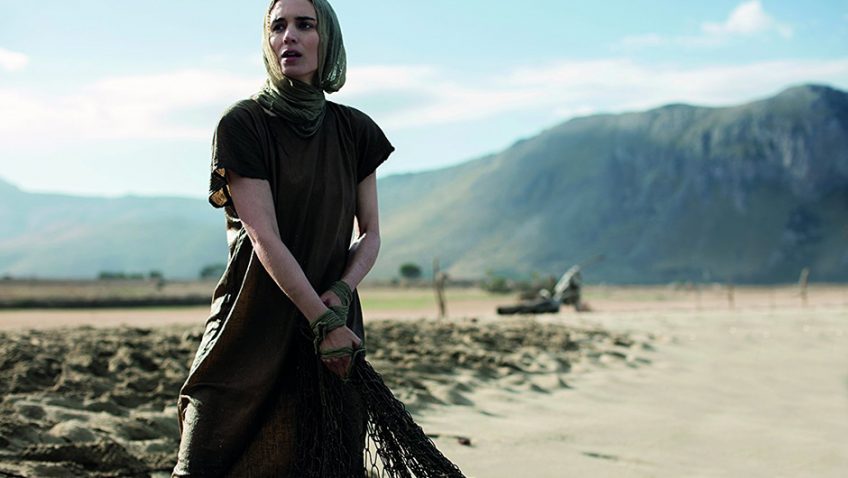 A Mary Magdalene for our times, if not for Times Up

One of my favourite paintings is in the St Mary Magdalene Chapel of Chichester Cathedral, a chapel that is stark and austere, but for Graham Sutherland’s painting, Noli Me Tangere. Painted in the bright colours of the South of France where Sutherland was living in 1960, it describes the moment in Chapter 20 of St John’s Gospel, when Mary Magdalene asks a gardener outside Jesus’ empty tomb where the body is. When the gardener speaks, Mary instantly recognises Jesus’ voice and reaches out to him. ‘Don’t touch me,’ he tells her, pulling away. ‘I have not yet gone up to the Father’.

Though very much a painting of its time, the heartbreaking moment it depicts is relived by anyone who gazes upon it. You cannot but be moved by its portrayal of a spiritual and physical limbo, bewildering for both friends whose relationship has suddenly changed beyond human comprehension. Little is known about the Jewish woman in the Old Testament known as The Magdalene, but both John and Mark (16:9) specifically name Mary as the first person to see Jesus after his resurrection and it is one of the most painted scenes in art history (Sutherland borrowed the idea of straw gardener’s cap from Rembrandt).

? Nothing, and that’s the problem. The most authenticated and dramatic scene in Mary’s (Rooney Mara) life is not in the movie. And it really needs to be.

is, like Sutherland’s painting, of its time. It may be aimed at the American Bible Belt, but Davis, and the film’s two female writers are also targeting a young, female audience, right down to the almost tangible fabrics on Jacqueline Durran’s meticulously designed costumes. In a particularly heavy-handed scene at the end, a defiant Mary tells the condescending Apostles, ‘the world will only change if we change.’ When they give a male slant to Jesus’ teaching, she snaps, ‘your message, not His.’ Her departing words are also full of feminist defiance: ‘you are all my brothers and I thank you, but I shall not stay and be silent.’ And when we next see her – leading a procession of women through the streets – you can almost make out a #MeToo emblazoned on their white robes.

TV and theatre writer Helen Edmundson (in her feature film debut) and scriptwriter Philippa Goslet – who wrote the dire screenplays for the Lorca/Dali biopic Ashes and the even more forgettable, How to Talk to Girls at Parties –sensibly opt for a minimalist script, where long, meaningful pauses are more important than conversation, usually carried out in soft voices. But with this murmuring, the endless scenes of the faithful walking along the coast to Jerusalem, a well-known plot and the film’s low-key, sanctimonious tone, we have to resist being lulled into the sleep of the innocent.

As for Joaquin Phoenix, it is tempting to compare his Jesus to Joe in You Were Never Really Here, but space does not permit it. Suffice it to say, Phoenix looks as though he wishes he was never really here either. It’s not only that he is the wrong size and age (Phoenix looks his 43 years and Christ as 30 or 33 at the time) for the role, but Phoenix snarls and yells in a brutish manner whereas Jesus, you imagine, would have commanded softly with his charisma. While Phoenix is a charismatic actor, when he preaches to the crowds he is about as convincing and compassionate as a half smoked cigar. His is an interpretation of Jesus as a new age alternative medicine man camping in the wild with his band of brothers (and Mary) and gaining converts more for what he does (cure the ill in an age when doctors only made things worse) than for what he says.

Davis worked with Australian cinematographer Greig Fraser (Bright Star, Zero Dark Thirty) before in Lion, and here Fraser’s ethereal, spiritual camera work is atmospheric enough to convince us we are in Judaea, circa AD 30. If anyone can do justice to the gorgeous scenery of Matera, Puglia Trapani in Sicily, while passing it off as the Holy Land, it is Fraser.

Davis also worked with Mara before in Lion where she was given a pointless role and was miscast. He owed her one and this is Mara’s film. When we first see her, Mary is a midwife delivering a baby from a very young girl too frightened to breathe. But Mary is always sneaking off to the temple and praying by herself, which embarrasses her family because such passion is unladylike. In one fireside conversation the tribe discuss St John the Baptist and someone warns, ‘we don’t live in a good age Baptists or prophets.’ Mary is not convinced. In arguably the film’s most dramatic scene, she is pulled out of bed and wrestled down in a rough sea by the rabbi in an exorcism that is contrasted with a steady stream of baptisms to come.

Mary worries her family for another reason. Well past the marriage age, she refuses to marry and shows no interest in having babies herself. When she hears gender-neutral Jesus of Nazereth speak of peace and love in God’s Kingdom, she instinctively feels a connection. When Jesus asks her if she has the courage to follow what she hears, she’s off in a flash, defying convention. In the middle ages it was common to regard Mary, the sole woman in a travelling band of celibate men, as a prostitute, but the script, bolstered by captions at the end of it, aims to put an end to that historic misrepresentation.

But if she was not a prostitute, could she have had other, more worldly reasons for joining Jesus? Belief is a personal decision, particularly new, potential illegal beliefs. Judas (Tahar Rahim, who has played a prophet himself in A Prophet) eagerly awaits Jesus’ kingdom to be reunited with his family, brutally slaughtered by the Romans. Peter (Chiwetel Ejiofor) is a staunch devotee who is nonetheless shown to be less charitable and selfless than Mary when Jesus sends them off together looking for lost souls. Peter is awed by her humility, but also a bit threatened by this woman.

That Mary’s reason could have been her sexual persuasion, hinted at in the early scenes, is not developed in the film. While she acts like a teacher’s pet, never missing an opportunity to find a place next to him there is no chemistry between them, nor any of the physicality that comes across in Graham Sutherland’s painting.