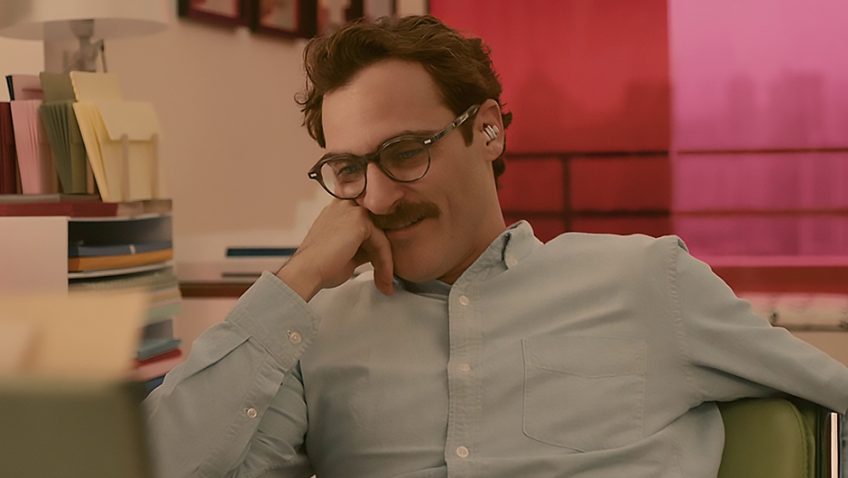 ’ is a Sci-Fi romcom that is not funny, hardly romantic, and less futuristic than the décor would have us believe.

With Joaquin Phoenix (The Master, Walk the Line) in every frame, sporting a thick mustache, nerdy shirts and high-waisted trousers and a disembodied voice (Scarlett Johansson) in an ear-piece as his love-interest, Her

Directing from his own script for the second time after Where the Wild Things Are, Spike Jonze gives the digitized generation a modern love story.  What we don’t get is tension, a plot, a reason to care about the self-obsessed protagonist, or any fresh insights into relationships.

Today, all around us, people prefer checking in with their mobile phones and iPads than in communicating directing with a human being. Jonze goes a few steps further and imagines a Los Angeles of the near future when a few lonely hearts are growing intimate with voices on an artificially intelligent operating system called O.S.1.

One such early adopter is Theodore Twombly (Phoenix). He is employed as a computer bound Cyrano de Bergerac, churning out romantic letters (ironically advertised as ‘hand-written’) for those whose mastery of the language is limited to “#C U 2morrow”.

The conceit that we have returned to the days when labourers would pay scribes to write for them is not as far-fetched as believing that anyone would pay for the clichéd sap that Theodore writes.

An introvert, who is mildly creepy (though not enough to make him more interesting), Theodore is lonely. He cannot find a woman to match his estranged wife Catherine (Rooney Mara) and signs up for a new gadget:  an operating system that offers so much more than computer dating. 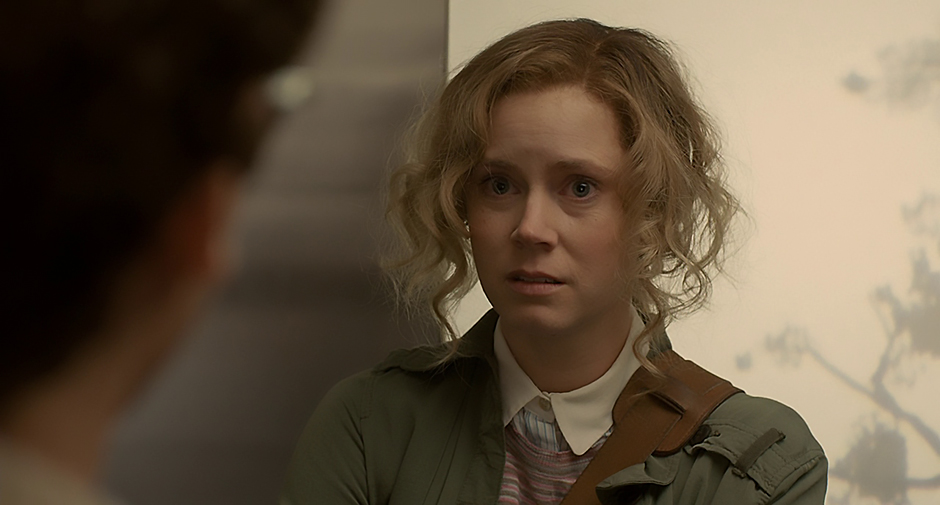 Amy Adams in Her

No sooner has Theodore plugged in his earpiece than a soft, upbeat and submissive voice (Johansson) pipes up, offering to tidy up his ‘hard drive’, and proof-read his letters. Theodore is no Don Draper, but the voice, that names itself Samantha on the spot, is too sexy to remain a mere secretary for long.

She makes Theodore feel like Don Juan. He is overwhelmed when she arranges for his letters to be published as a book – although you half expect his clients to sue the company for breach of contract.

Soon Theodore is taking ‘her’ – and the music Sam writes to help him envisage her – to the beach on L.A.’s new bullet train (Shanghai often doubles for L.A.). They even enjoy a double-date with Theodore’s laid-back work colleague (Chris Pratt).

Theodore is now so confident, that when he meets up with Catherine to sign the divorce papers, he confesses that the woman he is ‘seeing’ is an O.S. It’s almost impossible to believe that Theodore was in a long-term relationship, let alone married to Catherine, a neuroscientist. She is a bit disgusted at the news, but not surprised; he never could relate to real people. 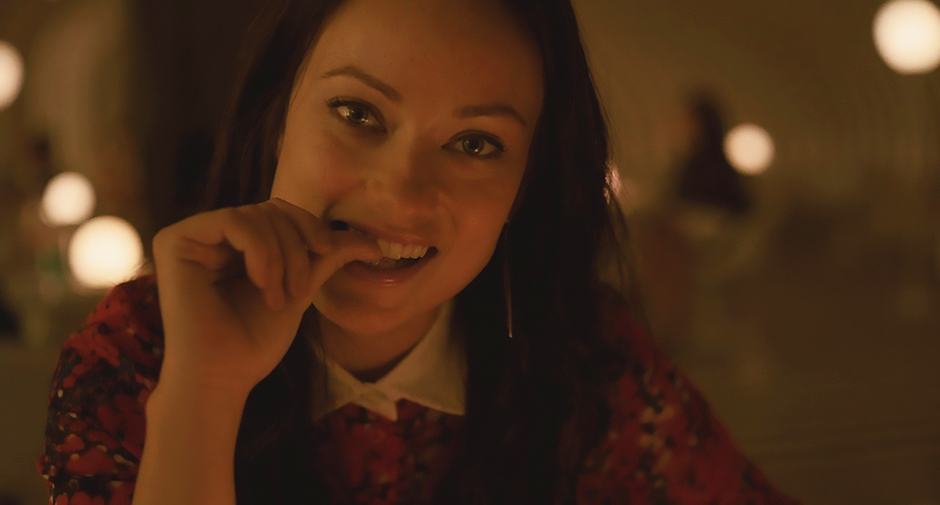 Olivia Wilde in Her

Soon, however, Theodore’s relationship with Sam is on the rocks, too, as this bodiless voice is programmed to evolve.  In a move to parallel the effects of women’s liberation, Sam is taking classes, reading books and, the big blow to Theodore, ‘seeing’ other men.

‘I’m still yours,’ Sam tries to reassure him. ‘But along the way I became many other things.’ Her

seems to be telling us that love means letting one another change and grow.  We know that; but do adults really change that quickly and that much?

Jonze is best known for directing the wild, clever and innovative Being John Malkovich (1999) and Adaptation (2002), both written by Charlie Kaufman. Something of these films survives in Her

, but Jonze hasn’t found a way to make a man talking to a computer fun or dramatic let alone visual.

The ideas are neither profound nor terribly new and the odd couple’s courtship is pretty banal. Maybe that’s the point: that each couple reinvents love by lying in the dunes; but there isn’t much at stake, even if you care about the characters.

Jonze gave Theodore the surname ‘Twombly’, after the late artist Cy Twombly, whose all-white canvas, Phaedrus, was lipstick-stained in a gallery by a female fan, named Rindy Sam.  Ms Sam seemed content to settle for the virginal proxy in the absence of the real thing.  Or, as the Cyrano de Bergerac in Theodore might say, ‘a kiss is a secret that takes the lips for the ear.’