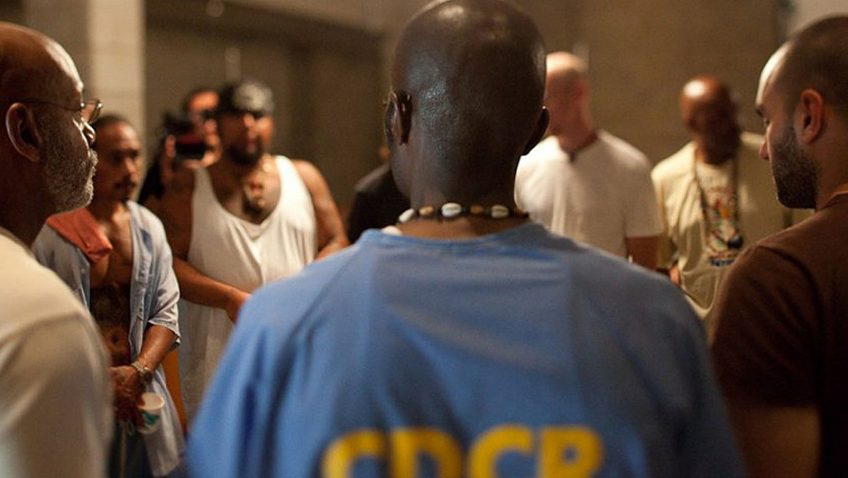 A topical, important documentary on a prison programme that produces results

The prison system in the UK is a mess: overcrowded prisons, increased suicide rates, riots, drugs delivered by drones and severe staff shortages. The situation in the USA is not any better, but The Work

sheds light on one innovative programme in a US maximum security prison that is making a difference.

The title, The Work

, doesn’t give anything away and it’s only halfway through Jairus McLeary’s absorbing documentary that you understand it. The work in question is the effort required to get the most out of group therapy circles held at New Folsom Prison in California. This timely and important documentary about the ground-breaking programme proposed in 1997 by the late Patrick Nolan, an inmate at the prison and to whom the film is dedicated, is not only a must-see for Ministry of Justice officials here, but a thought-provoking, moving experience for us all.

In addition to a weekly support group system, the prison has what are called four-day intensives. Director Jairus McLeary has gained access to one such session in which a group of inmates (some of whom have already been through the process); trained facilitators from all over the world who receive no pay for their work; and selected ‘outsiders’ from all walks of life, break up into groups known as circles and remain together in these circles for four days.

Rather than give us a superficial look at the process, McLeary focuses on four inmates (Manny, Rick, Vegas and Dark Cloud) and three outsiders (Brian, Charles and Chris) in one particular circle. This might have been the only approach to such a sensitive process. In fact, the crew members had to undergo their own intensive four-day sessions as part of their preparation for capturing the experience of others.

What is so remarkable is that outside the sessions the prisoners are often sworn enemies who risk their lives back in the wards by fraternising with opposing gangs or allegiance groups in the group support sessions. So part of the process is to sit next to and not only not harm, but help, a person with whom a prisoner would never associate.

The heavily tattooed and dangerously violent Rick is a member of the Aryan Brotherhood, an organisation that accounts for about 1% of the prison population but 30% of all murders within the federal prison system. He lends his support to Dark Cloud, a member of ‘The Skins’, or the Native American Brotherhood (NAB) and also bartender Charles (a free, ‘outsider’) a large black man from South Central, California whose father was in jail while he was growing up. Charles’ fear as a fatherless black man is ending up in prison, and it is to overcome that fear that he volunteered as an outsider in the circle.

While it is truly moving to witness the spontaneous and unexpected outpouring of emotion from the inmates, and the innovative ways in which the facilitators help them to work through their problems, limitations, and fears, what is most surprising is how much the outsiders benefit from the experience.

Brian has anger management issues prompted by his aggressive reaction to people. He has become unhappy in his life as people close to him perceive him as competitive and judgmental. These problems surface in a natural manner in the sessions, and the prisoners, who might recognise these issues in themselves, help Brian to release his true feelings and come to terms with his need to judge and compete with others in order to validate himself.

Chris remains largely silent and passive until he begins to cry during a session designed to put him in touch with his childhood. Outside, Chris has no direction in life, working as a health food sales agent and a museum attendant in Chicago, as well as attempting to write for a living. He decided to try the programme to understand why he feels helpless, unable to commit and indecisive. The origin of his problem stems from a childhood moment when his father rejected his help building something and sent him back to the kitchen with his mother. The way in which Chris discovers and works through his psychological barrier is astonishing.

The main theme that emerges from the sessions is the impact of fathers on their sons. It is heart-breaking how much violence and how many poor choices have stemmed from a lack of a role model and feelings of rejection due to the absence of a father. A young man named Dante, who is serving over 2 life sentences, longs to see his son. Charles, who grew up never knowing his father, even after he was released from prison, tells the circle that he has made a point of ‘being there’ for his own children and cannot imagine Dante’s pain. Dante, who is suicidal, is only in the inner circle because of Vegas, an inmate-facilitator.

Since filming Vegas had been paroled and his working as a foreman with a traffic control company. He continues to facilitate the Inside Circle sponsored group sessions and is a mentor to a fatherless son through a programme called Shoulder to Shoulder. Dark Cloud has also been released since filming and has found temporary work as a forklift operator while attending Criminal & Gang-Members Anonymous (CGA) meetings. Another released inmate, Manny, obtained his high school diploma and has returned to college to pursue a career in industrial electronics. He continues to facilitate at the prison, Rick has been transferred to a level 3 prison where there are no circles for him to participate in.