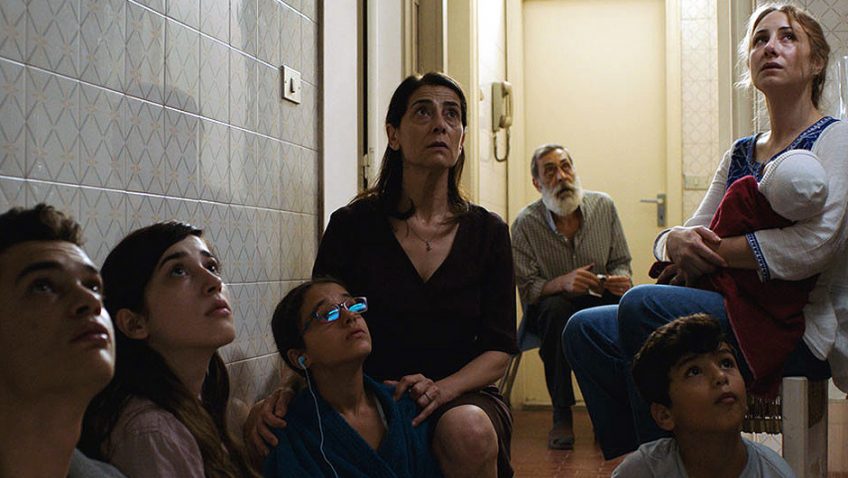 The last liberal, middle-class family left in an apartment building in Damascus is under siege in Director Philippe Van Leeuw’s Insyriated

, a home-invasion thriller set in the war-torn city. For the duration of the film an exhausted matriarch (Hiam Abbass, The Visitor, The Lemon Tree, Munich) tries to protect her family from rockets and local brutes making decisions that will always haunt her. Leeuw wants us to experience first-hand the grim headlines we read in the news and his skilful direction in a confined space is effective. The script, however, feels contrived to force the moral conundrums and it is hard to engage with the underwritten characters.

Oum Yazan (Hiam Abbass) is at home with her daughters, Yara (Alissar Kaghadou) and Aliya (Ninar Halabi); her young son Yazan (Mohammad Jihad Sleik); her elderly father-in-law Mustafa (Mohsen Abbas), and their foreign maid, Delhani (Juliette Navis). Yara’s handsome boyfriend Kareem (Elias Khatter) is also in the house and the two lovers appear to be enjoying their time together. Little Yazan has a special relationship with his grandfather, which is tenderly conveyed. Delhani struggles when she finds there is no more running water in the kitchen tap.

The family is putting up newlywed neighbours Halima (Diamand Abou Abboud) and Selim (Moustapha Al Kar) who have a new baby. Their flat has already been bombed and this extended family contains all the residents left in the building. When the film opens Selim is explaining to Halima (and to the audience, in expository dialogue) the plan for their escape to Lebanon that very night. With their baby between them they are full of hope. We, however, are not, particularly when Selim tells Halima he has to go out briefly – to meet with a reporter – while she is packing. His reassuring goodbye nonetheless has the same ominous ring as Oates’, “I am just going outside and may be some time.”

The story of the occupants of this flat takes place over a 24-hour period as Oum Yazan tries to keep her household in check as the bombs fall and predatory thugs gather at the barricaded door. Like a general she commands the occupants of the apartment to places of safety and barricades the door which she’ll open only when her husband returns. We do not know what he is doing, but we learn that he is delayed in returning by road blocks all over the city. Hiam Abbass in Insyriated (In Syria)

Most of Oum Yazan’s commands are straightforward and strategic, but she has to make a difficult choice early on when Delhani shares with her news of something she saw out the window. The decision that becomes the focus of the film, however, is a more difficult moral question. While she agonises over her decision in the kitchen, we witness the harrowing scene of violence that takes place in the living room where two members of the household are stranded.

Leeuw halts the film to ensure that we agonise with Oum Yazan over her decision, but the scene, though convincing, feels somehow gratuitous. It’s not that assaults are not taking place all over Syria; it is that we wonder why the assailants wouldn’t search the rest of the flat. Surely an internal kitchen door cannot be that much of a barricade?

Last year’s Under the Shadow, set mainly in a worn-torn middle-class Tehran apartment under siege in the Iran-Iraq war, offers a striking point of comparison, although Insyriated

is a realistic dramatic thriller and Under the Shadow is a horror film/thriller set in a political context. In Under the Shadow a fiercely independent mother, forced to drop out of medical school and blocked by the religious regime into returning, has to battle on three fronts, to remain in her flat and protect her daughter when her doctor husband is called to the front. She is determined to remain in her home, even if it means dealing with the outside rockets, Sharia Law and supernatural demons that are trying to steal her daughter.

Hiam Abbass is such a wonderful actress that you could be content to just watch her expressive face all day. Abbass’s character calls the shots in panic like a stock broker realising the bubble has burst, trying to put her decisions behind her, but ultimately unable to. You can feel her terror and her thought processes without the need for words.

That said, we never bond with the characters as we do in Under the Shadow or feel intrigued by and involved in their lives. There are moments when the script slackens and we begin to feel like we are on a stage set instead of in a real neighbourhood. To his credit, Leeuw manages to create fear, tension and a claustrophobic feeling in his directing, but the curiously flat and one-dimensional script is no match and leaves us somewhat detached.