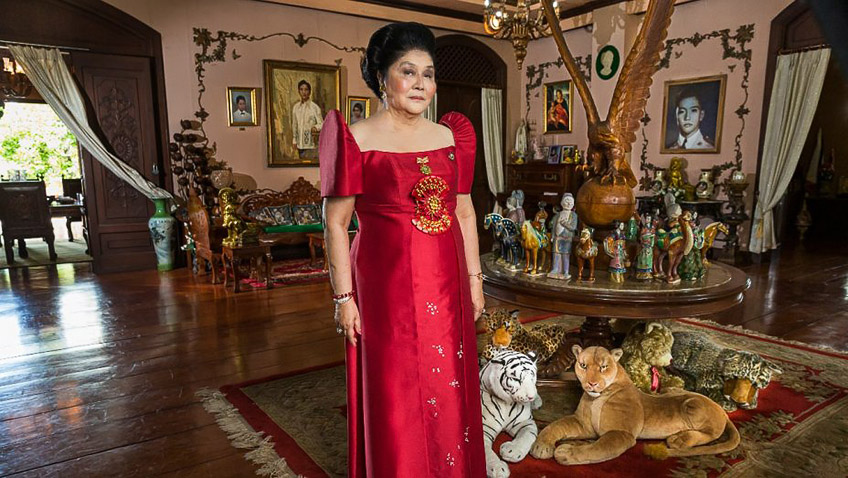 A riveting, spine-chilling profile of Imelda Marcos, the Queen of fantasy Island

Lauren Greenfield is an American documentary filmmaker fixated on the culture of consumerism, wealth and body image. In that regard, it was always going to be a challenge to top her 2012 film, The Queen of Versailles, a profile of former Ms Florida, Jackie Solomon-Siegel, who married a billionaire and set about building the second largest home in the USA, just before the 2008 crash. But the ever-obliging Imelda Marcos, comes to the rescue in this spine-chilling film, masterfully produced and edited. We’ve all heard of Imelda’s 3,000 pairs of shoes, but this collection pales in comparison to the worst of the Marcos family’s crimes against the nation. 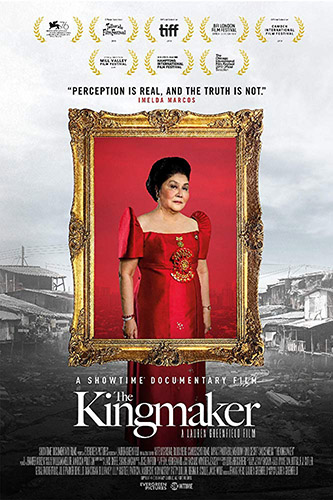 When the film opens, Imelda is being driven through the streets to a children’s cancer centre that she founded when she was First Lady from 1965 to 1986. She hands colourful banknotes to the begging children through the car window, complaining that there were no beggars when she was First Lady. Perhaps she is referring to the time lag necessary for the country to fall apart after the Marcos’ embezzled between them some $10 billion from the general coffers.

As she is driven along, Imelda points out the Presidential Palace, saying, ‘I miss the clout of being First Lady’, before complaining that her husband Ferdinand’s body has been lying in state in his home region of Llocos since 1991, as he was prohibited from being buried in the Cemetery of Heroes.

In the shabby, depressing children’s cancer centre Imelda, wad of cash in hand, distributes money to the children. ‘This government has no soul, no heart,’ she says with disgust, but no intended irony – this from the woman whose husband imposed martial law on his people from 1971-1981 to stop the opposition from gaining power. Later, martyr-like, she confesses: ‘I could not just be a First Lady. I had to become mother of the people and before long, I was mothering the whole world.’ The working title for the film was Fantasy Island and you can immediately see why.

Imelda looks back fondly on the period of Martial Law. ‘That was the best time’, she recalls; ‘the country saw justice.’ Some of Greenfield’s talking heads would disagree, including a male journalist who went underground after the newspapers were shut down; and a teacher who was raped and tortured by some of her own students – planted by the government in her classroom to spy on her. There were 35,000 documented tortures, 3,257 extrajudicial murders, and some 70,000 incarcerations.

Imelda tells us that when Ferdinand noticed her after she was crowned Miss Manilla, it was love at first sight. He built the Bridge of Love, a Manilla landmark, for her and bought a mansion for them in 1946. The lack of privacy there drove her to a psychiatric hospital in New York, from which she emerged the strong stateswoman she became: a kind of Evita Peron wowing the heads of states in an expensive fashion show. ‘Nixon was very nice but misunderstood,’ she says, as if to dismiss Watergate as an unfortunate misunderstanding.

We learn that the main reason Imelda was sent on these diplomatic world tours was to clear the way for her womanising husband to entertain in a manner befitting Silvio Berlusconi. But Imelda was not going to let an errant husband separate her from the wealth and clout that she has always felt entitled to. She tells us she put a tape recorder under the bed and then blackmailed Ferdinand.

Corazon Aquino’s husband, and Marcos critic, Senator Benigno Aquino Jr., had been imprisoned by Marcos for 7 years before being allowed to travel to the USA for medical treatment. But when he returned in 1983 to discuss the deteriorating condition of the country with the ailing dictator, he was assassinated at the airport. Despite electoral fraud, his widow, ‘Cory’ was elected in a popular anti-Marcos uprising in 1986 that effectively ended martial law and saw the Marcos family flee to Hawaii. In 1989 Marcos died in exile. In 1991 Aquino allowed Imelda, then 62, to return to the Philippines with her children and her husband’s body. A fatal mistake.

Aquino had implemented The Presidential Commission on Good Government to restore the rule of law and attempt to repatriate Marcos’s pillared assets to reinvest in the economy. From 2010-2015 this job fell to Juan Andres D Bautista, who has recently fled to America where he lives in hiding. While in office, Bautista filed for a writ of attachment to the paintings (which included a Matisse and Picasso) in Marco’s prestigious art collection. Learning of the writ, Imelda had them removed from the walls and replaced by photos of the family. Bautista notes that a Monet was sold in NYC for $32 million by Imelda’s social secretary.

The last section of the film is perhaps the most important, explaining how Imelda who was elected Congresswoman in 1992, and her dependent son, known as Bongbong, have staged a political comeback. Although Bongbong lost in his expensive, corrupt Vice-Presidential campaign against Leni Robredo, the family has been using their plundered assets to finance a dirty war against Robredo, led by President Rodrigo Duterte, to pave the way for Bongbong to replace Duterte.

Imelda, we hear, ‘was spontaneous when it came to acquisitions.’ In Imelda’s most impulsive acquisition, Greenfield has found the perfect metaphor for this noxious family. Inspired by an African safari, in 1976 Marcos’s purchased giraffes, zebras and antelopes and designated Calauit Island as their habitat, clearing the bamboo to replicate the Savannah. She also cleared out the local population, although we hear from one painfully thin, old woman who remained to see her farm wrecked by the animals. Imelda has not been back to visit her beloved animals in the 28 years since her return to the Philippines. If she did, she might notice how odd the animals behave and look from years of inbreeding in a limited gene pool.

Imelda might have forgotten the poor animals, but not her husband’s legacy and the family name. As protesters are being gunned down in the streets in Duterte’s alleged crack down on drugs, Imelda has succeeded in moving her husband’s body into the Cemetery of Heroes.