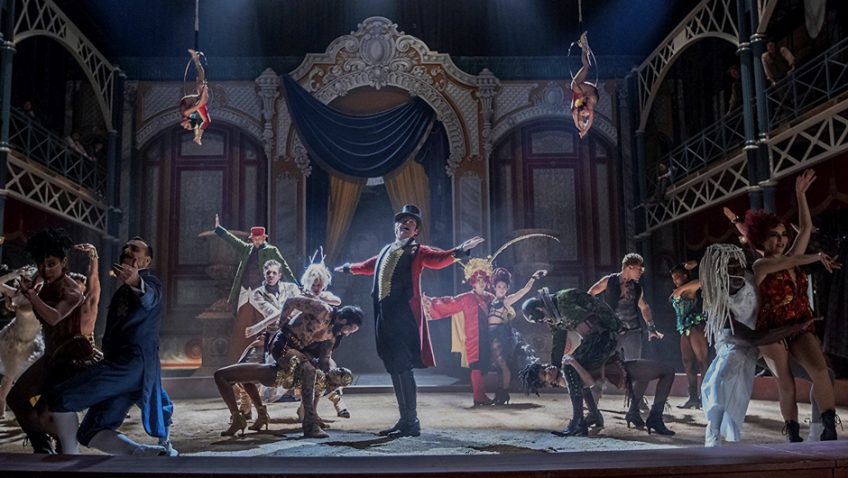 The irresistible Hugh Jackman – as PT Barnum never was

Any chance to see the great showman Hugh Jackman (Les Misérables) in a musical is a treat. So hats off to first time feature film director Michael Gracey for coming up with the idea of turning Jackman’s pet project, the life of PT Barnum, into a musical. Audiences who enjoyed the songs in the popular movie La La Land might also praise the choice of song writers Pasek and Paul – who wrote the forgettable lyrics for that film. The incredible Jackman – whose talent transformed the super-hero movie forever with Logan earlier this year – can convince you of almost anything. Almost – for The Greatest Showman

takes such licence with the truth that believing that the joyful, charming entertainer in this film is the real P.T. Barnum requires a big leap of faith.

All biopics must of necessity compress and sacrifice truth for an intelligible narrative and everyone is happy to suspend disbelief for a great story. But P.T. Barnum as an endearing, harmless rogue and a romantic dreamer is a big ask. And Barnum would be the first to admit that he was not even musical.

Barnum did not become rich by empowering the world’s outcasts, but by exploiting them, as the 19th century public had an unquenchable curiosity in the age of exotic exploration and scientific discovery. And the clichéd Romeo and Juliet story between Zac Efron, as the wealthy actor Phillip Carlyle, and Disney Channel star, Zendaya as trapeze artist Anne Wheeler is as fictitious as are the characters they portray. There is, however, undeniable chemistry between Efron and Zendaya, so let the circus work its magic on you and enjoy their romantic numbers.

After a rousing musical prologue (The Greatest Show) we flash back to young Phineas Taylor Barnum (Ellis Rubin), the impoverished son of an abusive tailor. Class is a major conflict running through the story and PT is determined to win the hand of poor-little-rich girl Charity (Skylar Dunn). Charity defies her father to join P.T. in staking claim to a derelict pile. They sing ‘A Million Dreams’ while imagining the house that Barnum promises his future wife (over her elitist dad’s dead body). Hugh Jackman in The Greatest Showman

Barnum was indeed working class, but his dad was an entrepreneur and his doting maternal grandfather – a legislator, judge, land owner and lottery schemer – was a major influence on P.T. By the time he was 20, Phineas had learned haggling as a shop owner, dabbled in real estate and even started up a newspaper. He left Connecticut when the state banned the lottery – his main source of income

The film catches up with Barnum (Jackman) in NYC, after he has married Charity (Michelle Williams). They have two daughters (Austyn Johnson and Cameron Seely) and are poor, but happy. Gracey delivers some decidedly La La Land dancing on their tenement rooftop as P.T. promises his undemanding wife a better life.

After failing with a wax museum, Barnum embarks on a new ‘museum’ business with real people. We follow him on a recruitment drive in which he convince notable ‘freaks’ to come out of their shells and become rich and famous. Lettie Lutz (Keala Settle) the bearded lady; Charles Stratton (Sam Humphrey), the dwarf performer named General Tom Thumb; The Tattooed Man (Shannon Holtzapffel), and more are celebrated in a film that seems to be heading for a diversity award, as well as a Best Musical Golden Globe.

There’s no age discrimination in this circus which gives us ‘The World’s Oldest Woman’, Joice Heth (Shawn Marshall). Barnum loved superlatives, and a bit of fun. Heth, the public was informed, was the 161-year-old nurse to George Washington. And if you want to enjoy this family film, you better believe it. For the real Heth was a 60-something paralyzed slave who died in 1835, a year after Barnum purchased her for display. General Tom Thumb might have met Queen Victoria and benefitted from a 3-year tour of Europe with Barnum, but the reality is that the little guy was hired when he was four and taught to drink wine and smoke cigars for the amusement of spectators by the age of 8. Keala Settle in The Greatest Showman

Led by the singing talent of Keala Settle, the newly empowered oddities sing life- affirming songs such as Come Alive and This is Me in Barnum’s hugely popular and lucrative funhouse. Gracey’s production and art departments decorate the building with the murals, banners and bright lights that Barnum used to attract passers-by.

In his quest for respectability – again with the notion of class driving him – and to appeal to the upper classes, Barnum takes a big financial risk by offering the famous Swedish opera singer Jenny Lind (Rebecca Ferguson) her first American tour. In the film, the tour ends prematurely when Barnum rejects Lind’s sexual advances! P.T. rushes home to his lonely, despairing wife declaring his love, but lamenting that the tour left him in debt. Lind, a devout Christian who gave the profits from her sold out performances to charity, drove a hard bargain, but in fact, Barnum made a fortune from the tour, recouping his outlay four times over.

What is even stranger about the Jenny Lind episode is that ‘the Swedish Nightingale’ is voiced by ‘The Voice’ star Loren Allred. Instead of opera, she dazzles the crowd with a feminist Disney ‘Let It Go’ type number entitled Never Enough.

When the funhouse burns (or is burnt) down, Barnum has his next brainstorm. real estate in the city is too expensive and buildings burn. So he moves his ‘freaks’, trapeze artists, jugglers and the like to a big top tent near the docks. And, as the film shows, he adds elephants trained to stand on their hind legs. Zac Efron and Zendaya in The Greatest Showman

This is an unfortunate addition as it is public knowledge that Barnum, who was always on the lookout for museums and acts – and almost purchased Shakespeare’s birthplace – bought Jumbo the Elephant. From 1865 the African elephant was the major attraction at the London Zoo where he lived under the care of his adoring handler. Despite public protest, in 1882 Barnum hauled what his publicity machine called ‘The World’s Largest Elephant’ across the Atlantic in a cramped cage. Three years later he was dead – crushed by an oncoming train while being shoved into a freight car for the next stop on his tour. By now, Barnum was a multi-millionaire.

is a big, entertaining, feel-good movie, if you are able to feel good about it. So let yourself go and take the whole family. You might leave the cinema trying to recall the melody of one or two of the exuberant songs.