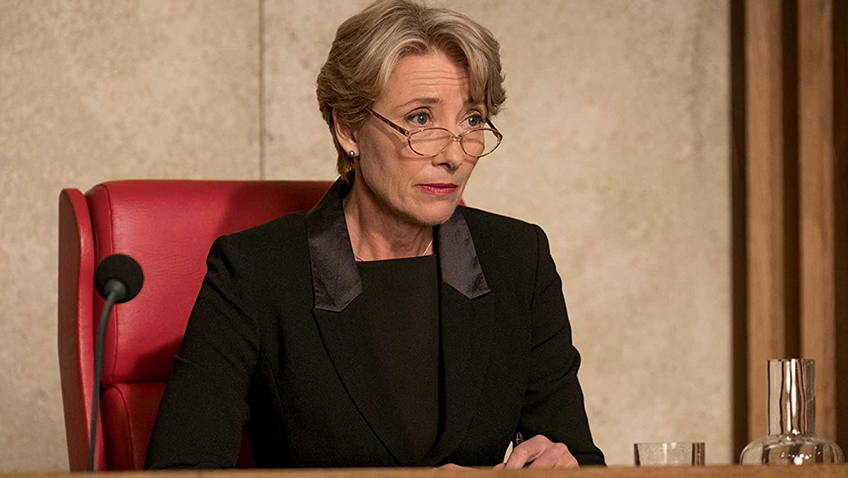 In British filmmaker Daniel Kokotajlo’s debut feature, Apostasy released last month, a dutiful Jehovah’s Witness (JW) in need of an urgent blood transfusion that is prohibited by her religion, has just celebrated her 18th birthday. Kokotajlo, a former JW, gives his character the gift of choice and leaves us to ask if there really is a choice for the daughter of a devout JW whose entire social circle is Church Elders and other JW believers. In Richard Eyre’s (Iris, Notes on a Scandal) film, The Children Act

, based on Ian McEwan’s screen adaptation of his own novel

, Adam Henry (Fionn Whitehead, Dunkirk) is 17 years and 9 months. As such, his choice, and his case fall under The Children Act of 1989 which specifies that ‘when a court determines any question with respect to…the upbringing of a child…the child’s welfare shall be the court’s paramount consideration.’

The film deftly questions whether an objective determination of ‘the child’s welfare’ is possible and where the limits of the court’s intervention – and responsibility- lie. In this handsome, absorbing film, Emma Thompson is magnificent, and the scenes between her and Whitehead (in what is surely his breakthrough role) are electrifying. But on screen the contrivances grate and highlight the novel’s feminist issues that muddy the water of the central moral/legal debate.

All the lights are out in the exclusive block in Gray’s Inn, a short walk from the High Court, except for those on the top floor where sixty-year-old The Honorable Mrs Justice Maye is still busy at work. In a few hours she must deliver judgment on a case of congenital twins because their parents refuse to sacrifice brother Matthew, who is certain to die within a short time, for his brother Mark who, separated, stands a good chance at a normal life. Despite their apostolic names, Fiona will remind her audience that ‘this is a court of law, not of morals,’ before, as she sardonically imagines the press headlines, ‘sentencing a boy to death.’

Fiona Maye’s decision is one of many controversial judgments she makes every day – dispassionately, authoritatively, respectfully and professionally – before slipping out the back door to the avoid the press.

And just when her academic husband, Jack (Stanley Tucci), accuses her of using her workload to shut him out and avoid intimacy, the phone rings with an urgent new case. Fiona takes only a few seconds to gather her wits and rattle off comprehensive instructions to her clerk, Nigel (Jason Watkins) while fighting back the tears. Thompson’s ability to convey her anguish over her crumbling marriage while acting on auto-pilot to ensure the smooth handling of this urgent case is so convincing you could believe she worked as a judge before turning to acting. 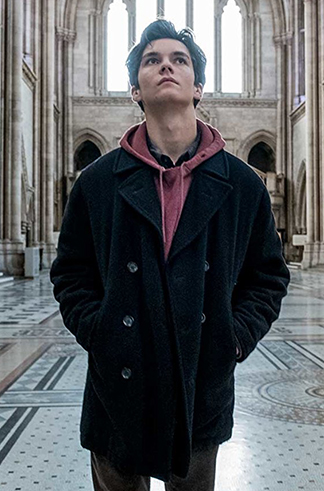 Fionn Whitehead in The Children Act

After hearing the various parties in the case of Adam Henry, notably the parents (well acted by Ben Chaplin and Eileen Walsh), the specialist doctor and, pianist Fiona’s singing partner, the hospital’s solicitor Mark Berner (Anthony Calf), Fiona makes an unusual decision. She will interrupt proceedings long enough to visit the boy in hospital to determine whether his decision to die for his faith was made as an almost-adult or is the result of ignorance and undue influence.

While even Adam’s social worker Marina (Rosie Cavaliero) raises her eyebrows, this visit is instrumental in saving Adam’s promising life. Gasping for breath and white as a ghost, Adam seems to bask in this special attention. He is proud of his decision and seems to be romanticising his sacrificial death. When Fiona points out that the drugs without a blood transfusion could result in a long life of blindness and mental limitations, Adam seems shocked and admits he could not accept that. Then, as Marina grimaces, Fiona asks Adam to play her something on his guitar. After correcting a chord, Fiona spontaneously begins to sing the words to the Irish tune, based on Yeats’ poem, Down by the Salley Gardens. Adam is delighted and amazed at their duet – he did not know there were words. He begs her to stay.

Less successful than the portrayal of the dilemma and the relationship between Adam and Fiona is her marriage with a miscast Stanley Tucci (so great as Meryl Streep’s husband in Julie & Julia). You just cannot see him married to Fiona. 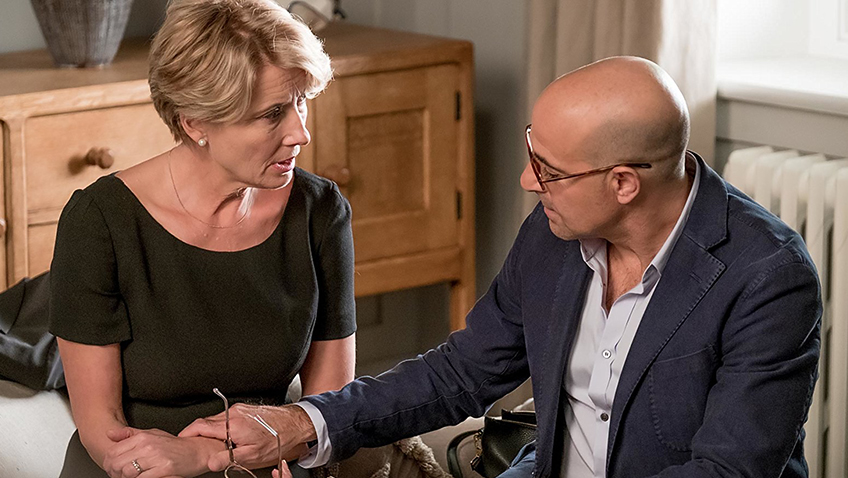 Emma Thompson and Stanley Tucci in The Children Act

But the real problem for some audiences will be that this intelligent woman at the top of her profession is seen struggling to cope with her work/life balance. She works late into the night to the extent that she is pushing away her husband and her marriage is on the rocks. It is not so much the work load as the content of her work – families and children – that is getting to her. On three occasions we are reminded of her longing for children, although many women are perfectly happy with their decision not to have them. Her overstepping the line in terms of her relationship with Adam must, it is suggested, originate with her unsatisfied mothering instinct. Her spontaneous use of a romantic ballad to instil in Adam the will to live is a feminine trait that is the antithesis of law. Note that music-lover Mark Berner, whom Fiona accompanies on the piano, cannot reconcile his personal beliefs with the law and is threatening to quit. Is this why there are so few women judges?

is a clever adaptation of a complex, though short, novel

, and far superior to McEwan’s puzzling script for On Chesil Beach. McEwan – or Richard Eyre – even changed the colour of Fiona’s gown for the piano/singing recital from the colour specified in the novel (black) to an eye-catching green. Never has Emma Thompson looked lovelier. This one costume change has the same effect as Keira Knightley’s memorable green dress in the film of McEwan’s novel Atonement: it lingers in the mind.