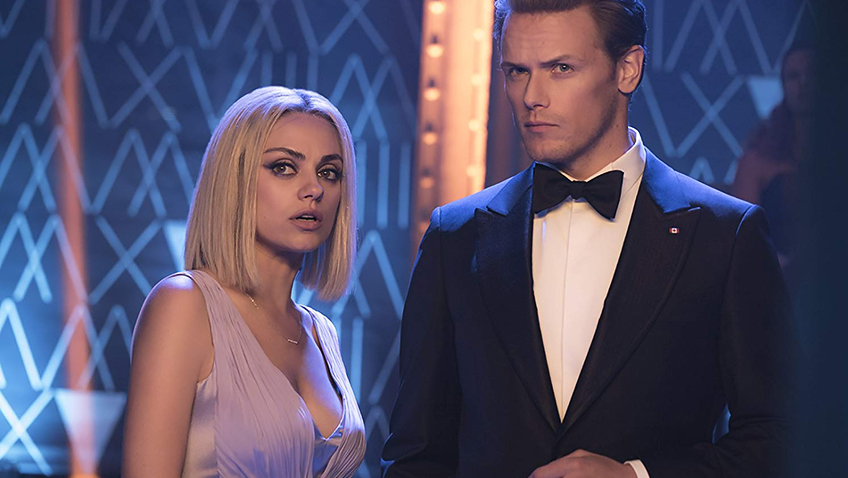 be as good as its title and sustain its winning high concept? The answer is a regrettable no, but the film is not a total write-off and there is a guilty pleasure in watching two female innocents’ abroad caught up in a spy ring, even if the laughs are rarer than a CIA agent you can trust.

Single, pretty, easy-going, thirty-something cashier Audrey Stockton’s (Mila Kunis) boyfriend, Drew (Justin Theroux) whom she met at a birthday celebration in a bar (to which we are flash-backed) has just dumped her by text. The use of dramatic irony is cleverly done because while Audrey and her best friend Morgan Freeman (Kate McKinnon) show him no mercy, threatening to burn his affairs, we see that the dumping is altruistic. Drew is a spy working for the C.I.A. and is running all over Vilnius, Lithuania shooting bad guys and jumping from rooftops to avoid being shot. He finally texts back, asking Audrey not to burn his things and promising to return.

Meanwhile, back in the supermarket, Audrey is picked up by a tall, handsome customer named Sebastian (Sam Heughan) who asks her to walk him to his car although he does not have a large basket of groceries. He flirts with Audrey in his British accent, which she confesses, she mistakes for Australian. Then he turns serious and tells her that Drew works for the C.I.A. and has gone missing. Audrey claims that she has not hear from Drew and goes home, upset.

When she returns, Drew is there. He has returned as promised but to salvage a generic sports statuette that he claims he won in fantasy football and not their relationship. Anticipating that one of the two of them have been followed, he tells Audrey a version of the truth and asks her to accompany him to Vienna to give the trophy to his contact there. Before Audrey can absorb this news they are being shot at. Before dying, Drew asks Audrey to go to Café Sheila in Vienna at 11:00am and give the trophy to a person named Verne, but warns her to ‘trust no one.’ 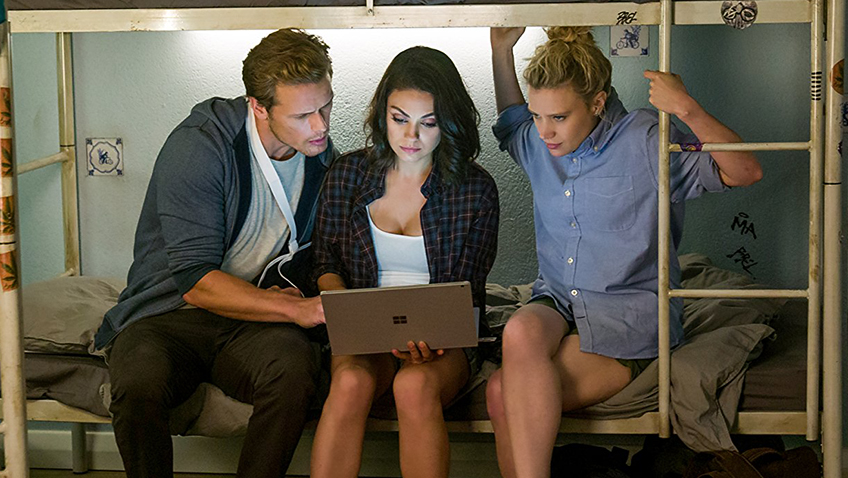 Mila Kunis, Kate McKinnon, and Sam Heughan in The Spy Who Dumped Me

As Audrey is being pursued by dangerous unknowns, she and Morgan speed around the city deciding what to do. Morgan puts the question succinctly: ‘Do you want to die without going to Europe or die having been to Europe?’ and off they go for a non-stop adventure full of twists and turns and a few too many rounds of who do you trust?

There are a few funny lines (when asked about her name being the same as the Oscar winning actor, Morgan says she changed it so she could always get a reservation at a top restaurant) and a promising scene that should have been funnier. In urgent need of a place to crash, Morgan calls home to Freehold, New Jersey. Morgan’s professor father Arnie (Paul Reiser), happily peddling on his stationary bike and her distracted mother Carol, (Jane Curtin) are worlds away from their daughter. The disconnect between the urgency of the situation and the happy-to-hear- from-you parents is a wonderful idea, but the script fails the capable actors.

In what is the most chilling and arguably the most accomplished scene in the film, the friends seek refuge with Arnie’s friend Roger (Fred Melamed), a retired academic, in Prague. The women are relieved to be in a congenial, safe setting, greeted by a kindly, portly, and solicitous man who serves them dinner. But when Audrey feels sick and goes into the bathroom, a big surprise awaits her. 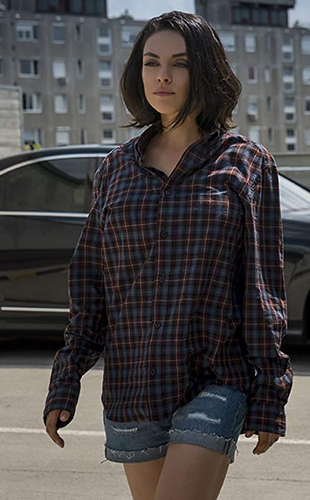 Mila Kunis in The Spy Who Dumped Me

While Mila Kunis (Friends with Benefits, Black Swan, Forgetting Sarah Marshall) is arguably the bigger star and the lead in the film, she is oddly forgettable and not quite into a role that is, in any event, underdeveloped. This is Kate McKinnon’s film and she demonstrates why she is a celebrated sketch artist, even if she is playing a variation of her characters in Ghostbusters (2016), and in the farcical comedy Office Christmas Party (2016).

It is not only the writing that lets McKinnon down but, again, her character. McKinnon is a gay actress and the emphasis on the closeness of the relationship between two best friends here is emphatic. In one set piece Morgan is ready to die on the trapeze to save Audrey against the Soviet killer and former gymnast Nadedja (Ivanna Sakhno), taking on the man’s role in a typical spy film. Is there a reason beside bad taste in men why both friends are single and that Morgan never seems interested in finding a boyfriend of her own?

In Susanna Fogel’s forgettable debut feature, Life Partners, Sasha, a lesbian and Paige, who becomes engaged to a male doctor, are two best friends in their late 20s whose dating interferes with their relationship. Here Fogel has a similar set up but still does not dare to go the distance.

There is already a precedent: Last year Charlize Theron played a pretty convincing lesbian spy in Atomic Blonde, a film with better stunts than we see here, many performed by Theron.

Morgan’s male name and the fact that she is only interested in Audrey are big hints. But there is also a little subplot in which Morgan flatters and flirts with Sebastian’s female C.I.A. boss, Wendy (Gillian Anderson) presumably trying to convince Wendy to hire her. While anything can be made funny, this sub-plot is so half-baked it comes across as more odd than funny. Audiences know that McKinnon is gay and the story certainly suggests that while Morgan will die for Audrey, Audrey’s male friends are more likely to get her killed.