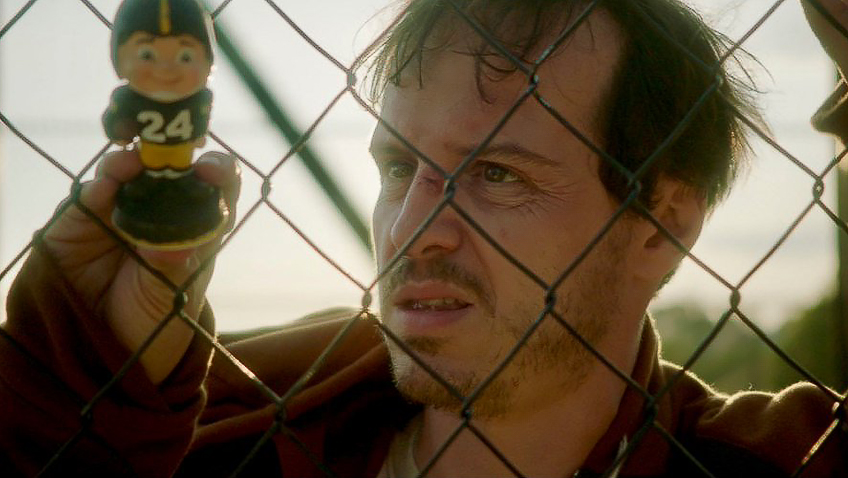 Andrew Scott stretches his range in this character-driven murder mystery

Tyler Zeigler – the boy who goes missing in Steel Country

– is one of those names that sticks to you, like Rusty Regan, the man who disappears in Raymond Chandler’s The Big Sleep

. In the first twenty minutes of British director Simon Fellows’ film, in which Donnie Devlin (an almost unrecognisable Andrew Scott) a mentally-challenged sanitation worker turns sleuth, you are hoping for another Blue Ruin or Frozen River, two of the best American independent films of the Millennium.

Set in an economically and morally challenged former steel town with a cast of colourful characters, a death, a mystery and an offbeat hero, Brendan Higgins’ debut screenplay has all the elements in place. But as Donnie’s increasingly monotonous and contrived investigation becomes more difficult to believe, so our hopes of being left with another great American indie fade.

Tyler is a young boy who used to wave to Donnie from his bedroom window in a quiet former steel town in Western Pennsylvania. And, apart from Donnie’s mother, Betty (Sandra Ellis Lafferty), whom he looks after and with whom he still lives, not many people acknowledge Donnie as he does his rounds in his garbage truck.

His patient assistant, Donna (Bronagh Waugh) is one exception, and though Donnie admonishes her for being careless in her work, what appears as kindness to Donnie might be something more akin to romantic feelings. Donna is always there to help. Donnie does not pick up on this. Nor is he good at any type of subtext.

When a cop he is questioning relentlessly asks Donnie if he has become a reporter, Donnie does not pick up on the sarcasm and replies, ‘no, I still work in Sanitation.’ He has several of the main signs of autism (in particular Asperger’s) with his restricted social interaction, his obsessive nature and repetitive patterns of behaviour, all of which are played out in the film.

Donnie’s 11-year-old daughter Wendy (Christa Beth Campbell) is the other exception and, the bright star in Donnie’s dark life. Their time together is precious to both of them and the depiction of their relationship is charming and tender. Wendy’s mother, Linda Connolly (Denise Gough, excellent), on the other hand, is angry that Wendy is the result of an inebriated one night stand with Donnie. While she begrudgingly allows him to see Wendy, the girl’s surname is Connolly and not Devlin. It is perhaps a mark of his autism that Donnie still harbours hope that there’s a chance with Linda.

While Tyler’s death by drowning is deemed an accident, Donnie learns that Tyler’s mother disagrees. Tyler was too timid to have ventured off through the woods to the creek by himself. When Donnie registers a few more clues that this was not a simple accident as Sheriff Mooney (Michael Rose) claims, he begins his own investigation, following up on clue after clue as one blunt interview question after another leads him on a trail of suspects and incriminating evidence. 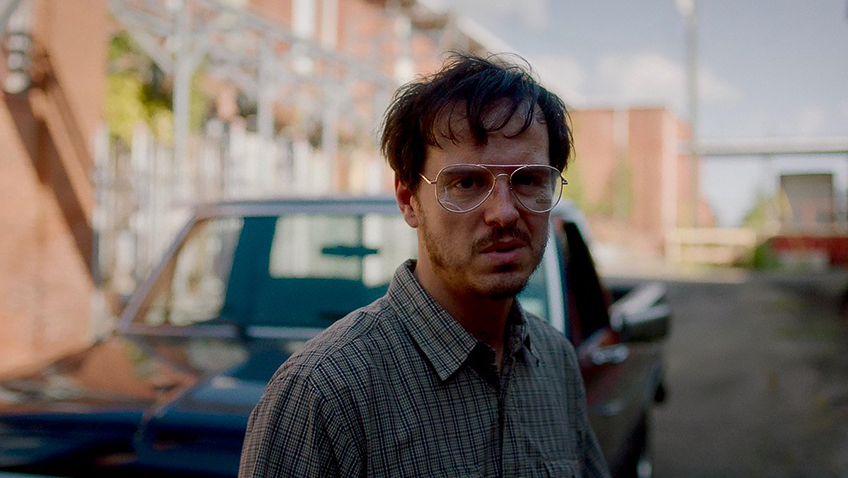 As he questions Max Himmler (Griff Furst), Tyler’s father Jerry (Jason Davis), and a creepy Dr Joel Pomorowki (Andrew Masset), a paediatrician who is paying Tyler (or is it his mother?) too much attention, the theme of child abuse naturally creeps into the investigation, as it does into so many films and TV and streaming series.

Donnie is a mild-mannered guy who wouldn’t, you suspect, harm a fly, but his earnest investigation seems to be irritating people with something to hide. It is not long before his life in endangered. In one attempt, he comes close to be driven off the edge of a bridge. Salvation must come (it’s early in the film), but it does so in one of the film’s most contrived scenes.

Equally convenient is the way in which Donnie is told off and even threatened by those whom he is interviewing just after they have given him vital information. That anyone, guilty or innocent, is inclined to answer a sanitation worker’s questions about a possible murder is strange enough, particularly when the press and the cops are not asking questions. But why are the police so eager to believe it’s an accident, even when there is enough evidence to suggest the contrary?

In arguably the least credible scene in the film Donnie persuades an old school acquaintance, who is now a coroner, to perform an autopsy on Tyler. And, of course, this requires Donnie to dig up the body.

It is in the final, most outlandish scene in the film, however, that what began as a methodical, if irregular, investigation into a six-year-old’s death, turns into a zealous crusade. By now there is enough evidence for any law enforcement agent – there must be one who is not corrupt – to open a criminal investigation, but still Donnie takes the law into his own hands, even if his actions will land him in prison

This raises the issue of motivation and it cannot fail to occur to viewers that Donnie himself might have been the victim of child abuse. This might be why the cathartic, climactic revenge seems so personal. But if this is the case, something in the script, however subtly, must provide a clue. Instead, all indications are that Donnie’s condition is in the autism spectrum.

There are studies that establish a link between physical and sexual abuse and autism, but, though significant, the link is not found in the majority of cases, nor does the study mention if a child’s autism had played a factor in a parent’s abusive behaviour. Since Steel Country

(titled A Dark Place in America) is a character-driven film and Scott’s performance carries the film, it seems odd that the script would leave the viewer to ponder this point in vain.

As for the title, though beautifully captured by cinematographer Marcel Zyskind, the film was shot, not in steel country, but in Georgia, one of America’s most film friendly states. There are Irish and British actors in the film, but the accents are well done and Scott, who is perhaps best known as the brilliant mastermind Moriarty in the Sherlock Holmes films, is commendably convincing as the film’s unlikely hero.