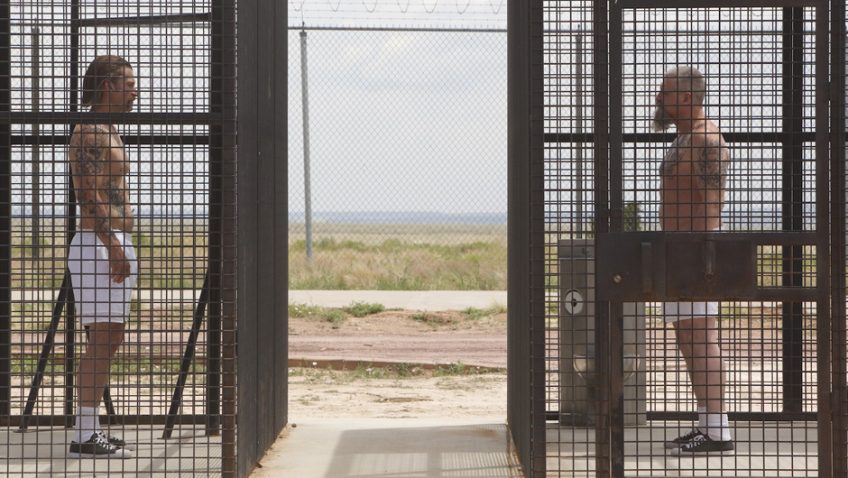 Nikolaj Coster-Waldau calls the shots in this sobering prison thriller

Prison is supposed to be a mix of rehabilitation and punishment, but in either case, designed to discourage a criminal from returning. In the UK, 30% of offenders reoffend within one year of release from prison, and in the USA, where Shot Caller is set, 40% of ex-cons are back behind bars within three years of release. Though far from being a fact-based docu-drama Ric Roman Waugh’s sobering film about one ordinary, unlucky stockbroker’s experience, suggests why this might be the case.

A good looking, heavily tattooed man (Nikolaj Coster-Waldau) in his forties with a horseshoe moustache around a rugged, undemonstrative face sits in a prison cell where, in a voice over, he sends a painfully detached, but loving letter to his son Joshua (Jonathon McClendon). He has not written to Joshua for seven years and, will not be writing to him again. The man is then released on parole: out into the California sunshine on parole wearing a white t-shirt. He is met by a party of tattooed skinheads, including Frank ‘Shotgun’ (Jon Bernthal) a former con and member of PEN1, a neo-Nazi group. They go to a party which is broken up when a prostitute is killed during a drive by shooting. The wrong target. Money is ushered out before the cops arrive, but a snitch puts Money at the scene. His parole officer, Kutcher (Omari Hardwick) calls him in. ‘Not much of an alibi’, Kutcher tells the unruffled parolee. ‘Not much linking me to the place either,’ Money replies.

‘Ten Years Earlier’ and Money led a very different life and had a biblical name, Jacob. Clean shaven, handsome and expensively dressed, Jacob comes home from his investment bank to a lovely, white suburban home and his perfect wife Kate (Lake Bell), who is just about to get a degree from a design course. Their cute little son, Joshua, is eating dinner alone while his mum is getting made up to go out.

This background is formulaic for expediency for Waugh just wants to get the point across before the car accident that starts Jacob Harlon’s (AKA Money’s) nightmare. Jacob is driving home from a boozy night out with Kate and his best friend and colleague Tom (Max Greenfield) and his wife (Jessy Schram) when they all should have been in a taxi. High fiving Tom in the back seat, Jacob runs a light and in the crash, Tom dies. If found guilty, Jacob faces 7 years. Jacob listens to his lawyer who tells him to plead no contest and serve 16 months of a 2.8 year sentence. He also listens to his lawyer who tells him: ‘you’ll be in with the big boys. You have to stand up for yourself. Once you’re marked in there you’re done for.’

It does not take long for Jacob to learn the truth behind this advice. Showed to his bunk in a room with about 100 other men, the only false note in the film is that when Jacob is awoken, not a single man is snoring. The room is quiet enough for the muted sounds of a gang rape to sink in as Jacob turns his back to the horror.

Waugh’s complex structure works brilliantly as he alternates between Money’s life of crime and Jacob’s former life until the two meet, and the former life has all but disappeared. The affect of this flashbacking technique makes Jacob’s journey feel totally credible, as only gradually does Waugh reveal Jacob’s motivations. Until then he keeps us guessing as to whether Jacob has been turned or whether he is a kind of hero, acting out love for the family that he intentionally cuts out of his solitary life.

When Kate comes to visit she tells him that Tom’s wife is suing them for wrongful death. She has savings and is working in a legal firm. He insists that she use the equity left in the house to finish her degree and become a designer rather than work full time in a dead-end job.

Jacob’s first day of prison is an eye-opener when no sooner does he step into the yard then he confronts a black prisoner in a skirmish. Money, as he is called for his former profession, is presented to Bottles (Jeffery Donovan), the shot caller for PEN1 in this Chino prison, and offered protection, but warned that there is a price. Money must do favours when asked, and to say they are all illicit and ugly is an understatement. In a staged prison riot, Jacob impresses his bosses by saving the shot caller for which he has time added to his sentence.

When Kate comes to visit Jacob hands her an envelope containing promissory notes for $178,000 which she refuses. He reassures her that the money is clean and then tells her that she will not see him anymore. The structure within the prison is, like the hierarchy in the French prison in the Academy Award winning film, A Prophet, complicated, as is the assortment of cops and white supremacists outside. We gradually learn that Shotgun is an informant, but what about the young Afghan vet Howie (Emory Cohen) who has smuggled Russian guns back from Afghanistan and is now selling them, a deal that Jacob, now the shot caller on the outside, is in on. If the gang members and cons fall into grey areas, so do the cops.

Throughout, Hardwick finds himself questioning Jacob’s motivations and actions. Who is this man and what is he is really doing? If Hardwick is puzzled, it’s because he does not know about Jacob’s chilling encounter with the Beast (Holt McCallany) whom he meets in a maximum security prison after being caught a bit too easily in an ambush. The Beast has the guards on his payroll, control over the cons in his gang and a hand in everything going on outside, but Money is a fast learner.

The tension never lets up, but Waugh’s film packs its punch steadily, with a minimum of action sequences, no car chases, no CGI and with a reasonably modest amount of gore. All he really needs is his taut script and Danish actor Coster-Waldau who impresses in nearly every role he undertakes, from a cunning hunter and art collector in Headhunters to Jaime Lannister in Game of Thrones. For Waugh’s film is all about tuning us in to the emotional strain on a decent family man forced to become a hardened criminal.