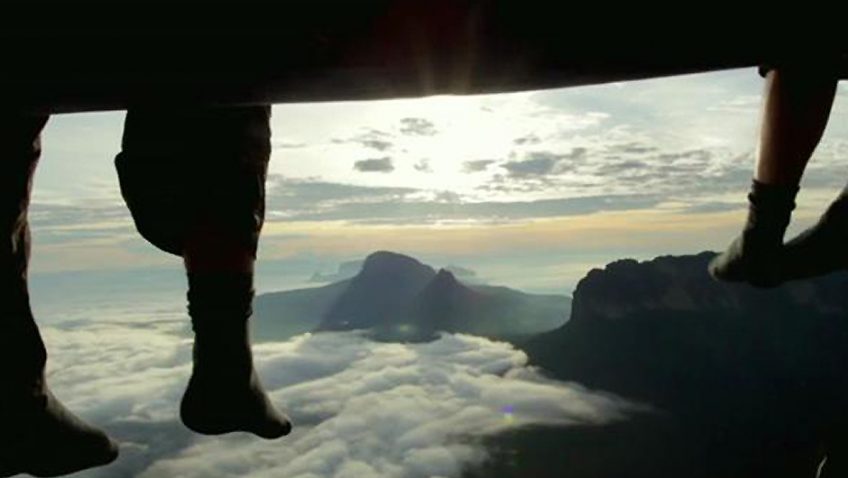 Mountain is a visual extravaganza comprised of footage shot in 15 countries and refined down from 2000 hours to 74 intense minutes. We are treated to shot after shot of astonishing feats of endurance, extreme sports and untouched, indifferent snow-capped mountains along with the occasional avalanche, and a volcano. Many seek out remote nature and mountains for their silence, however, and the powerful orchestration by the Australian Chamber Orchestra, mixing Vivaldi, Grief, Beethoven, Arvo Part, occasionally defeats the purpose. Similarly, while actor Willem Dafoe’s narration from a script by director Jennifer Peedom and Mountains Of The Mind

author Robert MacFarlane is full of poetic flair and truisms, too many repetitive, grandiose passages distract from the meditative visuals.

The film opens with rock climbers on the bare face of a vertical rock, and then gives us a little history of how we evolved from fearing the mountains and worshipping the gods on high, to having an obsession with conquering them. Dafoe explains: ‘Only three centuries ago, setting out to climb a mountain would have been considered close to lunacy. Mountains were places of peril, not beauty, an upper world to be shunned, not sought out. Why do mountains now hold us spellbound, drawing us into their dominion, often at the cost of our lives?’

This question is not entirely answered, but paves the way for a lot of jaw-dropping footage. Forget about those who battle with altitude sickness, frost-bite, queues and adverse conditions on Everest; all over the world thrill-seekers are dropped onto slopes from helicopters (heliskiers); turn double somersaults in the air over ski jumps; and glide like literal batmen, with arms outstretched over ridges and through ravines (wingsuiters). For certain mountain bikers racing along perilously narrow ridges is not enough. We see one cyclist peddling over the cliff edge on a suicide ride that draws parallels with Dilveroo cyclists in central London. But, no, this daredevil cyclist has a parachute and it thankfully opens. Pity that man’s mother.

In some ways Mountain

is a movie for readers of Extreme Sports, Alpinist, Rock & Ice, Mountain Biking, Climber and other niche magazines. These readers might recognise some of their fellow dare-devils or at least know who they are. For while Dafoe tells us that ‘the mountains we climb are not made only of rock and ice, but dreams and desire’, no one tells us the name of the man (is it Nik Wallenda?) tightrope walking across a deep abyss between two red rock formations or where he is. We can appreciate the film without knowing names, but some information about when, where and what we are witnessing would seems fundamental if only to satisfy out curiosity.

Jennifer Peedom also directed 2015’s excellent Sherpa and 60% of the footage has been shot by Sherpa cinematographer Renan Ozturk. Sherpa was a documentary critical of the commercialisation of Mount Everest and the Sherpa’s raw deal. Mountain is a tribute and celebration as well as a warning that mountains demand and deserve respect.

Peedom does cover ground from Sherpa, and as we watch exhausted climber queue up at a bottleneck near the Summit of Everest, Dafoe angrily exclaims: ‘this isn’t exploration, it’s crowd control; this isn’t climbing, it’s queuing.’ That said the inclusion of scenes highlighting this commercialisation is germane to the message that as humans are succeeding in ‘replacing mystery with mastery and ‘risk has become its own reward’, the mountain continues to take the lives of those for whom ‘fascination replaces trepidation and ‘adventure replaces reverence.’ Shots from Sherpa showing the 2015 avalanche that left 19 people dead, 10 of whom were Sherpas and 5 of whom were foreign climbers provide a sobering reminder why mountains should still instil fear and reverence.