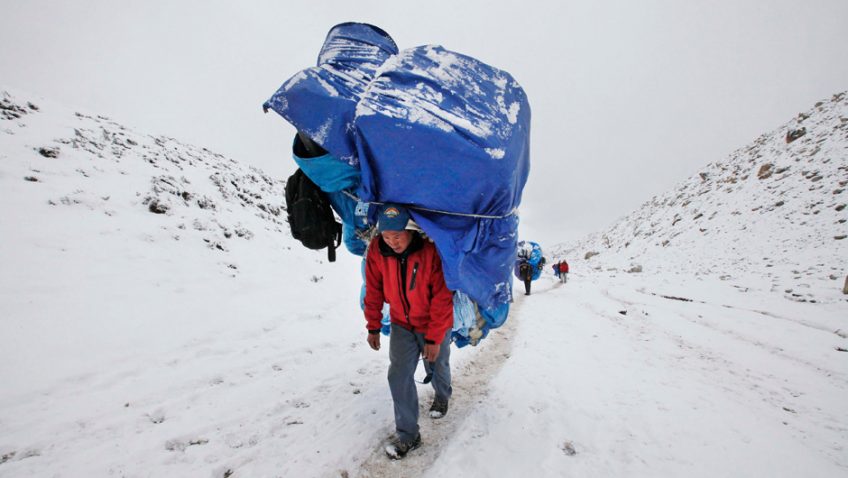 Sherpa, we learn at the beginning of Jennifer Peedom’s beautifully shot, sobering and thought-provoking documentary, is not just a trusted guide and pack-mule-for-hire who allows pampered foreigners to believe they are conquering Everest on their own. Sherpa is the name of a Tibetan ethnic group from the slopes of the Himalayas in eastern Nepal. For them Everest is not a peak to be conquered but the sacred Chomolungma: the mother god of earth, whose head is not there to be walked on.

Peedom’s film is a good companion piece to this year’s Everest, a drama about the disastrous 1996 excursion, told from the point of view of adventure-seekers who pay around $75,000 for a package adventure holiday-of-a-lifetime. In Sherpa

, we see the increasingly commercialised Everest Experience from the Sherpas’ point of view and it’s not a pretty sight.

Tenzing Norgay put the Sherpa on the map when he ‘summited’ with Edmund Hillary in 1953, but the major medals, money, publicity and accolades have always been reserved for the foreign ( primarily European, New Zealand, Australian, North American and Japanese) adventurers. Climbers who pay large sums of money to the tour organisers expect the Sherpas to act like personal valets, smiling respectfully while assuming most of the risk.

Then in 2013 a brawl occurred in which European climbers fled a mob of angry Sherpas. The following year, Peedom and her crew embedded with Himalayan veteran tour organiser Russell Brice to investigate the origin of the brawl from the Sherpas’ point of view. Brice’s team of 25 Sherpas was headed by Phurba Tashi, who is, like Brice (for whom he has worked since the late 1990s), a veteran. The 2014 expedition would have been his 22nd; a record. Tashi makes $5,000 if Brice’s clients reach the summit, and next to nothing if the climb is aborted.

While the foreign climbers are adjusting to the altitude in comfort and out of harm’s way, the Sherpas are busy preparing the way. Burdened with heavy provisions and equipment they must travel – often back and forth – through the notorious Khumbu Icefall – a shifting river of ice and one of the most dangerous obstacles en route to the summit. To minimise the risk they travel at night when the unstable ground is most likely to be frozen. Once the sun rises the risk of avalanches escalates.

At 6:45am on April 2014, a 14 million kg block of ice crashed onto the Sherpas’ route, killing 16 Sherpas. This was worst single tragedy in the history of a Mountain that has claimed some 240 lives. Phurba and most of Brice’s Sherpas survived, but they all knew many of the dead.

Peedom, who has already made ‘Miracle on Everest’ and ‘The Sherpa’s Burden’, strikes gold here, capturing for posterity an extraordinary denouement to the Khumbu tragedy. Sherpas, united by fear, grief and resentment, stand up to their employers and the government that depends on the $350 million revenue from climbers. They succeed in effectively closing down the mountain. But Peedom encourages us to feel there is more to the situation than meets the eye.

While Brice and his clients appear to be mourning the tragic loss of life, Brice is telling the camera – and his disappointed clients –that a minority of bad apples instigated the Sherpa revolt and were now threatening to ‘break the legs’ of any strike breakers. One of Brice’s client’s, who will have to forego his substantial financial outlay and try again next year, brands the rebel Sherpas ‘terrorists’, and on that basis, accept Brice’s rationale for calling it quits. Phurba, who shows up for a post-tragedy meeting with Brice, claims to be unaware of such threats against him or his team.

As tensions run high Phurba has to make a major decision. As dependant as his wife is on Phurba’s comparatively superior salary for the children’s education and security, she realises that if Phurba dies on the mountain the family would have nothing at all. Should Phurba gamble on the world’s record and another $5,000, or follow in his father’s footsteps and return to Yak breeding and farming?

There have been many films, primarily documentaries, about Everest, but Sherpa

is arguably the most revealing. Peedom, her high- altitude director and cinematographer Renan Ozturk and her producers provide the clearest picture yet of the physical, cultural, political and commercial tensions that risk undermining the Sherpa/Employer relationship – not to mention the future of the region’s major cash cow.