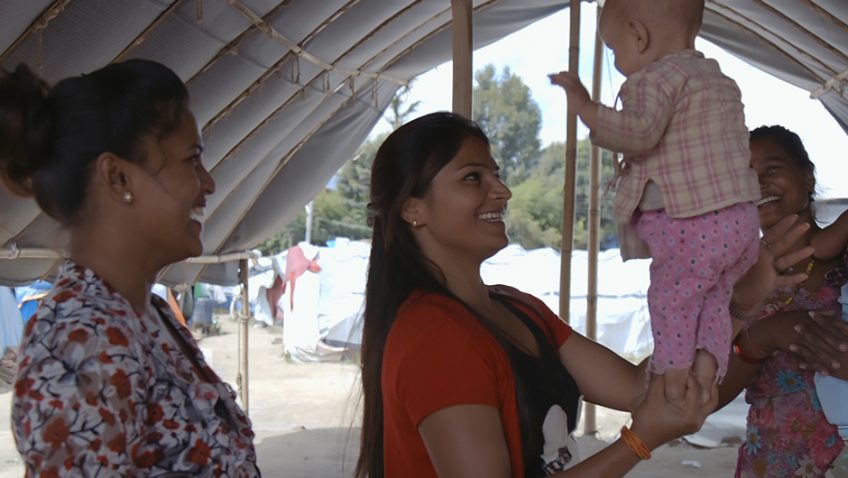 Even When I Fall is a riveting and incredibly moving documentary that somehow, like the two amazing women whose stories this is, turns tragedy, abuse and loss into something life affirming and beautiful. Directors Sky Neal and Kate McLarnon spent six years following two trafficked Nepalese girls from a circus in India where they had grown up; to a refuge centre in Nepal after their rescue; and in their independent lives in Kathmandu. The cliché ‘make the most of what you have’ takes on a new meaning as we watch these traumatised, impoverished and illiterate young people use the only thing their childhood has left them – their circus skills – to find a means of survival and a purpose in life. 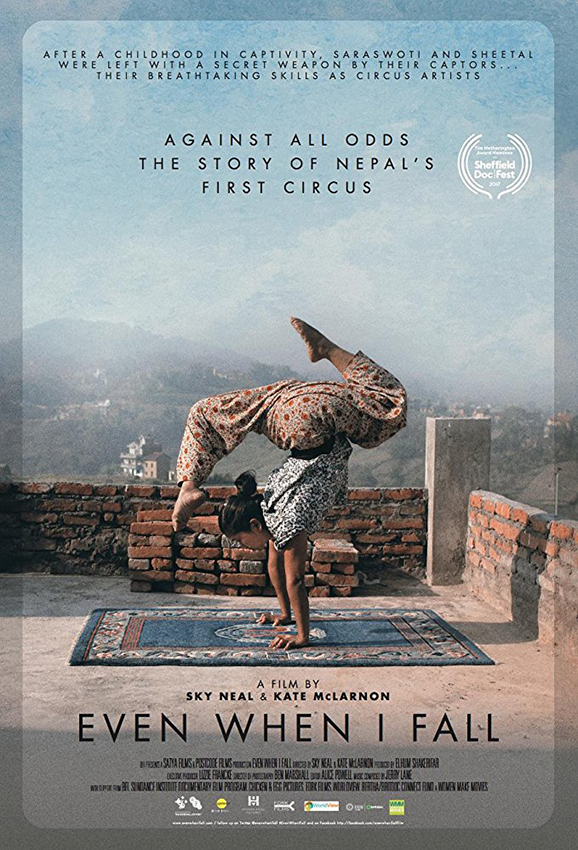 The lovely title is from a quote from Saraswoti, who was trafficked to an Indian circus at age 8 and trained on the aerial silks. In a sentence that takes on a metaphorical meaning in this powerful film, she tells us: ‘The silks look dangerous…The move I like most is the drop. The body looks like it’s broken. But even when I fall, the silks catch me.’

The bodies of the young Nepalese girls and boys from deprived, uneducated families end up, if not broken, abused in the many unregulated circuses owned by unscrupulous Indian entrepreneurs. Saraswoti was lucky: she was married to the owner’s son at 14, and her ‘life was a little bit easier.’ But at 15 she had twin sons, with another son born shortly before the untimely death of her husband.

Unbeknown to Saraswoti, her parents continued to search for her (her father passed away) with the help of various charities. After 14 years, we are there when she is awoken one night by noise, commotion and the police to learn that she is being rescued and returned to Nepal. The directors capture this difficult transitional period and the mixed feelings they have about their future in Nepal. Saraswoti’s family live in one rented room and cannot accommodate her. She is plagued by the uncertainty of life in the refuge while worrying about supporting her sons without an education.

Until the unexpected rescue operation, Sunita Sunar (Sheetal) never knew where she came from or who her family were. She was taunted in the circus for being an orphan. Having found her family means she has ‘people’ and legitimacy. Sent away with an older sister (who is still believed to be somewhere in India) when she was four, her reunion with the mother who sold her ‘out of ignorance’ is painful to watch. In a separate scene, Sheetal tells Saraswoti in a tête-à-tête, that since she grew up without love, she does not know what it really is. Sheetal has, however, found a husband – whom we briefly meet. 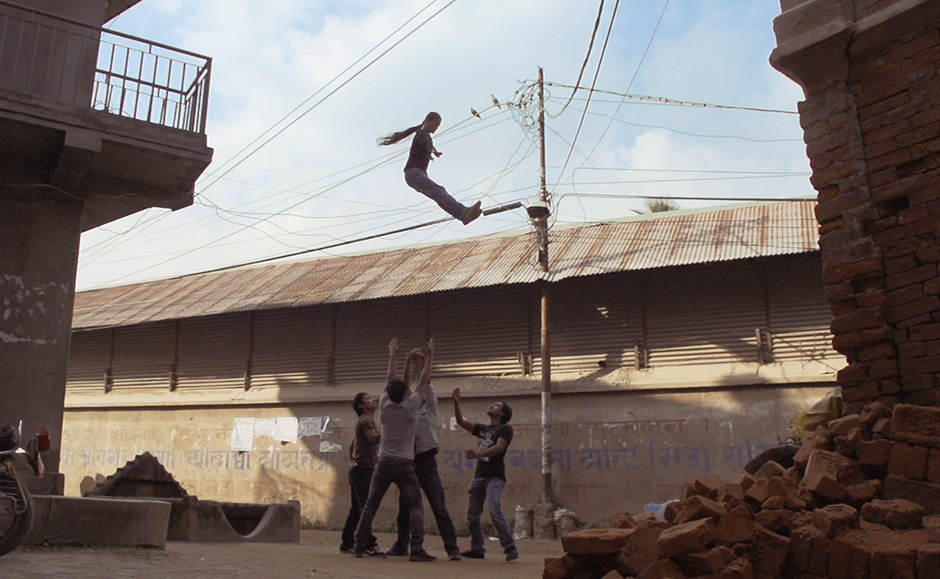 Like all the trafficked children, Sheetal was beaten in the circus and was not paid. Nor was the circus owner responsible for injury or death. Yet during their time in the refuge, Sheetal and Saraswoti admit to being unhappy. Despite the horrendous working and living conditions, they consider the Indian circus their home and the other circus children their family. That nostalgia for the familiar fades once the two girls are reunited with their mothers and, crucially, when they find a purpose in life.

With no education and no prospects, Saraswoti, Sheetal and eleven other young people with their own agonizing stories to tell decide to do what they know best. At the refuge they had been continuing their acrobatics as therapy. Eventually, the young adults decide to form the Circus Kathmandu and finally make a little money. 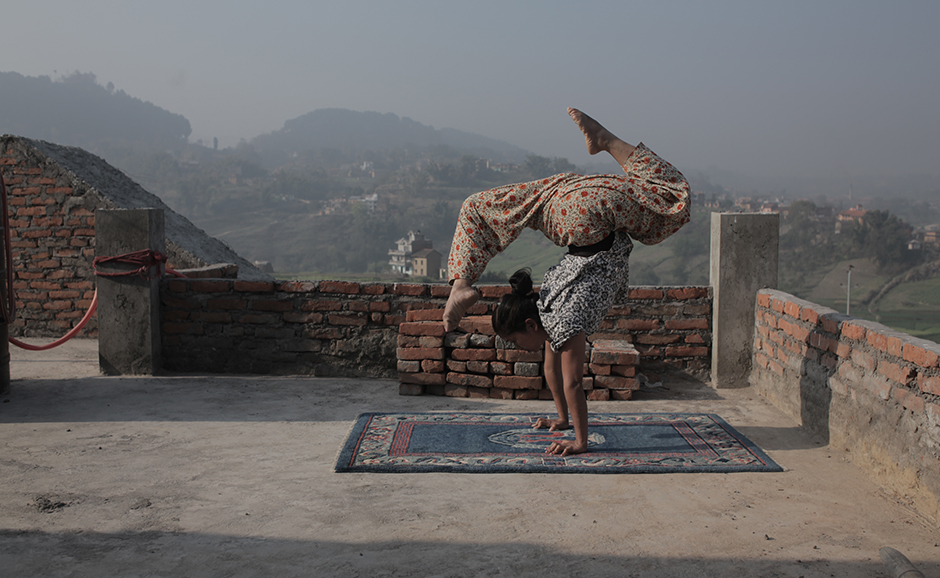 This might sound like an obvious thing to do but there is no tradition of circus in Napal. On the contrary, the circus is associated with trafficking, prostitution and loose morals. No decent people, let alone married women or mothers belong in the circus. Through incredible discipline, sacrifice and hard work, they break down those taboos and cultural barriers and make a name for themselves across Napal.

What is even more extraordinary is that their performances were, from the outset, designed to serve as a means of raising awareness of trafficking. The performers overcome their shame to warn parents and children so that others will not suffer as they did. At the end of their exhausting sessions they remain to engage the children with acrobatics while trying to convince them that going abroad is not the solution. 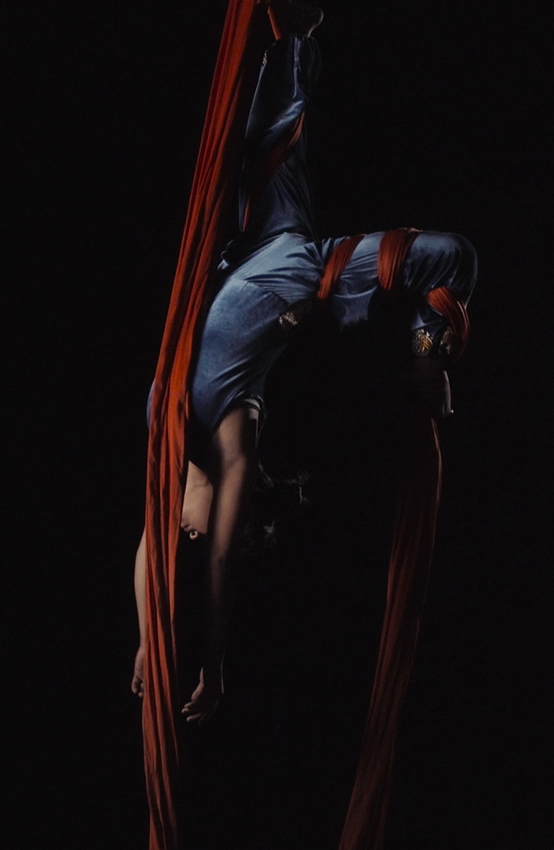 Their young lives are a series of challenges. Obtaining a travel visa proves to be a protracted process, ironically because of their history. Eventually the team see much more of the world than they did in an Indian circus. They wow Dubai in 2014 and encounter a triumphant reception at the UK’s Glastonbury Festival where they have their first glimpse of the competition. If they cannot compete with the well-funded European and Chinese circuses, they are distinguished by their unique stories.

The troupe has just landed in Australia when they receive the news of an earthquake that destroyed much of their country and nearly 9,000 of its inhabitants. As one young male acrobat laments, ‘what little Nepal had was put on the funeral pyre.’

Upon their return, they set about rebuilding their lives and the lives of others. They entertain the homeless to help them to ‘forget the pain for a while’. As the risk of trafficking increases with the new depths of poverty and despair, Saraswoti develops a sophisticated interactive play to get her message across.

This natural linkage of entertainment, education and community outreach is the most remarkable aspect of Circus Kathmandu and is a tribute to the maturity, strength of character and altruism of these young adults. No one has time for self-pity. Saraswoti is so frustrated with her own illiteracy that she embarks on a crusade to make the education of all children in Nepal a priority in her life. Take your children and grandchildren.